Sporting News
Share on FacebookShare Share on TwitterTweet
The USMNT beat Mexico 3-2 in a dramatic CONCACAF Nations League final in Denver. Christian Pulisic won and converted a penalty kick deep into extra time to cap a heroic performance from the USA, which was forced to come from behind twice to force the extr 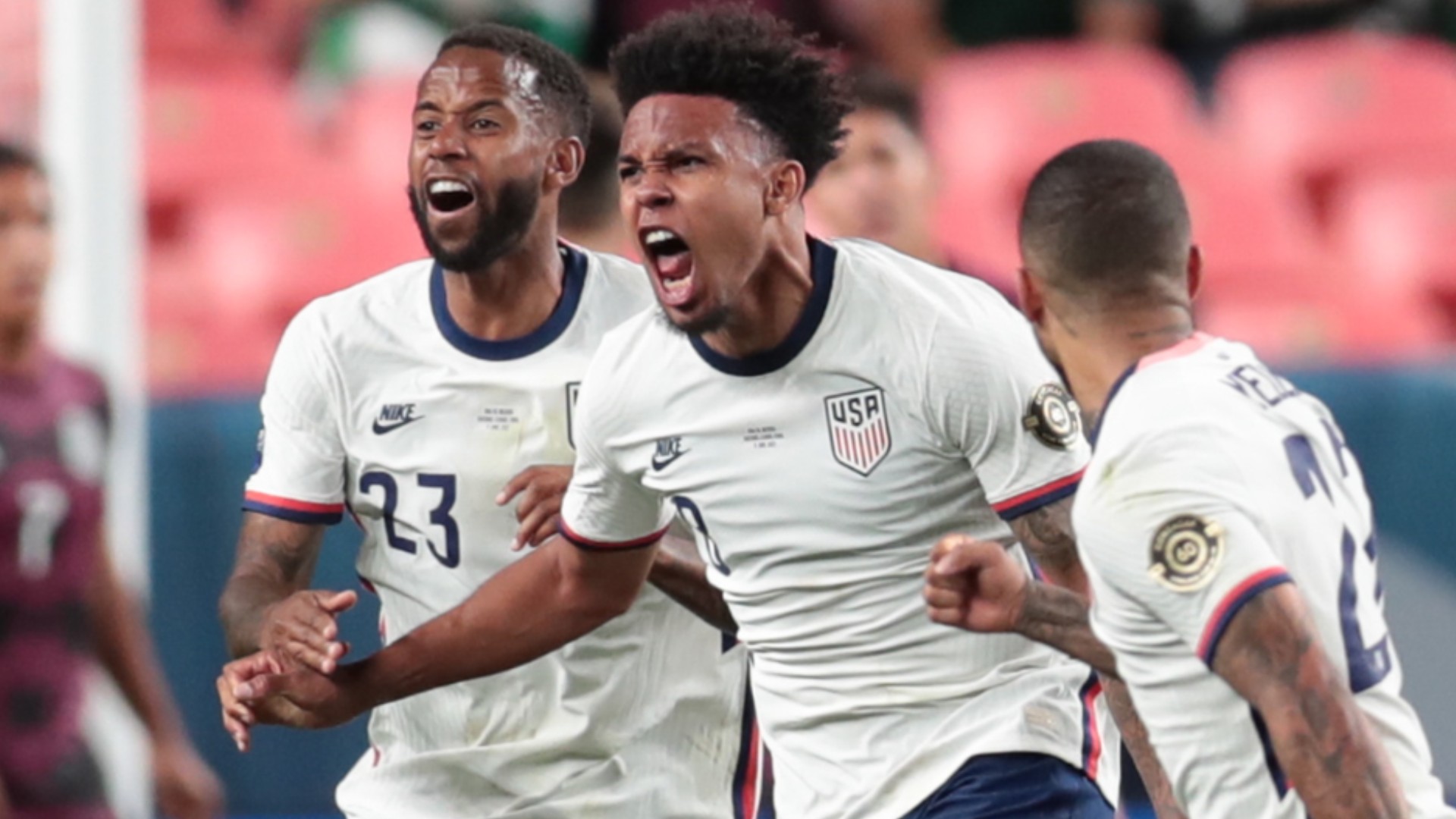 USA vs. Mexico never disappoints. And the inaugural CONCACAF Nations League final had it all.

A Christian Pulisic penalty-kick goal deep into extra time gave the Americans a thrilling 3-2 win over their archrivals Sunday night in a wild match with plenty of twists. Pulisic, who donned the captain's armband for the match, earned the penalty after he was brought down on one of his patented darting runs into the box. The referee went to the monitor to review the play and awarded the late spot kick, which Pulisic stepped up to convert into the top corner.

But it took an incredible penalty-kick save from USA backup goalkeeper Ethan Horvath to seal the deal in the dying moments of the match. The referee went to the monitor a second time and awarded Mexico a penalty kick for a Mark McKenzie hand ball. With seconds left in extra time, Mexico’s Andres Guardado took the attempt, only for Horvath to deny him at full stretch in a dramatic twist.

Horvath came into the match in the second half after starting goalkeeper Zack Steffen was forced out with an injury. He produced multiple big saves off the bench, including the clutch penalty-kick stop at the end of his heroic performance.

The USMNT came from behind to equalize twice during regulation before taking the lead for good in extra time.

It looked as if Mexico had scored a potential game-winner in the 79th minute through substitute Diego Lainez, but the U.S., which was dominant on set pieces all night, tied it 2-2 on a potent Weston McKennie header just three minutes later. The extra session saw the two video review incidents, a penalty-kick save, an ejection of Mexico manager Tata Martino, a pitch invasion and incidents of fans throwing projectiles at players, one of which injured U.S. forward Gio Reyna.

ET - 127th min.: There are five minutes of stoppage time and there's likely more to be added after fans invade the field.

ET - 124th min.: And Horvath stops Andres Guardado penalty kick! What a save!

ET - 122nd min.: And the referee gives the penalty kick! Andres Guardado stepping up to take it.

ET - 119th min.: Mexico get a shot off in the U.S. box and they're claiming there was a hand ball on the play committed by Mark McKenzie. The referee is going to have a look at this one, too.

ET - 116th min.: Fans in the corner threw debris at the celebrating U.S. players. And Gio Reyna, who was previously subbed out of the game, was hit in the head with a projectile. He needs to be helped off the field.

ET - 113th min.: That was wild. While the referee was at the monitor, Mexico manager Tata Martino put his hand around the referee and he was sent off!

ET - 110th min.: Didn't look like there was enough contact, but the referee went to the monitor and just awarded a penalty kick to the USA!.

ET - 108th min.: Pulisic goes down in the box and U.S. fans want a penalty. The referee has a look at it on the monitor.

ET - 106th min.: The final 15 minutes of extra time are underway. Is there one more moment of brilliance from either side?

ET - 106th min.: SUB - The USMNT brings on Reggie Cannon for DeAndre Yedlin at right back.

ET - 105th min.: Lainez trying to make something happen. He had a shot over the bar and a low cross stopped by Horvath. Lainez has plenty of gas left in the tank.

ET - 102nd min.: Horvath comes up with another stop. This time off a stinging shot from Lozano, who's still so dangerous more than 100 minutes into this one.

ET - 98th min.: Weak header by Henry Martin on a cross in the box. It's an easy snag by goalkeeper Ethan Horvath.

ET - 94th min.: Hector Herrera, who's already on a yellow, deserved a second one for a late, studs-up foul on Tim Weah. But the referee spares him.

99th min.: The match resumes with a dropped ball. But we're heading to extra time!

96th min.: The homophobic chant by Mexican national team fans leads to a stoppage in play. The teams huddle at the center circle at the direction of the referee.

93rd min.: Hector Herrera gets a yellow for a late lunging challenge on the U.S. 'keeper. The teams come together and DeAndre Yedlin also sees a yellow.

92nd min.: Another amazing stop by Horvath, but it wouldn't have counted.

90th min.: Big save by Ethan Horvath! Lozano, who's out on the left, curls the ball with his right foot but Horvath gets to it, conceding a corner. Seven minutes of stoppage time!

88th min.: Tactics reset for the USA. They're in a 4-3-3 with Lletget-Adams-McKennie in midfield and Kellyn Acosta playing left back.

86th min.: Mark McKenzie shown a yellow for kicking Lozano. The U.S. defender was late on that challenge.

83rd min.: Tyler Adams and Sebastian Lletget are brought into the game by the U.S. with extra time a real possibility at this point. (Unlike the semis, this game won't go straight to penalties.)

82nd min.: And the USA respond with McKennie! He heads home a corner kick that was needlessly conceded by a clumsy move near the end line by Chaka Rodriguez.

79th min.: Lainez does it! Just seconds after coming on, Lozano feeds him the ball wide right and he shoots between three U.S. defenders to put Mexico ahead.

78th min.: Mexico with an attacking sub. Diego Lainez comes on for Uriel Antuna. Lainez can bring a spark.

76th min.: The U.S. are dangerous on another corner kick. This time it's McKenzie with the header, but it's right at Ochoa.

71st min.: Amazing save by Memo Ochoa! McKennie with another corner kick header on goal, but Ochoa got to it.

70th min.: Luis Romo misfires badly in the box on the first chance after the restart of play. We're going to have a good amount of stoppage time coming up.

69th min.: Steffen is being helped off the field. Ethan Horvath comes on. The USA makes another sub: Jordan Siebatcheu is on at center forward for Josh Sargent.

66th min.: While the U.S. has still not made the sub at GK, Mexico makes two of its own. Luis Romo for Charly Rodriguez in central midfield. Henry Martin comes in at forward for Tecatito Corona, a move which will push Chucky Lozano wide.

65th min.: Zack Steffen crumbles to the ground after intercepting a through ball. It doesn't look like he'll be able to continue. Backup Ethan Horvath warming up.

62nd min.: Pulisic with a run down the middle, feeds McKennie for a shot which the Mexico 'keeper saves. Sargent can't pounce on the rebound.

60th min.: SUB - U.S. bring on Timothy Weah for Sergino Dest. No one could have predicted Dest as the first player subbed off in this game. Weah to replace Dest at left wingback.

58th min.: A U.S. corner kick reaches Dest on the left side and he volleys the ball wide of the target.

57th min.: More danger from Mexico. This time it's a good play by McKenzie to stand his ground against Tecatito Corona who blast a shot off the defender inside the box.

56th min.: Mexico's Charly Rodriguez lofts a shot over the bar in the first real attempt of recent minutes. Both teams playing cautious to start this half.

49th min.: Yellow card shown to Kellyn Acosta after his tough challenge leads to a minor dust-up between the two sides.

46th min.: Second half is underway. No changes from either side.

Halftime: You've got to imagine that Gregg Berhalter is trying to use the break to figure out how to get his captain going. Christian Pulisic is operating a little more centrally, giving the left flank to Sergino Dest, who's also been quiet. Tough to imagine the U.S. winning without those two involved.

Halftime: A gaffe by Mark McKenzie leads to a 2nd-minute Mexico goal and it looked like El Tri had a second with Moreno's header, but it was called back for offside. And just moments later Reyna scored. The nixed goal and the Reyna put-back proved the turning point of the first half, though Zack Steffen had to come up with a big stop just before halftime.

43rd min.: Great save by Zack Steffen on Chucky Lozano and Herrera saw his header go wide on the ensuing corner. Big save by Steffen just before halftime.

40th min.: Uriel Antuna has been particularly active over the last five minutes and his ball into the box finds Chucky, who can't connect cleanly on a first-time half-volley.

38th min.: Sergino Dest and Christian Pulisic are having a quiet game, but U.S. still finds itself even with Mexico. Not a scenario many would have predicted after that 1st minute goal.

35th min.: McKennie wins a ball in midfield and springs Reyna, whose quick cross in the box just misses connecting with Sargent.

34th min.: Tough moment by McKenzie who's caught on the ball again and it almost results in another Mexico chance.

33rd min.: Another ball over the top by Moreno for Chucky Lozano, but once again the pass is just a tad long.

27th min.: And just like that Reyna equalizes for the USA! McKennie heads home a corner off the left post and Reyna is there at the doorstep to put it home. 1-1.

24th min.: Bad defending by the USA. Poor marking leads to a Mexico corner kick and a wide open Moreno heads home a cross on the ensuing play for a goal. But it's ruled offside after video review.

21st min.: U.S. fans booing because they wanted a penalty called for a challenge on Gio Reyna in the box. USMNT seems to be gaining momentum.

19th min.: And right on cue, both Pulisic and Reyna get on the ball near the Mexico box, but El Tri defenders block and clear the danger.

18th min.: We're almost 20 minutes in and Pulisic and Reyna haven't been much of a factor.

14th min.: Sloppy start by the USA. They've had another giveaway in their own end and Zack Steffen just kicked the ball straight out of play on a ball intended for Yedlin.

12th min.: Long ball by Mexico center back Hector Moreno for Chucky Lozano in the box and he almost got to the ball. He would've been in on goal. Mexican fans with the early "Ole" chants when Mexican players are knocking the ball around.

10th min.: Early yellow for John Brooks for a foul on Chucky Lozano from behind. He just ran him over. Referee looking to set the tone.

7th min.: The early goal by Mexico weirdly seems to have taken a bit of steam out of the game and the crowd. Both teams feeling each other out now.

4th min.: First shot for the USA. Josh Sargent from the right side of the box blasts the ball into Mexico GK Ochoa. Wasn't the cleanest of shots.

3rd min.: McKenzie, who has played well for the USA in recent matches, was way too casual with that pass and he was not expecting that kind of pressure from Mexico.

2nd min.: Goal! Tecatito Corona picks off Mark McKenzie's pass inside the box and he roofs the ball. 1-0 Mexico.

1st min.: And we're off! Stadium is rocking. This is gonna be a fun one.

9:17 p.m. ET: This three-man attacking front for Mexico is going to be tricky for John Brooks and Tim Ream to keep up with for pace: