Sporting News
Share on FacebookShare Share on TwitterTweet
The U.S. men's national soccer team is heading to the CONCACAF Nations League final after beating Honduras 1-0 on a last-minute goal by Jordan Siebatcheu. The Americans will face Mexico or Costa Rica in the final. 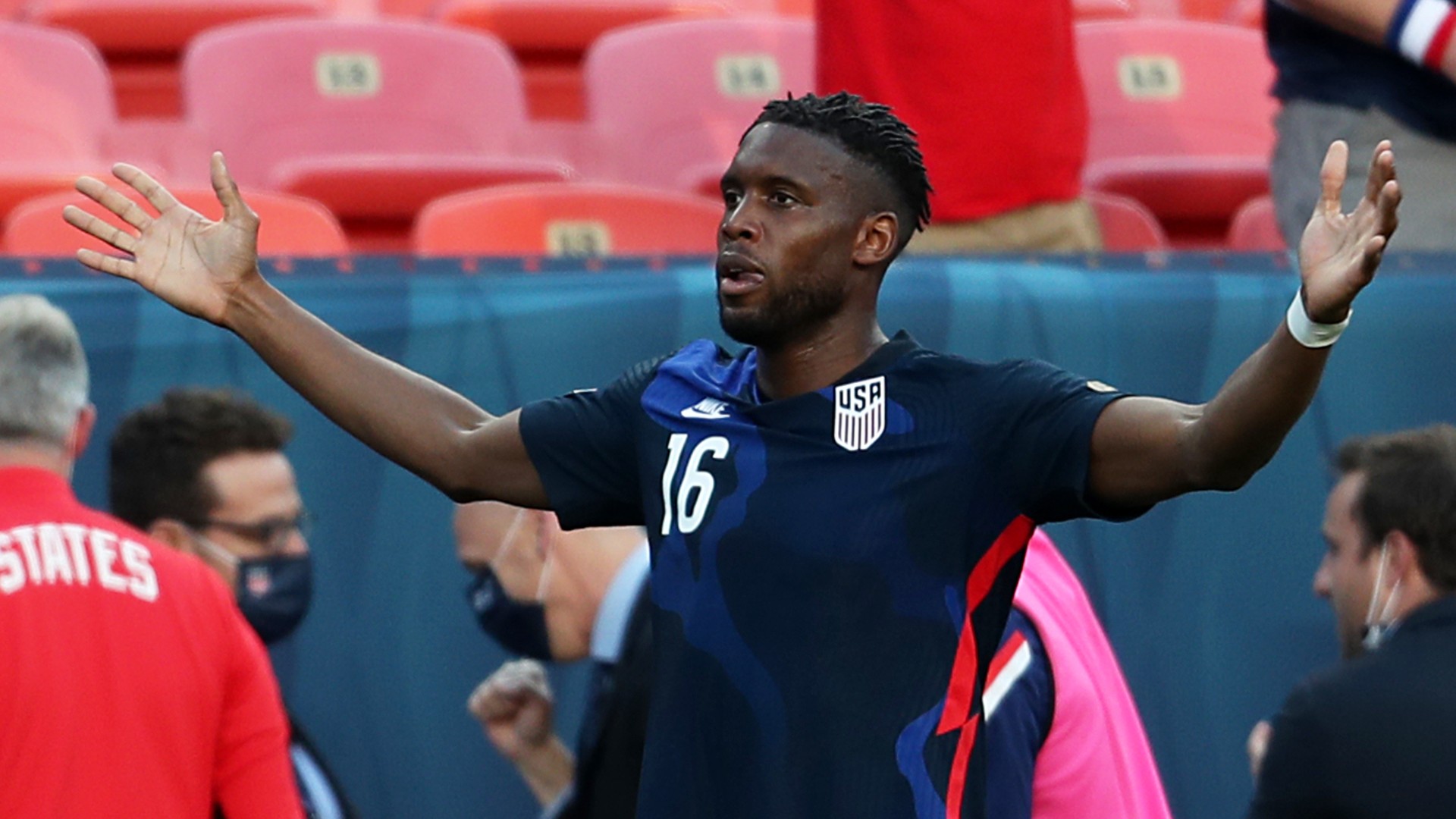 The U.S. national team left it late, but they're heading to the final of the inaugural CONCACAF Nations League. An 89th-minute Jordan Siebatcheu header gave the USMNT a 1-0 win over Honduras in a semifinal when the match seemed destined for a penalty-kick shootout in Denver. The USA will face Mexico or Costa Rica in the final on Sunday.

With the seconds ticking down, U.S. center back John Brooks lofted a ball into the box and Weston McKennie headed it down toward the center of the box, where Siebatcheu applied the diving header.

Both sides had their share of goal-scoring chances during the match, but Honduras looked closer to scoring as the minutes wore on. U.S. forward Josh Sargent cleared a ball off his own goal line and Honduras missed connecting on another chance right in front of goal. The best opportunities for the U.S. came from flashes by Gio Reyna and Christian Pulisic around the box.

Honduras made sure the match was played at their pace, delaying the game on restarts and injuries in the second half. And it became evident they were hoping to drag the match into a shootout. But their plan was foiled by Siebatcheu, who came off the bench to make the difference.

95th min.: The U.S. have done it. It wasn't easy, but the Americans found the breakthrough they needed. Honduras will likely regret playing for penalty kicks toward the end. The U.S. made them pay.

91st min.: What a chance for Honduras' Alberth Elis. He beats Brooks and his cross ricochets out of danger.

89th min.: With one minute left in regulation Jordan Siebatcheu scores! His first U.S. goal is going to get the Americans into the final. His diving header at the top of the six-yard box beats the 'keeper.

81st min.: The USA are just minutes away from heading to a penalty-kick shootout against Honduras. No extra time for the semis. Meanwhile, Kellyn Acosta comes in for Jackson Yueill.

79th min.: SUBS - Three for the USA. Siebatcheu, Cannon and Aaronson are in for Sargent, Robinson and Reyna respectively.

74th min.: Maybe the Honduras player, Rivas, wasn't kidding about needing the stretcher. He's been subbed out (Benavidez comes in) and Boniek Garcia also comes in as a sub for center back Pereira. Honduras are out of subs.

72nd min.: The stretcher comes out again. Another Honduras injury and more boos from the crowd. The gamesmanship by the Hondurans is clear for everyone to see. They've taken the air out of the game.

66th min.: Honduras with another dangerous chance, but this one is whistled dead for offside. This match is for the taking by either side.

64th min.: SUBS - And here they are. Edwin Rodriguez and Bryan Acosta in for Jonathan Rubio and Alex Lopez. And one minute later Ever Alvarado replaces Diego Rodriguez at left back.

62nd min.: After a long pause in the game for another Honduras injury, the match finally resumes. Subs coming for Honduras. They're forcing this game to be played at a pace they prefer.

59th min.: Sargent with a beautiful spin move and shot, but he's called for the foul. Great play in the box.

51st min.: What a chance for Honduras forward Lozano. He couldn't believe he beat the offside trap and Zack Steffen comes off his line to stop him. USA come away unscathed.

50th min.: Committed challenge from Honduras center back Maynor Figueroa who shuts down Pulisic in the box.

Halftime: Honduras arguably had the two best chances of the first half, but they couldn't convert. They've kept the game scoreless at halftime, which they would've signed up for before the match. Honduras have hurt the U.S. defense in transition, especially through Alberth Elis, and several fouls by U.S. defenders are playing right into the hands of the Catrachos. The best moments from the USA came from Gio Reyna and a couple of spurts from Christian Pulisic.

45th min.: We spoke too soon. Elis with a great move down the right for Honduras and his cross nearly finds Antony Lozano, who couldn't get a foot on the ball in front of net. It was a great chance for Honduras.

44th min.: Both sides not as sharp to end this half. No real opportunities on either end. The two teams look content to go into the half and regroup.

38th min.: Lletget nearly picks out McKennie for a header in the box, but Honduras GK Luis Lopez punches away.

33rd min.: Another foul by John Brooks near midfield and Honduras can kill time and work their way into the U.S. half.

30th min.: Two U.S. chances inside a minute! A Sargent header on the attacking end is saved by Honduras GK Luis Lopez. Then Lopez stuffs Pulisic from close range.

27th min.: Honduras comes close! On a set piece, Zack Steffen whiffs on the ball coming off his line and a Honduras header was cleared off the goal line by U.S. forward Josh Sargent! With the back of his head!

24th min.: Bit of a lull in the action. John Brooks slams into Alberth Elis from behind and the ex-Houston Dynamo forward stays down and needs treatment. He gets booed by the locals as he gets up off the ground.

17th min.: US 'keeper Zack Steffen clears the ball from his box just in the nick of time with Honduras forward Alberth Elis closing in.

13th min.: Another set piece. McKennie gets his head to a Sebastian Lletget corner, but he can't hit the target.

10th min.: Wow! Incredible slalom move by Gio Reyna through the Honduran defense but his diagonal shot is just wide. That play deserved a goal.

8th min.: Pretty even start to the match. Honduras right back Kevin Alvarez gets a header off a corner that finishes high and wide.

7th min.: Gio Reyna wins the ball back on the right side of the box and fires wide. Decisive play from Reyna.

5th min.: Honduras responds. Good spell in the USA's half for Los Catrachos.

3rd min.: USA are on the front foot to start the match.

6:25 p.m. ET: No surprises in the U.S. lineup. It's McKenzie-Brooks paired up in central defense and a midfield trio of Yueill-McKennie-Lletget. Sargent back up top.

The starting lineups are out. Christian Pulisic starts for the USA. Zack Steffen is captain:

How to watch USA vs. Honduras in USA

CBS Sports Network will carry the USA vs. Honduras match and it will be streamed on Paramount+ and fuboTV (7-day free trial) . The match will be available with Spanish-language commentary on Univision and TUDN.