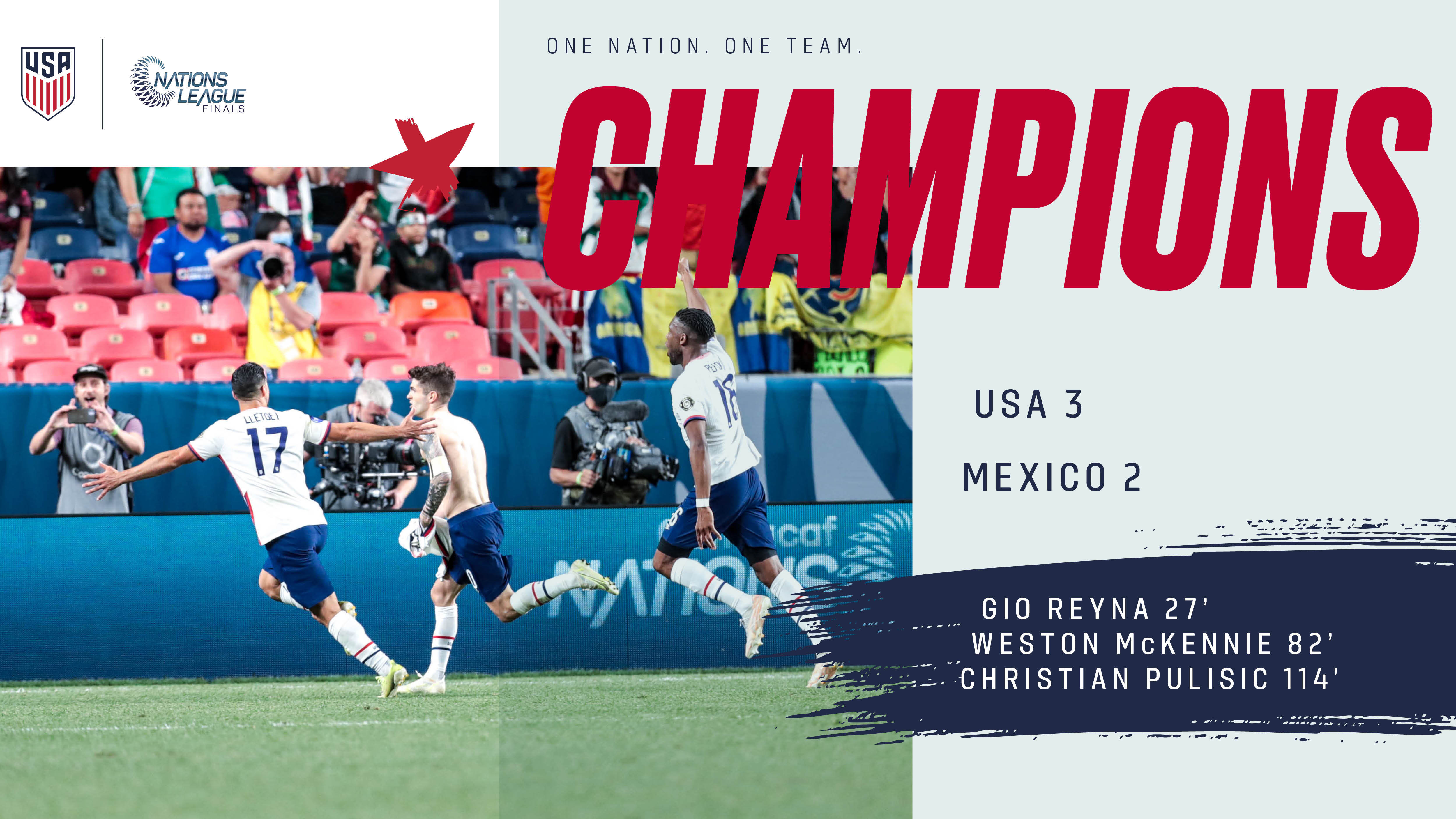 DENVER, Colo. (June 6, 2021) – The U.S. Men’s National Team is champion of the inaugural Concacaf Nations League after twice coming from behind to defeat rival Mexico 3-2 in amatch that required 30 minutes of overtime to determine a winner.

Gio Reyna and Weston McKennie each brought the USA back levelduring regulation, tying the game at 1-1 and then 2-2, before Christian Pulisic drew and converted the game-winning penalty kick in the second overtime period.The drama was far from over as substitute goalkeeper and Colorado native Ethan Horvath saved Andrés Guardado’s penalty kick deep into stoppage time of the second overtime period as the dramatic final played in front of 37,648 fans at Empower Field at Mile High.

The win marks the USA’s first trophy since the 2017 Concacaf Gold Cup and caps an incredible year for the USMNT which saw 10 players from this roster win titles with their respective clubs in Europe, including five league winners and perhaps the biggest club trophy of all as Pulisic’s Chelsea won the UEFA Champions League. The USA finished 5-1-0 in the Nations League, which commenced in 2019, was postponed due to the COVID-19 pandemic in 2020 and concluded this week in Denver.

In addition to making three changes from Thursday’s semifinal, U.S. head coach Gregg Berhalter started the match with a three-man backline and two wingbacks, deploying John Brooks, Mark McKenzie and Tim Ream in the back with Sergiño Dest pushing wide left and DeAndre Yedlin - starting his first USMNT game since 2019 - on the right.

Mexico struck the first body blow less than two minutes in when McKenzie’s pass out of the back was picked off and Jesus Corona blasted the ball over U.S. goalkeeper Zack Steffen and into the roof of net after barely a minute of action. Mexico kept its foot on the gas and nearly doubled the lead when Hector Moreno headed in a cross in the 24th minute, but the goal was correctly waved off after a check with the video referee.

Just minutes after benefiting from the VAR ruling, the U.S. pulled even when the 18-year-old Reyna blasted home a loose ball after a corner kick to become the second-youngest player in U.S. history to score against Mexico, just after Jozy Altidore and just ahead of Landon Donovan.

The U.S. continued to threaten on corner kicks in the second half, as Pulisic connected with McKennie and McKenzie for headers that were saved by Mexico goalkeeper Guillermo Ochoa.

The USA suffered a setback in the 67th minute when starting goalkeeper Zack Steffen was forced off the field with a knee injury and replaced by Horvath, setting the stage for some legendary heroics. Even though Horvath gave up the go-ahead goal, he made several huge saves even before his penalty kick stop, which will go down as one of the most memorable moments in the history of the USA-Mexico rivalry.

Mexico regained the lead with ten minutes left in regulation when 78th minute substitute Diego Lainez snuck a shot just inside the right post. Once again the USAput together a tremendous response, this time equalizing two-and-a-half minutes later on McKennie's powerful header off a Reyna corner kick.

Horvath made another huge save in the final moments of regulation off a blast from Hirving Lozano and the match went to overtime.

Mexico had the better of play in the first overtime period, but it was Pulisic who would prove the difference, earning a penalty kick when he was sandwiched by two Mexican defenders in the right side of the penalty area and went down in a heap. No foul was called initially, but a VAR review led to the penalty kick, which Pulisic struck with world-class skill and composure, firing the ball into the upper right corner in the 114th minute for what would be the game-winner.

The drama was far from over as Mexico got a VAR decision in its favor during the game’s dying moments when a Mexico header hit the arm of McKenzie. After a scuffle at the top of the penalty area between U.S. and Mexico players delayed the penalty kick for a bit, Horvath dove to his right to acrobatically push away Guardado’s attempt deep into stoppage time of the second overtime period. The USMNT then salted away another five minutes of stoppage time that was added to the original five additional minutes and the trophy was soon lifted by Pulisic amid confetti and fireworks.

Mexico head coach Gerardo “Tata” Martino was ejected at the end of the overtime for approaching and then touching the referee as he examined the screen to make a ruling on the handball that led to Mexico’s late penalty kick chance to tie things up.

The USA will next meet one of its most-frequent Concacaf foes when it hosts Costa Rica on June 9 at Rio Tinto Stadium in Sandy, Utah in the USMNT’s first friendly on home soil during a FIFA window since 2019. USA-Costa Rica, presented by Allstate, will be broadcast on ESPN2, UniMás and TUDN.

After the Costa Rica game, the USMNT will set its sights on July’s Concacaf Gold Cup in search of its seventh confederation championship.The USA was drawn into Group A with Canada, Martinique and a third team to be determined through pre-tournament qualifying. The Gold Cup will serve as a prelude to the 2022 FIFA World Cup qualifying, which will feature an eight-team final round to begin in September 2021.

MEX – JESUS CORONA, 2nd minute: Mexico jumped to an early lead just past the minute mark. Jesus Corona took the ball down the left flank but could not get by two USA defenders. The loose ball landed at the feet of center back Mark McKenzie, who tried to play it back wide, but Corona kept his run going and picked the ball off at the corner of the penalty box. He raced in alone at goalkeeper Zack Steffen and hit a hard, high shot to put Mexico ahead after 65 seconds. USA 0, MEX 1

USA – GIO REYNA, 27th minute: Minutes after VAR erased a goal by Mexico for being offside, the USA leveled off the foot of Gio Reyna. The play started with Christian Pulisic sending in a corner kick from the right side that Weston McKennie rose and headed off the far post. The ball bounced back to the center where Reyna was all alone and calmly put away a left-footed shot from inside the six past Mexico goalkeeper Guillermo Ochoa for his third international goal and first in a competitive match. USA 1, MEX 1

MEX – DIEGO LAINEZ (HIRVING LOZANO), 79th minute: Lainez put his side back up just seconds after coming on as a second-half substitute. The play developed on the left flank as the ball found Hirving Lozano in the center of the field. Lozano kept things moving to the right to Lainez, who cut to his left while inside the box and hit a low shot just inside the left post that went through McKenzie’s legs and skipped into the net just out of the reach of Ethan Horvath, who had replaced Zack Steffen ten minutes earlier. USA 1, MEX 2

USA – WESTON McKENNIE (GIO REYNA), 82nd minute: The USA wasted little time answering Mexico and the tying goal came off another corner kick. This time, Reyna took the corner from the left side and sent a looping pass to the post where McKennie again rose high and headed it down. The ball got past Ochoa, who got a hand on it but could not turn it outside the post. USA 2, MEX 2

USA – CHRISTIAN PULISIC (PENALTY KICK), 110th minute: Wearing the captain’s armband, Pulisic was knocked down in the right side of the penalty area during a penetrating dribble. After a VAR check in favor of the USA, he took a short run to the ball and drilled his shot to the upper right corner for the game-winner. USA 3, MEX 2

USA – ZACK STEFFEN, 43rd minute: Steffen came up huge to keep the match even heading into the break. With the U.S. defense pushed high, Mexico’s Edson Alvarez chipped a ball from midfield over the top to spring Lozano alone towards goal. Steffen came off his line and made himself big, deflecting Lozano’s shot wide from the top of the penalty box.

MEX – GUILLERMO OCHOA, 70th minute: The USMNT threatened on corners all night and Ochoa twice made key saves off those set plays. Pulisic was on point with his cross from the right in the 70th minute and McKenniejumped between two defenders to put a solid header on goal, forcing the Mexico goalkeeper to dive to his left to keep the ball out.

USA – ETHAN HORVATH, 90th minute: Having replaced the injured Zack Steffen earlier in the half, Horvath made a huge save in the waningmoments of regulation. Lozano ripped a curling shot from the top of the penalty area that headed to the right upper corner, but Horvath reacted quickly, diving to his left to push the ball wide with his outstretched right hand.

USA – ETHAN HORVATH, 124th minute: If the game didn’t have enough storylines, local product Horvath added another. After a VAR ruling determinedthat the ball had deflected off McKenzie’s arm, Mexico’s Andres Guardardo stepped up to the spot and hit a solid left-footed penalty kick low and to the left side, but it was too close to Horvath,who dove to his right to push the ball away and preserve the win.