The Umbrella Academy Recap: State of the Reunion

Vulture
Share on FacebookShare Share on TwitterTweet
At long last, the Umbrella Academy is ready to reassemble. 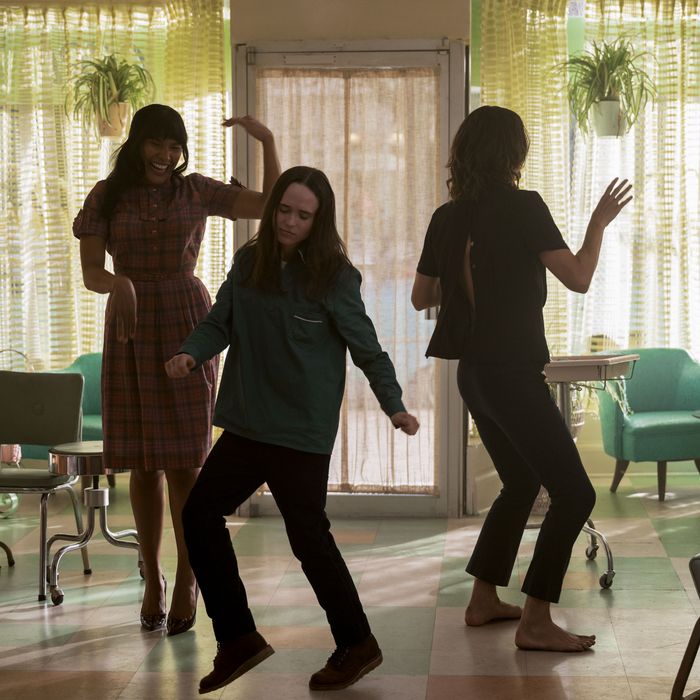 After being scattered around over a number of years — and with one amnesiac in the mix, to boot — it was always going to take some work to get all the Hargreeves children back in the same room. But with the apocalypse looming, there’s not a ton of time left for solo adventures.

So finally, near the start of this episode, Five calls for a full-blown a family meeting. Yes: At long last, the Umbrella Academy is ready to reassemble. (Even poor ghostly Ben, who no one but Klaus can see.) And while the reunion is shot in a way that makes it hard to tell if all of these actors were ever actually on the set at the same time, it is fun to see the old family dynamics come back into play when all seven Hargreeves children can bounce off each other.

Diego demands an apology from Vanya for something she doesn’t even remember. Five and Diego argue over whether they should just find Reginald, or find and kill him before he shoots John F. Kennedy. Luther raises the disturbing possibility that, as in season one, the family’s efforts to stop the apocalypse will actually end up being the thing that causes it. In the end, everybody leaves without much resolved, because come on, there’s still a whole half of a season left.

But the relative lightness of this family meeting, and the rest of the episode, is a reminder that Umbrella Academy is ultimately a pretty fizzy show up about the end of the world. For a series this obsessed with the apocalypse, the stakes of Umbrella Academy can feel perilously low. We’re routinely reminded that the end of the world is coming — six days and counting, y’all! — and at the meeting, Five specifically tells everyone that he saw literally all of them die before Hazel zapped him back in time. And what do Allison, Klaus, and Vanya decide to do with that terrifying knowledge? Spend a whole day getting drunk and goofing around in a beauty parlor. (Okay, fine, that’s exactly what Klaus would do, but the other two seem like a whole different story.)

But while the gang (with the exceptions of Five and Diego) are mostly treating the end of the world with an indifferent shrug, the show is also ratcheting up the personal stakes in some intriguing ways. After the meeting, when Vanya returns to Sissy and suggests they run away together, Sissy firmly refuses to leave her comfortably unhappy marriage to Carl, leaving Vanya heartbroken once again. This is the danger of a time travel romance. In addition to the standard-issue fears of remaking your entire life, Sissy is constrained by the social mores of the early 1960s, which would make it enormously challenging for two women to embark on a romantic relationship, or raise a child together.

Meanwhile, just when it looks like the trail might be going cold, the rest of the family catches a lucky break. Reginald Hargreeves — who might finally be ready to accept that all these weirdos who say they’re his time-traveling children may, in fact, be his time-traveling children — sends a limo with a cordial invitation for a dinner party at his place. Next time, it seems, the family reunion will include dear old dad as well.

But that’s a story for another episode. In the meantime, despite the episode’s long-awaited reformation of the Umbrella Academy, it’s Lila and The Handler who actually end up moving the plot forward. In an elaborate frame-up, Lila and The Handler make the Swedish assassins think they’re tracking Diego, and lure them into a trap. Once there, they successfully blow up one of the assassins, leaving only a bloody foot behind. One down, two to go.

I have not been a huge fan of the Swedish assassins, who have struck me as both cliche and weird for weirdness’ sake since they were introduced in the season 2 premiere. But whatever their faults, it’s worth it for the Viking funeral that closes this episode. As the Swedes put the severed foot on a boat and light it aflame with an arrow, one brother lets out a wounded howl. As ridiculous as this show’s side characters can be, it’s always nice when Umbrella Academy takes a moment to remind us that they’re also human.

• It feels like there’s still more story to be told about the source of Hargreeves’ deep and paternal affection for Pogo, which has so much more warmth than he ever showed his adopted children. Then again, Umbrella Academy has sort of implied that Hargreeves’ cruelty to the children was a part of his warped idea for what it would take to turn them into superheroes.

• It’s been a complaint of mine since the very beginning, so I’m glad Umbrella Academy has finally at least acknowledged the squickiness of Luther and Allison’s love story, given that they were raised as siblings. Vanya: “Aren’t we all brothers and sisters?” Allison: “Technically.” Klaus: “If you have to use the word ‘technically,’ we’re already in trouble.”

• Klaus, Vanya, and Allison’s Breakfast Club-esquedance number to “Twistin’ the Night Away” is cute, but it also feels a little like the show is trying to reverse-engineer the semi-viral “I Think We’re Alone Now” sequence from season one.

• At the end of the episode, Allison finally decides to tell Ray that she’s a superhero. Honestly: Not sure what the holdup was here!

• Hargreeves sends Pogo to bed with a reading of Homer’s Odyssey. (Specifically, the opening lines from Robert Fitzgerald’s well-regarded 1961 translation.)

• I’ll admit: I did laugh at the decision to set the Swede’s Viking funeral to a Swedish-language cover of Adele’s “Hello.” If you want to hear the whole thing, I’m pretty sure this is the cover the show used.

• Luther’s unusually large diet is one of Umbrella Academy’s most reliable sight gags, but come on, how many eggs was he scrambling in that pan?

• “Everyone changes the world. And it’s scary, but that’’s kind of the deal.” — Diego, summing up one of Umbrella Academy’s central ethos.

VULTURE NEWSLETTER
Keep up with all the drama of your favorite shows!
Terms & Privacy Notice By submitting your email, you agree to our Terms and Privacy Notice and to receive email correspondence from us.
Similar shots
Topics of the week
Beirut Explosion Today Beirut Lebanon Earthquake in N.C Earthquake. In NC College football Chicago PGA Championship Baltimore explosion Hurricane Isaias
Hot topics