CNN
Share on FacebookShare Share on TwitterTweet
Former President Donald Trump will be fined thousands of dollars beginning Tuesday for failing to comply with a subpoena from the New York attorney general, a state judge ruled.
In a three-page written order, Judge Arthur Engoron formalized the reasoning behind his decision made Monday in open court when he held Trump in contempt and said he would fine him $10,000 per day.
In the written order Tuesday, the judge wrote that Trump "willfully disobeyed" his prior order to comply with the subpoena for documents.
"Thus, Donald J. Trump is in contempt of Court and must pay a fine of $10,000 per day, from the date of this Decision and Order, until he purges such contempt to the satisfaction of this Court," the judge wrote. The order is signed and dated April 26. 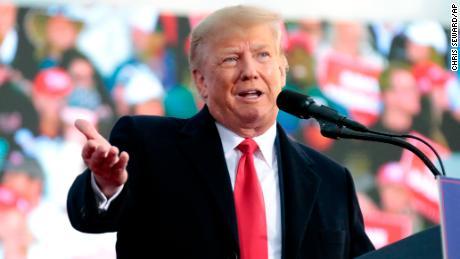 Engoron also found that the New York attorney general's civil investigation is harmed by Trump's failure to comply.
"Moreover, each day that passes without compliance further prejudices OAG, as the statutes of limitations continue to run and may result in OAG being unable to pursue certain causes of action that it otherwise would," Engoron added.
Trump's attorney has said she may appeal the ruling.
The attorney general's office asked the judge to hold Trump in contempt for failing to comply with the December subpoena. Trump's attorney, Alina Habba, said that they had searched and found no documents to provide investigators other than the 10 previously turned over by the Trump Organization.
The judge said the lawyer provided a "boilerplate" response in a sworn affidavit and failed to address whether Trump's team had searched file cabinets, calendars and other records.
"In short, the affidavit provided the Court with no basis to find that the search had been a thorough one or that it had been conducted in a good faith effort to provide these necessary records to plaintiff. Not only did Mr. Trump fail to submit an affidavit himself, which this Court believes would have been the best practice, as he is the most obvious person to affirm where any responsive documents in his possession, custody, and control would be located, but the attorney affirmation submitted on behalf of Mr. Trump contained only conclusory statements, rather than details of a diligent search," the judge wrote.
Similar shots
Topics of the week
How Do i register to vote Hurricane Ian tracker Steelers Cowboys Hurricane tracker Ned Fulmer Florida hurricane Packers Chiefs Buffalo Bills used cars
Hot topics