PC Gamer
Share on FacebookShare Share on TwitterTweet
With this bug, the 3D action game loses an entire dimension. 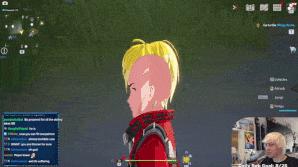 Tower of Fantasy, the new free-to-play MMO-like action game, has had a turbulent launch. Hordes of players slammed into its servers (opens in new tab) and were met with queues and errors preventing them from getting into the game. And now that more of them are squeezing in, they've found that the game wasn't fully prepared for them.

now this is what i call tower of fantasy GAMING pic.twitter.com/wNixSAeO0IAugust 11, 2022

The glitch has squished SivHD's 3D anime character into a 2D character. The juxtaposition as he circles the camera around his flat character standing in the 3D valley is extremely Paper Mario. At one point, the streamer angles the camera so that the character is only a thin vertical line. If that wasn't upsetting enough, just wait until they start running.

It's not totally clear how this glitch operates. SivHD figured out that if they sit their character in a turret and exit quickly enough, they get squished. Repeat that several times and your character becomes thinner than a crêpe. My guess is that it's some form of animation bug for when the character leaps into the seat. Something about the way the model stretches to sell the quick movement, like how animations are full of smear frames (opens in new tab), might be the culprit. It's as if, for a brief moment, your character becomes a 2D model and then incorrectly retains some of that 2D nature once it's over. Whatever the reason, the glitch is extremely amusing to watch.

Some time after their discovery, SivHD got asked if the glitch was important to progress in the game by someone in chat.

"It is important, because now, when I approach the enemy, they don't see me coming," SivHD responded, deadpan, while scooting his papercraft protagonist near a camp of unaware enemies. "See that archer? He doesn't see me."

Developer Hotta Studio addressed the game's rough state in a post on the site, saying that it was "well aware that Tower of Fantasy still has many shortcomings." It promised to tackle the worst bugs as they happen and compensate players with in-game currency—which it has already started to do for its initial server instability.

The growing list of bugs is a little surprising for a game that was released in China last year and had a beta earlier this year. But Tower of Fantasy's massive scale and shared world experience combined with the force of a thousand eager players probably makes bug stomping a monumental task. If it were me though, I'd keep the 2D one. Every anime game should let you turn 2D whenever you want.