KHOU.com
Share on FacebookShare Share on TwitterTweet
The threat for severe weather across Southeast Texas is expected to continue tonight into tomorrow morning with the possibility of tornadoes, hail and flash floods. 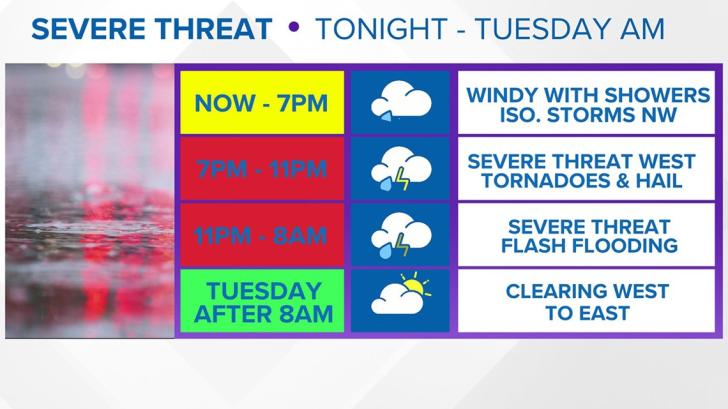 The threat for severe weather across Southeast Texas is expected to continue tonight into tomorrow morning with the possibility of tornadoes, hail and flash floods.

HOUSTON — The threat for severe weather across Southeast Texas will continue Monday night into Tuesday morning. It's bringing the possibility of tornadoes, hail and flash flooding.

A tornado watch has been issued until 10 p.m. for Austin, Brazos, Burleson, Colorado, Grimes, Madison, and Washington counties.

Most computer models show the front slowing down, so the timing has shifted to later Monday night into Tuesday morning.

The flash flooding threat ramps up in the early morning hours on Tuesday and into the morning rush hour.

"I think some of the bayous may react and spill, at least partially as we head into the overnight," KHOU 11 Chief Meteorologist David Paul said.

RELATED: Severe Weather Awareness: Tips on how to respond to Houston's weather hazards

RELATED: Download the KHOU 11 app to get severe weather alerts

LIVE RADAR: Track the storms as they roll into SE Texas

As the front moves through, hail, damaging winds upwards of 60 mph, isolated tornadoes and heavy downpours are capable of producing flash flooding.

Paul said early models predict 2 to 4 inches of rain for many areas, but that could quickly go up to 5 or 6 inches.

Here’s a look at the timing of the storms

Monday 8 p.m.: Isolated to scattered showers and thunderstorms, heavy downpours, gusty winds. The cold front and dry line at this time are still located well to the west of our area.

Monday 11 p.m.: Storms are becoming a bit stronger, the severe threat is increasing during this time with damaging winds, large hail, flooding downpours and isolated tornadoes becoming more prominent as an advancing dryline acts to instigate the atmosphere and produce a more defined line of strong storms.

Monday 12 a.m.: Round 2 of the thunderstorms roll through around midnight through the early morning rush hour Tuesday across the Greater Houston area.

"We could see the biggest flooding threat as the torrential rain just sits over the same areas for an extended period of time. And that's going to put down 3, 4, 5 inches of rain in just a few hours," warned KHOU 11 Meteorologist Pat Cavlin.

Tuesday 5 a.m.: The dryline thunderstorms diminish but the cold front fires off a more defined squall line moving into our western cities and counties in the very early morning hours of Tuesday. The flash flooding threat is significantly increased as the line is slow to move and will deliver 2 to 3 inches per hour rainfall rates. Overnight tornado, damaging wind and large hail threats continue to be high.

Tuesday 8 a.m.: The cold front is pushing through the Houston metro in the middle of the morning commute Tuesday. Blinding, flooding downpours with flash flooding likely with this slow-moving squall line. Embedded tornadoes, damaging straight line winds and large hail is also possible.

Tuesday 10 a.m.: The passing of the cold front won't happen until later tomorrow morning.  The majority of the severe storms have now pushed east of I-45 and improving conditions begin to work into our area. Most areas are out of the woods in terms of a severe threat at this time.

Stay close to the forecast and the weather team at KHOU 11 News for the latest changes and up-to-date information. With the threat coming in overnight, it is even more important to exercise your storm plan now and be ready at a moment's notice to seek a safe place if a tornado warning is issued for your area or flash flooding breaks out. Download the KHOU 11 News app to receive all alerts immediately to your phone.

Click here to track the rain using our live radar.

KHOU 11 APP: Get our mobile weather alerts delivered to your device