Texas Public Radio
Share on FacebookShare Share on TwitterTweet
The National Weather Service has increased the risk of violent weather for the San Antonio area to include a tornado watch until 10 p.m. Monday, but the worst risk remains between New Braunfels and Austin. 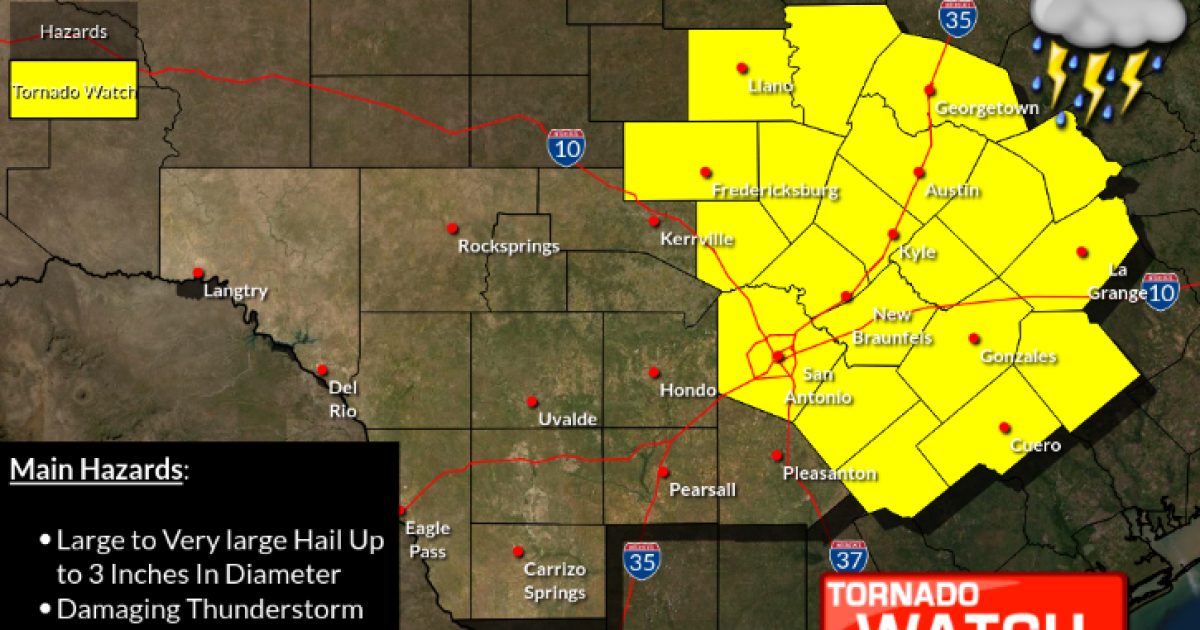 The National Weather Service has increased the risk of violent weather for the San Antonio area to include a tornado watch until 10 p.m. Monday, but the worst risk remains between New Braunfels and Austin.

Forecasters said chances for tornadoes and hail up to 3 inches in diameter remain highest in the I-35 corridor closer to Austin. Still, San Antonians, especially those that live on the East Side, need to keep a close eye on the weather through Monday night.

Wind gusts of 25 to 30 mph are possible through the evening, but the best chances for rain or thunderstorms diminish in San Antonio in the late afternoon or early evening on Monday.

550pm Radar Update: There are several Tornado Warnings in effect. SEEK SHELTER NOW IF YOU ARE IN THE PATHS OF THESE STORMS! pic.twitter.com/cK49ljRV4q

“We do have the potential for tornadoes today, and tonight, we’ll also have a hail and damaging wind threat as well, especially as we get later into the evening and the early morning hours," explained Kent Prochazka, a meteorologist with the National Weather Service in Houston.

The Houston area faced a flood watch starting at 7 p.m.

Tuesday and Wednesday in San Antonio will still be windy but the sky will be sunny to mostly sunny with highs in the 70s. Temperatures will be higher Thursday through Sunday.

A fire weather watch remains in effect from Tuesday afternoon due to fire prone conditions west of line from Rocksprings to Pearsall.

The National Weather Service reports any wildfires may spread rapidly and unpredictably.

Preventions starts with no outdoor burning and limiting activities that could produce a spark.