Vulture
Share on FacebookShare Share on TwitterTweet
Set in a worn-down Chicago restaurant, The Bear tells the story of superstar chef Carmen Berzatto, who’s come home to take over the family business. 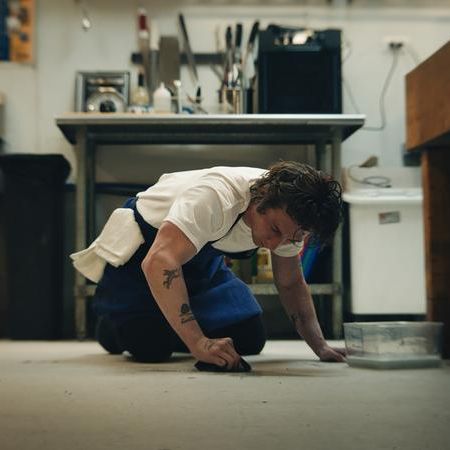 In the run-up to The Bear — Jeremy Allen White’s new FX series about a star chef struggling to revamp his family’s Italian beef spot in Chicago — many TV critics have been wondering why there aren’t more shows about restaurants. It’s a good question, considering how many shows have been made about offices, radio stations, schools, stores, and whatever else. Restaurants invite intrigue and drama — people work long hours, they date (generally ill-advisedly), and businesses can go bust in the wake of one bad review. And yet TV has never really gotten the restaurant show right.

I would argue that it’s not just that Hollywood has never gotten the show right, but that it’s never gotten the actual industry right. Kitchens are sweaty, stinky places full of odd characters, singular passions, and semi-greasy floors. To do a restaurant show right, you have to actually feel that intensity — to know that there are unspoken rules and roles and that the very best chefs are not just very talented but also very driven. TV shows set in restaurants tend to try and cast hot, young people, all too clean, too quirky. Restaurant lifers can be weirdos. The people who deliver meat or work flattop grills all day just because they love it are capital-c Characters, but you have to learn to love them.

Straight out of the gate with episode one, it’s clear that The Bear gets all of that. Set in a worn-down Chicago beef restaurant cleverly named The Original Beef Of Chicagoland, The Bear tells the story of a greasy-haired superstar chef, Carmen “Carmy” Berzatto (White), who’s come home to take over the family business after his older brother passed away. (We don’t know how yet, but it doesn’t look good.) He’s worked at Noma in Denmark and nabbed a James Beard Award for Rising Star Chef, but in the eyes of his asshole cousin/restaurant manager Richie (Ebon Moss-Bachrach), he’s just a little shit who’s running the business into the ground. Did we mention that Richie is an asshole? Because Richie is an asshole.

On the day we step into The Bear, Ayo Edebiri’s Sydney has just started staging, which basically amounts to an unpaid internship. She’s Culinary Institute of America-trained and has worked at Chicago hotspots Alinea, Avec, and (weirdly, if you know the city) Smoque, but she admires Carmy, who she says was “the CDC (chef de cuisine) at the most excellent restaurant in America.” She always admired The Original Beef, which she says was her dad’s favorite restaurant.

There are other people on staff at the Original Beef, including Lionel Boyce’s Marcus the baker, Liza Colón-Zayas’s line cook Tina, and real-life chef Matty “Munchies” Matheson, who plays a fix-it man that seemingly gets paid in sandwiches. Abby Elliott makes a brief appearance as Carmy’s sister Natalie, a.k.a. Sugar, and the show’s creator and showrunner is Chris Storer, who’s best known for directing another very good TV series, Ramy.

Episode one, “System,” is really just about establishing the vibe and drama of The Bear, and it does a good job. You leave its tight 27 minutes with more questions than you entered with, and you want to stick around to find out the answers. What happened to Carmy’s brother, and will The Original Beef survive? What bug has taken up residence in Richie’s ass, and does Sydney have what it takes to survive the gritty, dirty reality of life in a Chicago neighborhood spot? All will hopefully be revealed shortly, especially since FX is dropping the entire first season at once.

There are minor quibbles to be had, especially if you know anything about Chicago restaurant culture. Having spent over a decade in the city personally, I’ll say that I’m of the firm belief that if word got out that a James Beard Award–winning chef was running an Italian Beef stand that the restaurant would have no problem paying bills, even if he was just whipping out what he considered to be sub-par spaghetti.

Some critics have decried the fact that only Richie seems to be doing “a Chicago accent,” but I’ll say that I didn’t find that to be much of a problem, especially considering that the vast majority of Chicago’s residents don’t actually speak with the “Da Bears” type affect that outsiders have come to associate with the city. Some Chicagoans certainly do talk like Richie, but others turn phrases like Tina or Marcus, and I love that the show represents the diversity of that dialect.

I could say that I don’t love that Richie shot a gun straight into the air before he berated a bunch of nerds who were just there to play an obscure video game, Ballbreaker, but honestly, living in Chicago, I heard more than a few guns shot straight up into the air after big sports wins and on holidays, so, really, it all checks out.

If “System” is any indication of where The Bear is going, it’s going to be a fast, gritty, and thrilling ride, and I can’t wait to see what happens. Let’s all just grab our favorite Italian beef — be it wet, dipped, or dry — grab a seat at the counter, and enjoy the ride.

• I’m thrilled to be recapping The Bear for Vulture not just because I lived in Chicago for so long but because I actually grew up in a restaurant household, with a mom who wrote about food, a dad who was a former waiter, and grandparents who owned a steakhouse for half a century. I love restaurants and I love TV, and hopefully The Bear will be the perfect marriage of the two.

• One more minor asshole-ish quibble: It is actually possible to make a TV show in Chicago and not use a Wilco song in the pilot, but you wouldn’t know that from The Bear. Still, I can’t be mad at a well-placed “Via Chicago,” because who could?

VULTURE NEWSLETTER
Keep up with all the drama of your favorite shows!
Vox Media, LLC Terms and Privacy Notice