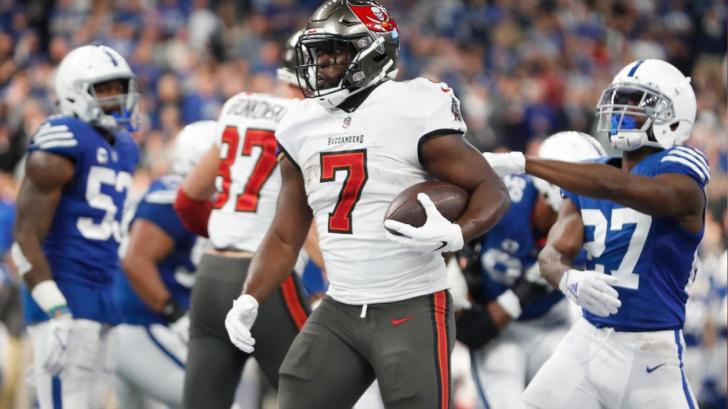 If you thought this would be a game dominated by offense, you forgot NFL defenses get paid too, and that's truly what defined the day when the Tampa Bay Buccaneers handed the Indianapolis Colts a 38-31 loss at Lucas Oil Stadium in Week 12. The ship was righted by Tom Brady and Co. after they stopped a two-game slide in Week 11, but they ran up against the Indianapolis Colts -- a team riding high on a three-game win streak that most recently includes a full-on dismantling of the Buffalo Bills -- pushing the Bucs to the absolute limit.

And, in turn, the Bucs did the same to a Colts team that was looking to make another statement against another contender, and nearly did. A shutout through the first quarter, this game became the polar opposite over the remaining three sessions, and every time one team thought they'd finally delivered the KO, the other would stand up and just narrowly beat the 10-count before settling back in and fighting on.

It's a fight the Buccaneers won, and earned, but speaking of earning something -- pay respect to the Colts.

Why the Bucs won

On a day that saw the Bucs struggle out of the gate, they decided it wasn't about winning this one in style, it was simply about winning however they could -- gritty and missing a tooth. The Bucs drew blood on a 1-yard touchdown run by running back Leonard Fournette on a scoring drive that took only eight plays. Not to be outdone, Carson Wentz delivered an explosive reply when dropped a dime in a bucket on a 62-yard touchdown pass to wideout Ashton Dulin on the very next drive, but Tampa Bay didn't pout about it, because they've seen it all before.

Even after an attempt to regain momentum by Brady on a deep throw to Scotty Miller was met with an interception by Isaiah Rodgers, followed by another strike from Wentz -- this time a 15-yard touchdown to tight end Jack Doyle -- the Bucs didn't blink. Brady's defensive counterparts needed to step back up and help, whether they had all of their teeth or not, because Wentz found T.Y. Hilton for yet another Colts touchdown just ahead of halftime.

Their order of defensive dominance arrived promptly at the hands of All-Pro pass-rusher Shaq Barrett, whose sack-fumble-recovery combined with an interception by Antoine Winfield to wildly shift momentum in favor of the Buccaneers. And while the defense was back in the swing of things, so was the offense, the two units combining to apply a ton of pressure to a Colts team that refused to go quietly into the night. Blow after blow after blow, each side pummeled the other with a slew of impact plays that took this game to the wire, ending with a final haymaker from Fournette and a interception by Pierre Desir to help Tampa Bay escape a fight it never saw coming.

Why the Colts lost

There was no fear in the Colts entering this matchup, and that truth was made evident in the first quarter when they held Brady and Co. to no points and no third-down conversions, forcing and recovering a fumble as well. Unfortunately for the Colts, however, was the fact the Bucs' defense was hell-bent on matching serve -- also holding the Colts to no third-down conversions in the first quarter along with no touchdowns, and also forcing and recovering a fumble of their own. Neither offense could get going, but then the second quarter came and it brought a barrel of fireworks with it.

Brady led his team to the first TD of the game to open the second quarter, thanks to Fournette, and that would foreshadow what was to come for the Colts. They had no answer whatsoever for Fournette, nor did they have one for Rob Gronkowski, the latter finishing his day with 123 receiving yards on seven catches. Time and again, the Colts' defense mounted up and made key plays, but it wasn't enough, and two separate defensive pass interference penalties that led to a combined 14 points took the Colts from flowing downstream to constantly swimming upriver.

By the time Nyheim Hines muffed a punt that was recovered by the Bucs, it felt as if the wheels were slowly loosening on an otherwise impressive outing by the Colts, and nearly did, but credit them for continuing to find ways to fight back and tie the game in the waning minutes of regulation. Even after Fournette scored his fourth TD of the day, the Colts used a dynamic kick return by Isaiah Rodgers to nearly force overtime, but they simply took one too many punches from the defending champs.

There were plenty of highlights to be seen in this game, but when it comes to which was the turning point, there can only be one. That award goes to Barrett, whose sack-fumble-recovery in the third quarter arrived with the Colts standing with first down on the Bucs 20-yard line and threatening to make it a 17-point game. Instead, Barrett's takeaway led to a touchdown that shrank the Bucs deficit to only three points -- likely saving the day for Tampa Bay.

Play of the game

Only a week after seeing Jonathan Taylor rack up five TDs at Lucas Oil Stadium, Fournette walked away with four of his own, and none were bigger than this home run swing.

"Sorry [to] my fantasy football owners, [but] we have superstars all over our team with ONE ball on the field, so y'all get the rest." -- Fournette following the game, via Twitter

The Buccaneers will mount up to try and sweep the Atlanta Falcons in Week 13 at Mercedes-Benz Stadium, while the Colts travel to face the Houston Texans at NRG Stadium.