Buccaneers.com
Share on FacebookShare Share on TwitterTweet
The Buccaneers' win on Monday night capped a helpful weekend in which several NFC contenders lost and the overall conference standings improved for Tampa Bay 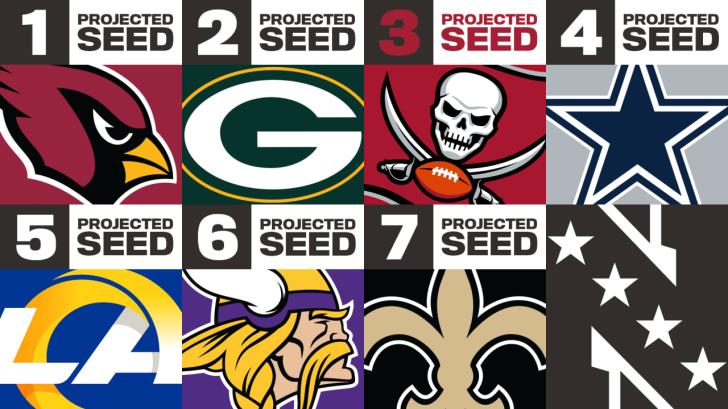 For the third week in a row, the Tampa Bay Buccaneers and Dallas Cowboys have swapped spots in the overall NFC standings, with the Buccaneers reclaiming the third seed after their Monday Night Football win over the New York Giants. The Bucs and 'Boys have identical 7-3 records but the Bucs get priority in the standings thanks to their Week One win over Dallas.

The top two seeds in the NFC have switched back again, too. On a Sunday that saw a number of contenders lose, the Cardinals kept the Seahawks at bay and climbed back into first in the NFC. If the playoffs started today, Arizona would get the only first-round bye, while the Buccaneers would start with a home game against the middle of the three Wild Card teams.

Here's how the NFC playoff race stands after 11 weeks:

Both Arizona and Green Bay had road games against divisional foes in Week 11 but the Cardinals drew the free-falling Seahawks while the Packers had to battle it out with an ascending Vikings squad. Even without Kyler Murray and DeAndre Hopkins, the Cardinals handled Seattle fairly easily, 23-13, and moved to 9-2, the best record in the NFC. Arizona needs that lead over Green Bay to remain in the top spot because the Packers gave the Cards one of their two losses in Week Eight and will carry that head-to-head tiebreaker like a cudgel to the end of the regular season. The Cardinals are guaranteed to remain in the top spot for at least one more week because they are about to enjoy their bye and even a Green Bay win in Week 12 would still leave them with a half-game lead. Three of Arizona's six games after the bye will be against Chicago (3-7), Detroit (0-9-1) and Seattle (3-7).

Aaron Rodgers (385 yards and four touchdowns) and Davante Adams (115 yards and two touchdowns) put on typical superstar performances at Minnesota on Sunday but were outdueled in the end by Kirk Cousins (341 yards and three touchdowns) and Justin Jefferson (169 yards and two touchdowns) in a 34-31 shootout. It was a huge win for Minnesota, as discussed in more detail below, but it didn't put the Packers in any immediate danger of losing the NFC North lead. That margin is still 2.5 games and Green Bay gets a rematch with Minnesota at Lambeau Field in Week 17. Next up, however, is the L.A. Rams' visit to Green Bay in Week 12. The Rams, perhaps the hottest contender in the conference in October, will be trying to get back on track as they come off their bye after consecutive losses to Tennessee and San Francisco. Green Bay's own bye follows that game, and their schedule after the break includes games agianst Chicago and Detroit.

After watching a Sunday slate go largely their way – losses by Green Bay, Dallas, New Orleans and Carolina certainly helped – the Buccaneers took care of their own business on Monday night with a 30-10 win over the Giants. That stopped a two-game losing streak and allowed the Bucs to catch the Cowboys in the standings again. It also increased their cushion in the NFC South standings to two games over New Orleans and 2.5 over Carolina. The Buccaneers still have two games left with the Panthers and one with the Saints, and that makes up three of their last four games of the season. Tampa Bay's win on Monday night was also important in that it came against an NFC team, improving its conference record to 5-3. If the Buccaneers end up in a tie for seeding with a team other than Dallas, conference record could end up being the tiebreaker and at the moment Tampa Bay's three losses to NFC teams are the most among the top six seeds. If the standings were to stay the way they are after Week 11, the Buccaneers would open the playoffs with a home game against the Vikings.

The anticipated Cowboys-Chiefs late-afternoon shootout turned into a defensive struggle and the Chiefs held Dak Prescott and company without a touchdown in a 19-9. It was a sharp turnaround from the 43 points the Cowboys had hung on the Falcons the week before but it's hardly an insult to lose to the Chiefs, who have won four in a row and are starting to look like the team that has won the last two AFC titles. Dallas started the game without Amari Cooper and lost CeeDee Lamb to a concussion before halftime, so Prescott's options were quite a bit more limited than usual. Like the Packers, though, the Cowboys still have a frim grip on their division lead, with a 2.5-game lead on the Eagles. Only one of the Cowboys final seven games features an opponent with a winning record (Arizona in Week 17), but most of those remaining opponents are hovering around .500 and are very much in the playoff race. That includes the likes of the Raiders, Saints and Eagles.

Nothing much changed for the Rams during their bye week, though they did see the Cardinals increase their division lead to a full game. Los Angeles went into and came out of the break with the top Wild Card spot and they remain a level above the seven teams with records between 5-5 and 4-6 in the NFC. As noted earlier, the Rams will be returning to action in Green Bay in what could prove to be a game of great significance if Los Angeles can eventually overtake the Cardinals in the NFC West. Arizona won the first of their two meetings in what was the Rams' only loss before their current two-game slide but the Rams will have a chance to even up the season series in Week 14. Sandwiched between those two critical games against contenders is a home date with the 2-8 Jaguars.

The Vikings were the big winners in Week 11, not only beating their most heated rival in dramatic fashion but also climbing up a rung from the conference's muddled middle. The Vikings are hardly free of the pack, only one game better than the 12th-seeded Falcons, but they have beaten the Chargers and Packers in a row and are no longer on the outside looking in. Minnesota gets the sixth seed ahead of New Orleans because it has a superior record in conference games, 4-2 versus 4-4 for both the Saints and 49ers. The Vikings' conference record, in fact, is better than any of the teams behind them except Washington, which is also 4-2 against NFC teams after consecutive wins against Tampa Bay and Carolina. The Vikings won't play the Saints in the regular season but their next game is against another team on the rise, the 49ers, and it's in San Francisco. Minnesota also plays the Rams in Week 16 before a Week 17 trip to Lambeau.

New Orleans lost its third straight game since their Week Eight win over the Buccaneers, this time a 40-29 decision in Philadelphia. That dropped the Saints to .500 and into a three-way tie for two spots with the Vikings and 49ers. As noted above, the Vikings win that three-way tiebreaker due to its conference record, sending the Saints and 49ers into a two-way tie for the third and final Wild Card spot. The two teams do not play each other in the regular season so there will be no head-to-head tiebreaker, and they currently have identical conference records. The next tiebreaker is record in common games, but the two teams need to have a minimum of four common opponents before that one is valid and at the moment they only share three foes (that will change by the season's end). That sends them to the next tiebreaker, which is strength of victory, and the Saints are way out ahead in that one. The five teams New Orleans has beaten have a combined winning percentage of .549, while the five teams the 49ers have beaten have a combined winning percentage of just .343. That's actually the worst strength of victory mark among all the teams currently outside of the seven playoff spots.

The reason the 49ers are on the outside among the three 5-5 teams in the NFC is explained above. Of course, tiebreaker realities will change countless times over the next seven weeks, so San Francisco would be justified in thinking its got a piece of the postseason pie right now. They are also the hottest of those three 5-5 teams, having won three of their last four. Of course, as is reflected in their low strength of victory number, as discussed above, three of their wins have come against Detroit (0-9-1), Chicago (3-7) and Jacksonville (2-8). The stretch run is a little tougher, with games remaining against the Vikings, Bengals, Titans and Rams.

Things were starting to look grim for the 2-5 Eagles a month ago but they have gotten on a roll since, winning three of four and only dropping one game by three points to the Chargers. Five of the Eagles last six games are against NFC East foes, and those matchups are rarely predictable. Philly also still has its bye ahead of it, as does Carolina. The Panthers recently beat Arizona, albeit without Kyler Murray, and could be an entirely new team down the stretch with Cam Newton back under center. The Buccaneers may have a lot to say about whether or not Carolina makes it to the postseason, as the two teams play in both Week 16 and Week 18. Philly nudges ahead of Carolina on this list because they beat the Panthers in Week Five.

These two teams may be tied and just a game out of the last Wild Card spot, but they appear to be headed in opposite directions. The Football Team has two rousing wins in a row over the Buccaneers and Panthers, and they also beat the Falcons in Week Four. Their next two games are against teams that are currently struggling, a home date with Seattle next Monday night and a trip to Las Vegas in Week 13. Atlanta has lost three of its last four and was able to score a total of just three points in consecutive losses to the Cowboys and Patriots in Weeks 10 and 11.

What Lies Ahead for Tampa Bay:

The Bucs' most immediate concern is next week's trip to play the red-hot Colts in Indianapolis, but there are also home games against the Bills and Saints looming in the next five weeks. Those two teams stumbled in Week 11 but are clearly still formidable opponents. Of those two games, the Week 15 date with New Orleans is probably the most important game left on Tampa Bay's schedule, in terms of both holding onto the division lead and improving its conference record.