NBA.com
Share on FacebookShare Share on TwitterTweet
Phoenix's star point guard delivers 15-plus assists without a turnover for a playoff-record third time. 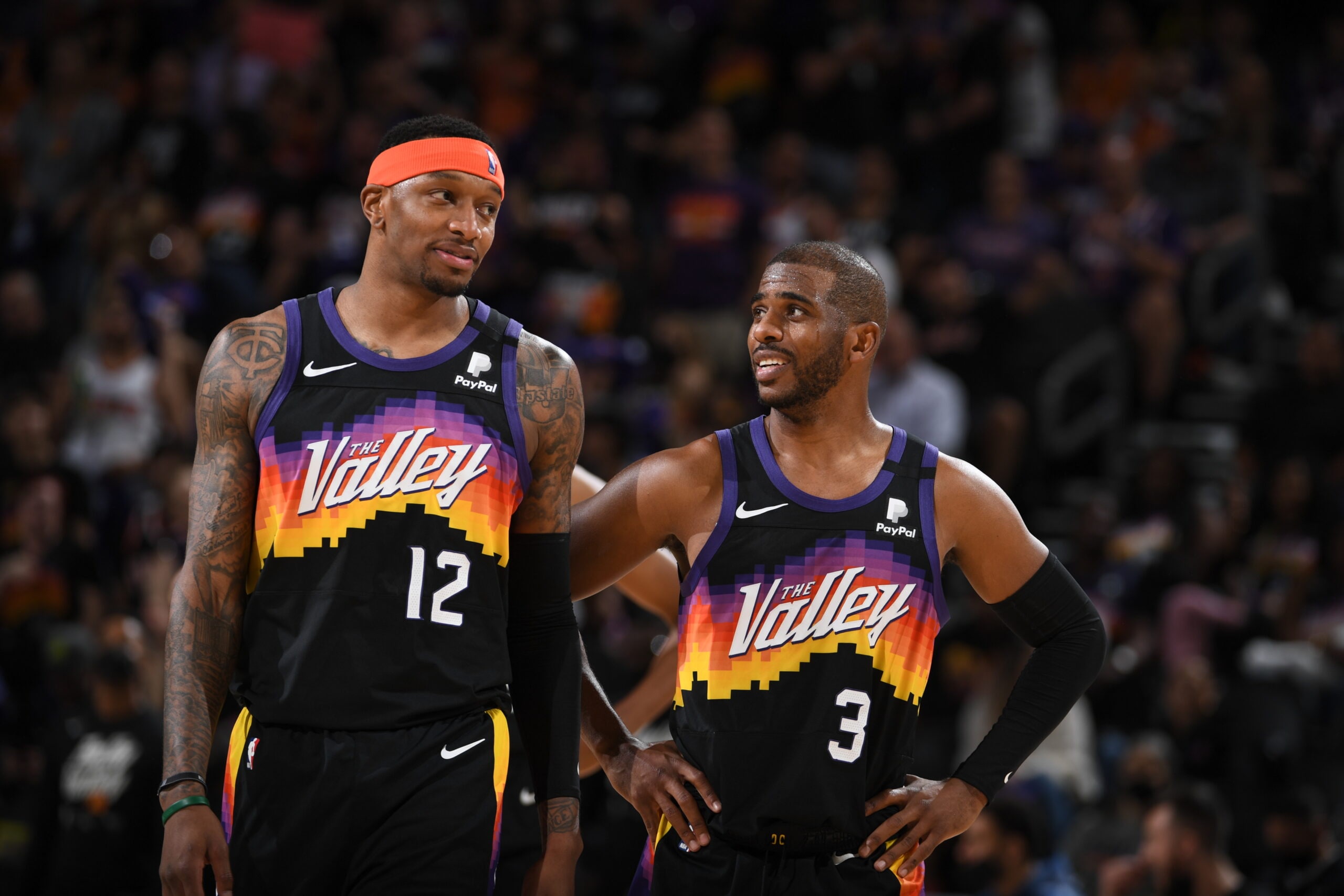 It was all smiles for the Suns after a Game 2 blowout in Phoenix.

Right at this moment, déjà vu from another Chris Paul takeover flooded Phoenix Suns Arena in what might be viewed as the crescendo to a 123-98 win on Wednesday over the Denver Nuggets in Game 2 of the Western Conference semifinals.

Surveying, diagnosing, and then attacking all night, Paul picked apart Denver’s weaknesses for the second-straight game in this series to finish with 17 points and 15 assists with no turnovers as the catalyst to the Suns burning the Nuggets for their most lopsided loss of the season; a defeat that coach Michael Malone called “embarrassing.”

Let’s not diminish Paul’s role in that, or Phoenix’s defense, which gave Denver fits.

Chis Paul scores 17 points to go with 15 assists with zero turnovers to lead the Suns to a win.

As 2020-21 Kia MVP Nikola Jokic argued for a foul with 3:30 left in the third quarter, Jae Crowder snatched a rebound and led a 5-on-4 fast break that Phoenix converted into to a Mikal Bridges dunk that extended its lead to 20 points.

The most fight Denver showed all game came in the form of Aaron Gordon’s shoving match with Crowder at the 7:24 mark of the third quarter that drew a double-technical foul.

That’s the type of night Phoenix forced on the Nuggets.

“It was a team effort once again,” Paul said in his postgame interview on the court. “We knew how important this game was. We just wanted to maintain homecourt advantage and get the win.”

Paul: 'We’ve got an unbelievable team'

Now, Denver needs to find a way to pick up the pieces down 2-0 going into Friday’s Game 3 at Ball Arena because it’s painfully clear that Jokic can’t do it all alone.

Jokic scored a game-high 24 points to go with 13 rebounds and six assists, but the Denver supporting cast didn’t do much supporting.

Second-leading scorer Michael Porter Jr. suffered a back injury in Game 1 that clearly affected his performance in Game 2. Porter shot 3-for-13 from the field and 2-for-9 from range for 11 points, ending the game a team-worst minus-26, as Paul and the Suns pounced at attacking the forward’s limited mobility.

As injured star guard Jamal Murray scowled from the bench in street clothes with an ice pack over his left knee, Paul dished more assists than the entire Denver starting lineup combined. Phoenix exposed the talent discrepancy between the teams in the backcourt. Porter and starting Nuggets guards Austin Rivers and Facundo Campazzo combined to shoot 6-for-25 from the floor and 4-for-18 from 3-point range.

Denver committed 11 turnovers that Phoenix converted into 12 points as they outscored the Nuggets 14-8 on the break.

“It’s contagious, and it’s been that way from the start,” Booker said. “You definitely don’t want to be the guy that’s out there not defending. You’ll stick out like a sore thumb.”

Sort of the way Paul’s precision performances have shined through over the last two games with the guard, at 36 years old, recording double-doubles in Games 1 and 2.

Game 2 marked Paul’s third playoff outing with 15-plus assists and no turnovers, which registers as the most such games in NBA history. Paul also passed Jerry West for 14th on the all-time playoff assist list in Game 2, and now has dished 974 assists in the playoffs. Paul is just 13 assists away from tying Isiah Thomas for 13th in league annals.

Over the last three games, Paul has carved up opponents for 38 assists with just two turnovers.

“Just reading the game man. Just finding open guys, picking my spots,” Paul said. “We’ve got an unbelievable team in the way that we’ve got shooters.”

Paul’s ability to consistently find them will ultimately decide this series. Surrounded by dead-eye shooters in Booker and Crowder (15 points), Paul makes a habit of involving the rest of the Suns such as Mikal Bridges (16 points) and Deandre Ayton (15 points, 10 rebounds) as early as possible, sometimes sacrificing his own offensive game in the process.

Through the first three quarters, Paul had scored only 9 points, while dishing 13 assists.

Denver clearly can’t lean on such a strong supporting cast alongside MVP Jokic.

Will Barton returned to action for the first time since Apr. 23 and provided a solid spark on restricted minutes (10 points in 16 minutes). Perhaps Malone reinserts Barton into the starting lineup for Game 3. Barton started in 52 games during the regular season.

Porter is shooting 35% from the field and 29% from 3-point range so far this series.

“But we’ve been a really good road team all season,” he said.

It’s not difficult to tell why.

Michael C. Wright is a senior writer for NBA.com. You can e-mail him here, find his archive here and follow him on Twitter.

The views on this page do not necessarily reflect the views of the NBA, its clubs or Turner Broadcasting.