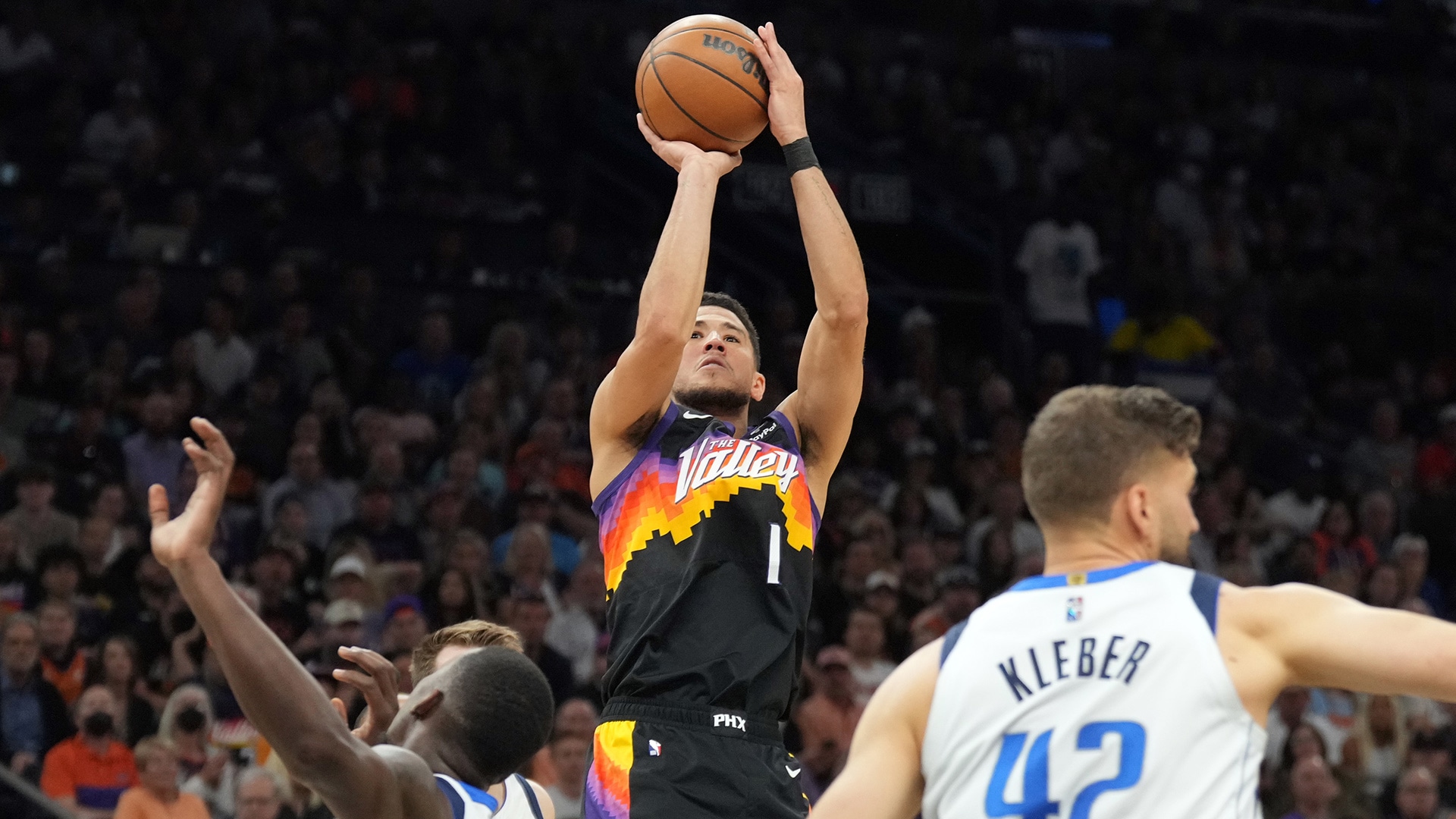 Phoenix outscored Dallas 33-14 in the 3rd quarter of Game 5 to spark its win.

PHOENIX — The Phoenix Suns returned to their transition roots Tuesday in besting the Dallas Mavericks 110-80 in Game 5 of the Western Conference semifinals, as Devin Booker racked up a team-high 28 points, serving as the catalyst for a monstrous third quarter that ultimately decided the outcome.

League history tells us that winners of Game 5 of a best-of-seven series advance to the next round 80% of the time.

“It was the defense tonight,” Suns coach Monty Williams said. “When we get stops like that, and are able to get out in transition, it gets us going, it gets our crowd going, and I firmly believe that defense travels. That’s the one thing you can do in any gym.”

Here are five takeaways from Phoenix’s Game 5 win in which the Suns avoided three consecutive losses for what would’ve been the first time in all of 2021-22.

Coming off the defeats in Games 3 and 4, Williams fought off the urge to overdo it with adjustments for Game 5. He admitted the thought was “something that’s been on my mind since I got on the plane and left Dallas.” But the 2021-22 NBA Coach of the Year resisted, and actually scaled back on potential tweaks instead of adding more.

“Sometimes, simplicity is better, at least to start,” Williams said. “How do we make sure we’re doing what we’re supposed to do before we change and adjust? Throughout the game, you’re gonna make adjustments. But we’re thinking more foundational defensive concepts. We do fight that urge to adjust too much.”

Phoenix leaned on the trio of Mikal Bridges, Jae Crowder and Chris Paul early on as primary on-ball defenders against Dallas superstar guard Luka Doncic, and all three made Game 5 a physical affair. Doncic seemed unaffected initially, pouring in 18 points on 7-of-16 shooting in the first half with no turnovers. But the 23-year-old point guard couldn’t get the rest of the Mavericks involved (two assists) in the first half, and that carried over into the game-deciding third quarter.

Dallas would commit 12 turnovers in its disastrous third period, while the Suns piled up 18 points off those giveaways. What’s important to note here is the Mavericks entered Tuesdays’ game averaging a 2022 playoffs-best 9.7 turnovers in the postseason. No other team averaged fewer than 10 turnovers per game this postseason.

At halftime, Phoenix led 49-46. But the floodgates opened during a 33-14 third quarter in which the Suns forced six turnovers from Dallas’ main ballhandlers (Doncic and Jalen Brunson). The last team to commit 12 turnovers in one quarter of a postseason game was the New York Knicks in the second quarter of a 100-67 loss on April 28, 2012 against the Miami Heat.

“They were all aggressive, and we didn’t play smart in the third quarter offensively or defensively,” Doncic said. “The Suns did a great job defensively by keeping us pinned on the perimeter. So, we will give them credit.”

Dallas racked up 16 turnovers in Game 5, which lead to 24 points from Phoenix. The Mavericks dished a total of only nine assists on 27 made baskets, which certainly isn’t a recipe for success. It actually marked the first time an NBA team totaled fewer than 10 assists in a playoff game since 2016 (Charlotte Hornets at Miami). Doncic, meanwhile, finished with the fewest assists (2) of his postseason career.

2. ‘Chris and Book are coming’

That’s the warning Mavericks coach Jason Kidd issued to his team in the lead-up to Game 5 because he knew Paul wouldn’t struggle for three consecutive games. Plus, Booker was coming off a 35-point performance in Game 4 as the series returned to Phoenix.

“We know what’s coming,” Kidd said 90 minutes before tipoff. “So, we have to understand there is no [room to] feel your way into the game. They’re gonna attack, and we have to be prepared for that. We’ve talked about it as a team.”

Dallas listened. But executing on the road against a pair of hungry superstars with their backs against the wall represents a more arduous challenge.

Devin Booker converts 11 of 20 shots en route to an efficient 28 points in 35 minutes against Dallas.

While Paul finished with just seven points, he dished 10 dimes and played a major role in Deandre Ayton putting together his best performance since Game 1 of this series (we’ll get to that later). In the process, Paul tied Steve Nash for third in 10-assist games in NBA playoff history (54). Paul now trails just Magic Johnson (143) and John Stockton (100) in postseason 10-assist outings.

Paul expressed relief about Phoenix finally returning to its transition roots. The veteran also logged one steal, which moved him into a tie with Derek Fisher for No. 15 on the NBA’s all-time postseason steals list with 272.

Booker deserves major credit too. The star shooting guard put up 12 points in the decisive third quarter, shooting 3 of 5 from 3-point range, in addition to tallying a pair of steals. Booker now averages 26.8 points per game in this series, and he’s shooting 50% from deep and 87.5% from the free-throw line. A three-time All-Star, Booker has now scored 804 points in 30 career playoff games.

Booker and Charles Barkley are the only two Suns to put up 800 points in their first 30 career playoff games. The 25-year-old is also one of just 18 players in NBA history to produce at least 800 points in his first 30 playoff games. He joins Anthony Davis, Donovan Mitchell, Kevin Durant, LeBron James, Tracy McGrady, Vince Carter and Allen Iverson, who, since 2000, have all accomplished the feat.

“We like getting stops, getting out in transition because we have a lot of athletes, a lot of people that can make plays for each other,” Booker said. “It’s kind of [an] everybody-make-a-play-for-each-other type of offense, and best available shot.”

3. Doncic on the big stage

Doncic tied Booker for the game-high in scoring (28 points), but he finished with just two assists and four turnovers in the Mavericks’ loss.

But don’t expect the fourth-year guard to just shrivel up and shy away Thursday in Game 6 at American Airlines Center. We all know Doncic shines when the lights are brightest, and the stakes are highest.

“I think pretty much his young career has always been on the road when you look at starting in European basketball and being so young, being away from home playing in Spain,” Kidd explained. “Just [him] understanding the environment of him against the whole team. He doesn’t mind that. So, he’s done it here. He’s not afraid of the stage at 23. You saw it in the Olympics, you’ve seen it in the playoffs this year and you saw it in the playoffs last year. That’s a good trait to have.”

4. Ayton gets his wish

Deandre Ayton expressed a desire to “get back to Game 1, period” during Tuesday’s shootaround. Ayton poured in 25 points to go with eight rebounds on 20 shots to start out this series. He’s put up 20 shots in just two of his 11 playoff outings in 2021-22.

“Just got to get back to Game 1 and accept ‘hard.’ We’ve just got to accept the physicality,” Ayton said.

The center scored 20 points on 9-of-13 shooting in Game 5, with eight points coming in the decisive third quarter, as he finished with a team-high nine rebounds with two assists. The performance marked Ayton’s 14th career game with 20 points or more.

5. Some history for Phoenix

Phoenix limited the Mavericks to just 80 points in Game 5, marking just the sixth time in franchise history the Suns held an opponent to 80 points or fewer in a postseason outing. If you didn’t know, the Suns are 6-0 in those games.

Phoenix’s 30-point win was also just the fifth time in franchise postseason history it won a game by that margin or more.

A seven-year veteran playing in just his second postseason, Booker said he’s always prepared for these moments, even when they appeared farfetched.

“Even in those seasons where we didn’t make it, I sat there, I took that anger to the gym and just imagined myself being in those situations,” Booker said. “Imagination is a big part of this. So, I had to use some imagination playing in playoff games in my workouts. I guess it’s working out a little bit, but we’ve got some room to grow.”

Michael C. Wright is a senior writer for NBA.com. You can e-mail him here, find his archive here and follow him on Twitter.

The views on this page do not necessarily reflect the views of the NBA, its clubs or Turner Broadcasting.