CNN
Share on FacebookShare Share on TwitterTweet
The Senate on Wednesday approved a historic, $2 trillion stimulus package to provide a jolt to an economy reeling from the coronavirus pandemic, capping days of intense negotiations that produced one of the most expensive and far-reaching measures Congres 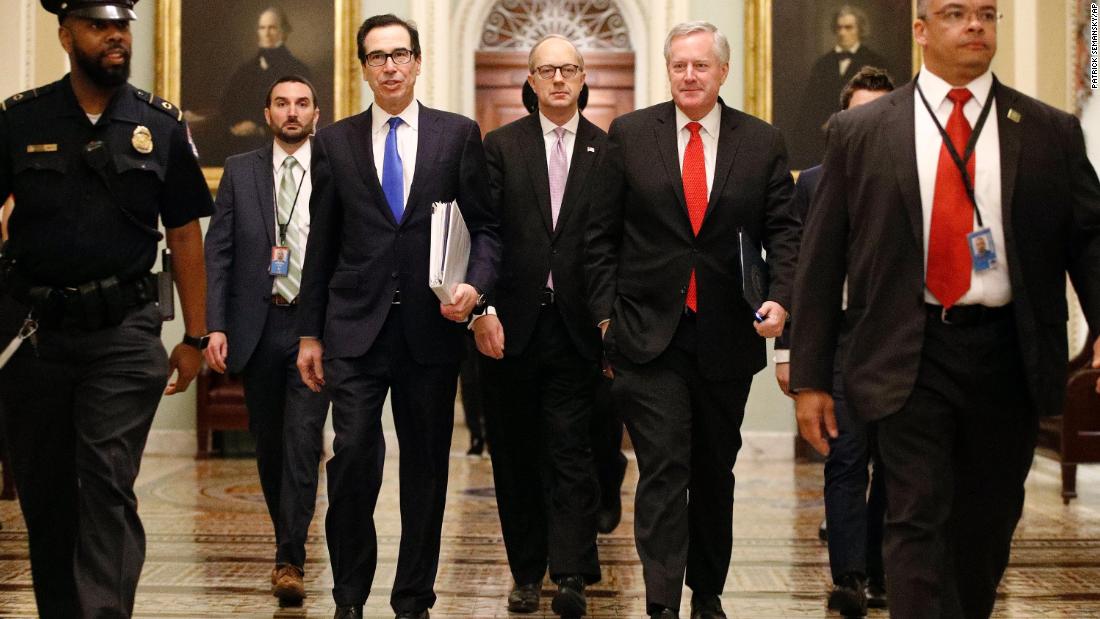 In a remarkable sign of overwhelming bipartisan support for the legislation, the vote was unanimous at 96-0.
The legislation represents the largest emergency aid package in US history and the most significant legislative action taken to address the rapidly intensifying coronavirus crisis, which is overwhelming hospitals and grinding much of the economy to a halt.
It will next go to the House for a vote. House Majority Leader Steny Hoyer announced Wednesday evening ahead of Senate passage that the House will convene at 9 a.m. on Friday to consider the relief package. The plan is to pass the bill by voice vote, a move that would allow the House to avoid forcing all members to return to Washington for a recorded roll call vote.
President Donald Trump has indicated he will sign the measure.
The White House and Senate leaders struck a major deal early Wednesday morning on the package. Senate Majority Leader Mitch McConnell formally announced the agreement on the Senate floor, describing it as "a wartime level of investment for our nation."
LIVE UPDATES: Coronavirus pandemic alters life as we know it
Legislative text of the final deal was released Wednesday evening ahead of a final vote. Key elements of the proposal are $250 billion set aside for direct payments to individuals and families, $350 billion in small business loans, $250 billion in unemployment insurance benefits and $500 billion in loans for distressed companies.
The plan will deliver a massive infusion of financial aid into a struggling economy hard hit by job loss, with provisions to help impacted American workers and families as well as small businesses and major industries including airlines.
Under the plan, individuals who earn $75,000 in adjusted gross income or less would get direct payments of $1,200 each, with married couples earning up to $150,000 receiving $2,400 -- and an additional $500 per each child. The payment would scale down by income, phasing out entirely at $99,000 for singles and $198,000 for couples without children.
In addition, the bill would provide a major amount of funding for hard-hit hospitals -- $130 billion -- as well as $150 billion for state and local governments that are cash-strapped due to their response to coronavirus.
It also has a provision that would block Trump and his family, as well as other top government officials and members of Congress, from getting loans or investments from Treasury programs in the stimulus, according to Minority Leader Chuck Schumer's office.
Hard-fought negotiations
A deal came together after hard-fought negotiations between congressional Republicans, Democrats and the Trump administration.
After two consecutive days of high-profile setbacks -- with Senate Democrats blocking procedural votes on Sunday and Monday over opposition to a bill initially crafted by Senate Republicans -- a deal appeared to be imminent by Tuesday morning, but was ultimately not announced until the early hours of Wednesday morning.
Democrats had argued over the course of negotiations that they wanted to see more safeguards for American workers in the deal and oversight for how funding would be doled out.
There was intense partisan debate over the $500 billion proposal to provide loans to distressed companies, with $50 billion in loans for passenger air carriers. Democrats initially contended there was not enough oversight on how the money would be disbursed, but the Trump administration agreed to an oversight board and the creation of an inspector general position to review how the money is spent.
There has also been controversy over the stimulus plan's unemployment benefits.
On Wednesday afternoon, the package hit a last-minute snag with a group of Republican senators arguing that it would incentivize unemployment and could trigger worker shortages and supply disruptions by providing more money to some unemployed workers than they would make working.
"This bill pays you more not to work than if you were working," GOP Sen. Lindsey Graham of South Carolina said. "You're literally incentivizing taking people out of the workforce at a time when we need critical infrastructure supplied with workers."
Republican critics secured a Wednesday evening vote on an amendment to cap unemployment benefits at 100% of the wages workers received while employed, but the amendment did not pass.
Legislation heads to the House next
House Speaker Nancy Pelosi is now emphasizing that Democrats should "recognize the good" in the massive stimulus.
"What is important is for us to recognize the good that is in the bill, appreciate it for what it does. Don't judge it for what it doesn't because we have more bills to come," the California Democrat told CNN's Wolf Blitzer on "The Situation Room" Wednesday evening.
Those comments came just after Pelosi told House Democrats on a series of conference calls that she is already thinking about the substance of the fourth coronavirus relief package that Congress will have to pass to respond to the crisis, according to sources on the calls.
Pelosi made it clear to members who are disappointed that the pending bill did not include enough of their priorities that they will have a chance to add those provisions in the fourth package, the sources said.
But passage in the House has been made more daunting by the fact that several of its members have tested positive for coronavirus, while many more have self-quarantined after contact with infected individuals.
A voice vote is a procedural move that would avoid a recorded roll call vote, which would have forced members now dispersed throughout the country to travel back to Washington to get the stimulus across the finish line.
"Members are further advised that due to the limited flight options, Members participating in self-quarantine, and several states mandating stay-at-home orders, we expect the bill to pass by voice vote on Friday," Hoyer announced in a notice to members Wednesday evening.
Pelosi had suggested on Tuesday that she was hoping to avoid bringing the full House back to Washington to vote on the package, seeking to pass it through unanimous consent instead. But any individual member can block such a move, which would make passage more difficult.
This story has been updated to include additional developments Wednesday.