Sixers Wire
Share on FacebookShare Share on TwitterTweet
The Philadelphia 76ers are in awe of what Joel Embiid has been able to do on a torn meniscus. 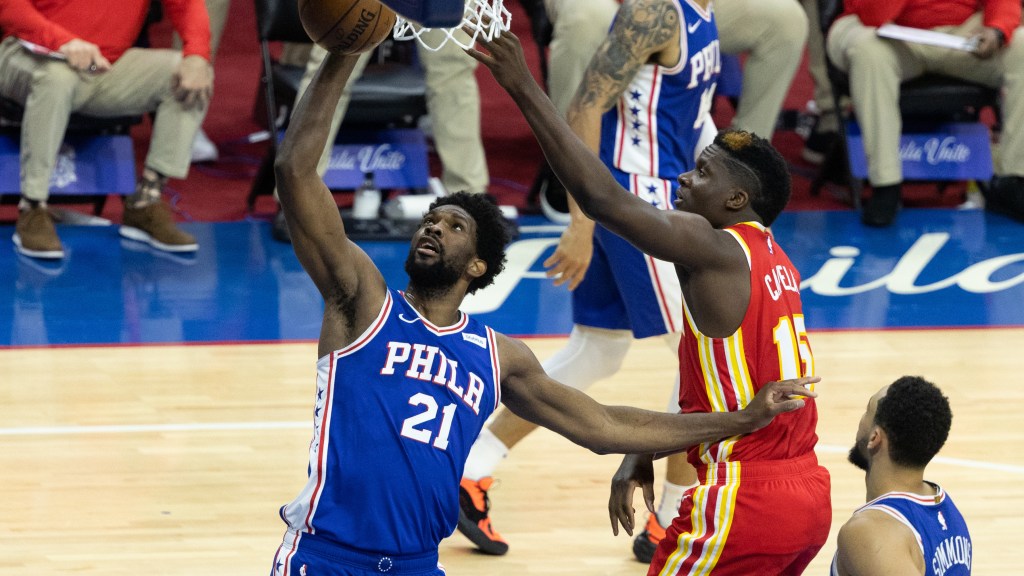 The Philadelphia 76ers are in the middle of a playoff run and as they continue with their postseason run, their hopes will depend on their superstar big man and MVP runner-up, Joel Embiid.

That is why the entire city of Philadelphia held its collective breath on May 31 when Embiid left the team’s Game 4 road loss to the Washington Wizards. Nobody knew what the injury was at the moment or how long he would be out and that was concerning.

After being diagnosed with a small lateral meniscus tear in his right knee, he missed Game 5 against the Wizards, but he returned to begin Round 2 against the Atlanta Hawks and he has been dominant. He has scored 79 points through two games including scoring a playoff career-high 40 in Tuesday’s Game 2 win over the Hawks.

“That was awesome,” said coach Doc Rivers. “I don’t know if the MVP thing did anything to him or not. I remember being on the other side of the night that David Robinson got the MVP and we had to play (Hakeem) Olajuwon I was on that Spurs team, that didn’t go well for us tonight. You felt like that was Joel, he was that magnificent, dominant for us early on, but it was absolutely a team effort. I just thought he set the tone for us and that’s what he has to do obviously.”

Playing with a torn meniscus is not easy in the slightest and Embiid has made it look so easy out on the floor. The big fella has been absolutely terrific and he has really put his body on the line to get wins in the postseason.

“He’s doing a great job,” said Tobias Harris. “I think that he’s coming out and dominating, but once you step on that floor, there is no excuses. He understands that this is the playoffs. The way that NBA season was, I don’t think anybody is 100% so when he steps on that floor he has that attitude and mentality, that’s to win.”

When a team sees its leader playing through a tough injury such as this one, it can inspire others to step up and give it their all as well. For example, a guy like Seth Curry who has been battling injuries all season, can see that and want to push through whatever ailment is bothering him at the moment.

“It’s huge for us,” he explained. “He’s been our anchor all year. We count on him for a lot of stuff on offense and defense. It comes a time in the season where you got to play through injuries and he’s doing just that. We follow his lead out there on the court. Especially here at home, it gives us an extra boost, whenever he walks out there, and he’s playing hard.”

For the Sixers, this has been nothing new for them to see. Embiid has been putting up dominant performances all season long and the big fella is showing no signs of slowing down despite the injury he’s dealing with.

“You just saw the dominance of him as a player, what he’s able to do,” Harris added. “I thought defensively, he was key for us just disrupting their pick-and-roll. He’s been amazing. When you go out there and get 40 and 13 and play the way he played, that’s a huge effort from a player.”

The scene now shifts to Atlanta for Game 3 on Friday with the series now 1-1 thanks to Embiid’s big night.