Yahoo Sports
Share on FacebookShare Share on TwitterTweet
Joel Embiid was too strong and too skilled for the Wizards on Saturday night, scoring 36 points in a 132-103 Game 3 win by the Sixers. By Noah Levick 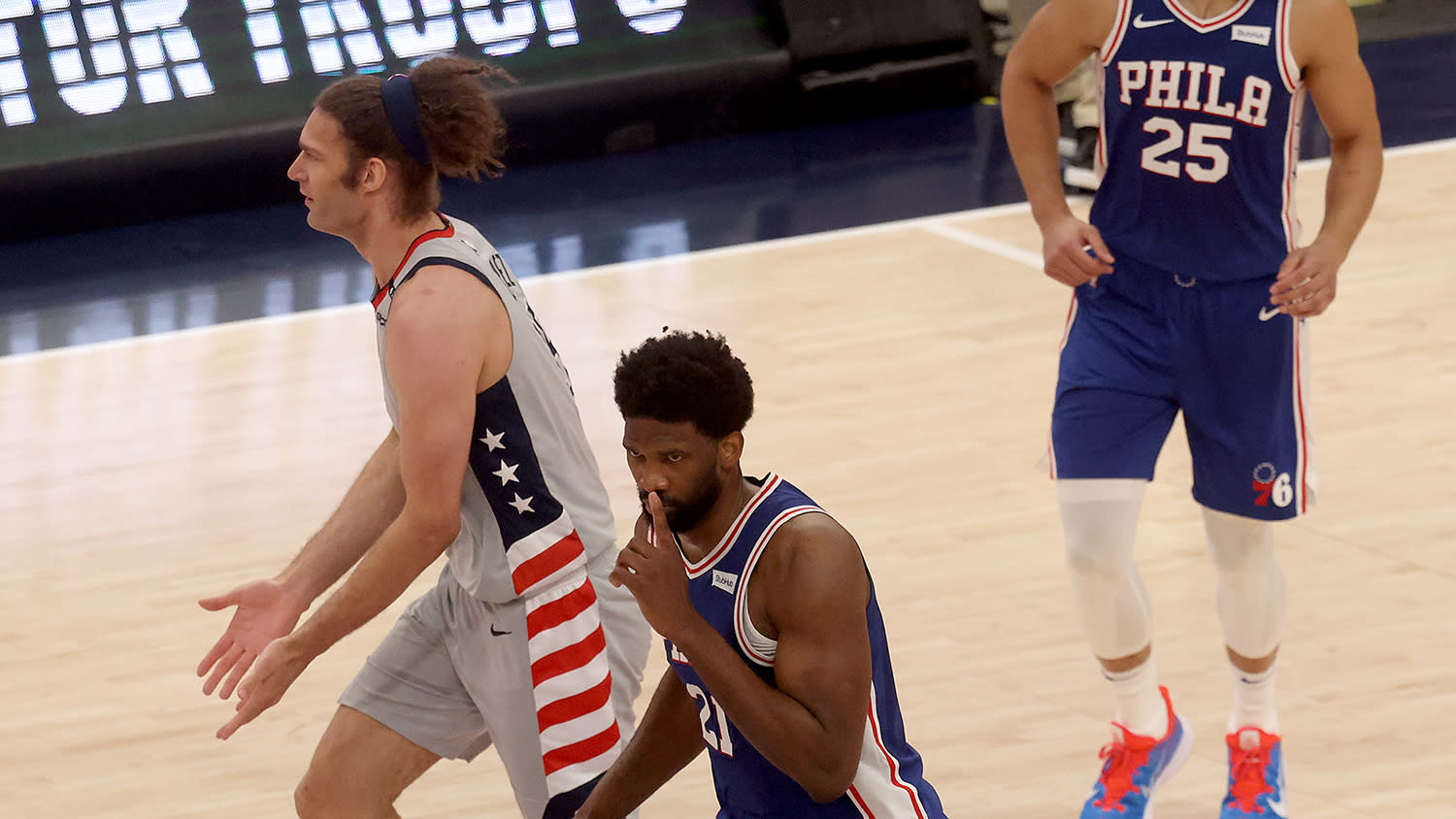 In the last game Joel Embiid played at Capital One Arena before Saturday night, he suffered a left knee bone bruise, an injury he feared might end an MVP-caliber season.

Game 3 of the Sixers’ first-round playoff series was a much more enjoyable evening for him.

The Sixers lead the series 3-0 and can advance to the second round with a victory Monday night in Game 4.

Russell Westbrook (right ankle sprain) was a game-time decision but suited up and had a triple-double with 26 points, 12 rebounds and 10 assists. Bradley Beal needed 26 field-goal attempts to score 25 points.

Here are three observations on the Sixers’ decisive Game 3 win:

Perhaps deterred by Ben Simmons and Tobias Harris’ efficient Game 2 performances, Washington was more conservative in sending help on Embiid. That was a dangerous approach.

Embiid is too strong and too skilled for any player on the Wizards. He has been a stellar jump shooter this season, with the caveat “for a 7-footer” not required. With his shots falling from the perimeter, his slow-motion pump fakes were especially convincing Saturday night.

The MVP finalist was in peak form in the second quarter, seeming to make the correct decision every time he received the ball. The Sixers have been good this year about ensuring Embiid touches it on every possession when he’s rolling, too.

Embiid narrowly missed one thunderous dunk attempt late in the second quarter. He sensed an opportunity for another one soon after, though, and delivered. Playing the WWE heel role, he asked the home fans to increase the volume of their boos.

The Wizards did not guard Embiid (or the Sixers in general) intelligently, and he capitalized on many of their mistakes. Alex Len fouled him about 65 feet from the hoop with just 0.8 seconds left in the first half.

The other two members of the Sixers’ Big 3 again had clear matchup advantages. Simmons was aggressive in his initial stint and recorded 14 points and nine assists in the game. He’s played very well in the series’ first three games despite missing all nine of his free throw attempts.

Harris, who posted 20 points, 13 rebounds and five assists, has shot 57.1 percent in the series.

Seth Curry was not at all reluctant to shoot early, knocking down one jumper from the right corner and then another from the opposite corner.

Sixers head coach Doc Rivers has encouraged him to fire throughout the season.

“We obviously brought it up in our pre-playoff package to the team about what everybody should do more and what they can do better,” Rivers said pregame. “I just told him, 'I don’t think I’ve told a lot of shooters they should shoot open shots more.' But he’s doing it and it’s good, because he is such a threat. It really helps our offense.”

Nobody on the Sixers was hesitant to put up long-range jumpers and Danny Green led the way, converting 5 of 9 threes. The 33-year-old missed a heat check from close to 30 feet out in the second quarter. Fair enough.

Wizards head coach Scott Brooks brought Davis Bertans into his starting lineup in place of Raul Neto. One reason for that logical move was Bertans’ shooting skill and the fact that Washington was coming off of a ghastly Game 2 from three-point range (2 for 22).

Bertans did not singlehandedly solve that issue. He made 1 of 5 threes and Washington went 8 for 25 as a team.

Bertans is nine inches taller than the 6-foot-1 Neto, whom the Sixers frequently targeted on defense in Games 1 and 2. He was not a significant defensive upgrade, though. The Sixers’ ball movement was excellent and no Wizards coverage ever seriously stymied them.

Tyrese Maxey played over Shake Milton in an all-bench Sixers lineup at the end of the first quarter.

With Maxey looking good early in the series and Milton 0 for 6 from the floor in Game 2, it wasn’t a stunning move. Rivers acknowledged before the game that the Sixers don’t think Milton is best as a primary ball handler.

“We don’t have him bringing (the ball) up as much as he has in the past, for sure,” Rivers said. “I think just the ball pressure alone bothers him.”

Though he’s a 20-year-old rookie, Maxey is a self-assured, low-turnover player. The potential downside of playing him and leaving out Milton is removing a good three-point shooter from the mix.

Even if Maxey is a preferred option for the time being, the Sixers would sure like if Milton could make a few shots and get into an offensive groove. He played in garbage time as the Sixers closed out another comfortable playoff victory.