3 observations: Joel Embiid, Sixers get even with Trae Young, Hawks

Sixers Wire
Share on FacebookShare Share on TwitterTweet
Joel Embiid and the Philadelphia 76ers were able to pull even with Trae Young and the Atlanta Hawks in Game 2 at home. 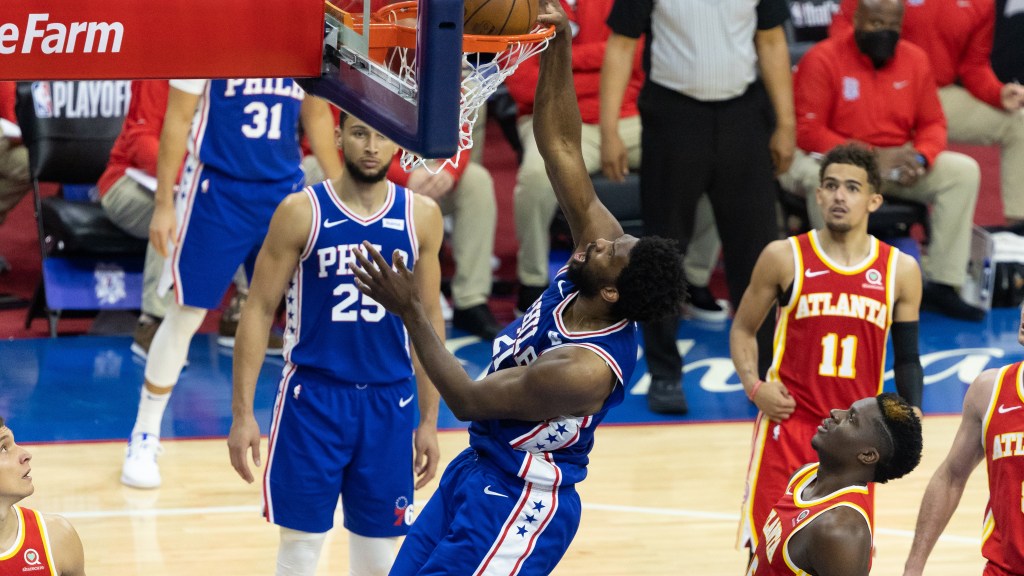 After dropping Game 1 at home, the Philadelphia 76ers were in desperate mode heading into Game 2. They could not afford to head to Atlanta down 0-2 against a young Hawks team that was growing confidence daily led by third-year man Trae Young who has not been afraid of the bright lights of the postseason.

Led by MVP runner-up Joel Embiid, the Sixers were able to come away with a 118-102 win in Game 2 to even the series at 1. The big fella led Philadelphia with 40 points and 13 rebounds in a game the Sixers absolutely needed to have considering the circumstances.

Tobias Harris chipped in with 22 points and six rebounds, Seth Curry added 21 points, and Ben Simmons had four points and seven assists while Danny Green had eight assists in order to help Embiid get a win in this one. Shake Milton had 14 off the bench to seal the win in the second half.

Here are the observations after a much-needed win in South Philadelphia:

Coach Doc Rivers made the adjustments needed heading into Game 2. After Young cooked every defense that the Sixers threw at him on Sunday, Philadelphia started Simmons on him this time and his length bothered the diminutive star from the outset as he was forced into a couple of turnovers. What Simmons did was force Young to either side of the floor which gives him less space. In Game 1, he feasted on being able to attack the middle of the floor, and that attributed to the turnovers he committed.

On the other end, the Sixers hunted him on defense. He was switched onto Harris a couple of times early and he was exploited. Young is not a good defender and Philadelphia should make him a factor on that end in terms of being involved in every play and tiring him out a bit. Young was not able to score as well as he did in Game 1 as Philadelphia made the right adjustments there, but he was a huge factor with his passing outside of a few bad turnovers.

Trouble with the others

The Sixers did a solid job on limiting Young as best they could, but it was the others that gave them trouble. Danilo Gallinari and Kevin Huerter had 15 points each off the bench in the first half as they kept the Hawks in the game. Philadelphia should have been up by much more than two points at halftime, but Atlanta got a lot of support from their role players to stay in the game.

The Sixers were able to combat this by getting production from a guy like Curry who was lights out from deep and the bench having one of their random great stretches that nobody sees coming, but Philadelphia will need more from Danny Green in terms of his shooting. He was finally able to get a shot to fall from deep in this one, but he needs to find his rhythm going forward in this series.

The bench taketh, the bench giveth

The unit was an absolute disaster in Game 1, but they were almost just as bad in the first half of this one. Philadelphia held a 31-20 lead after one quarter and coach Doc Rivers started the second with a lineup of Harris, George Hill, Furkan Korkmaz, Tyrese Maxey, and Dwight Howard. Atlanta then cut into the deficit and pulled to within 35-33 before Rivers put the starters back in to begin restoring order a bit.

That is until Milton absolutely came alive in what was an unforeseen stretch. After losing his spot in the rotation to Maxey, he had not played in a while and he came in and knocked down two ginormous triples in the third quarter, including a heave to beat the buzzer. He then knocked down two more 3-pointers in the fourth as he gave the team a huge spark.

Considering that this is the playoffs and it is Round 2, Rivers should begin thinking about shortening the rotation a bit. Matisse Thybulle, Howard, and Hill should definitely be in the rotation, but relying on a rookie like Maxey at this stage is asking a lot despite his obvious talent and Milton might have earned his rotation spot back. As for Korkmaz, if he is not making his 3-pointers, it’s hard to justify having him out there in the playoffs.