Hot topics close
Home Raiders Raiders' turnaround in 2019 starts with Jon Gruden, a dark horse for Coach of the Year

Raiders' turnaround in 2019 starts with Jon Gruden, a dark horse for Coach of the Year

CBS Sports
Share on FacebookShare Share on TwitterTweet
Raiders turnaround in 2019 reasserts the brand of Jon Gruden, after tumultuous start in his second stint 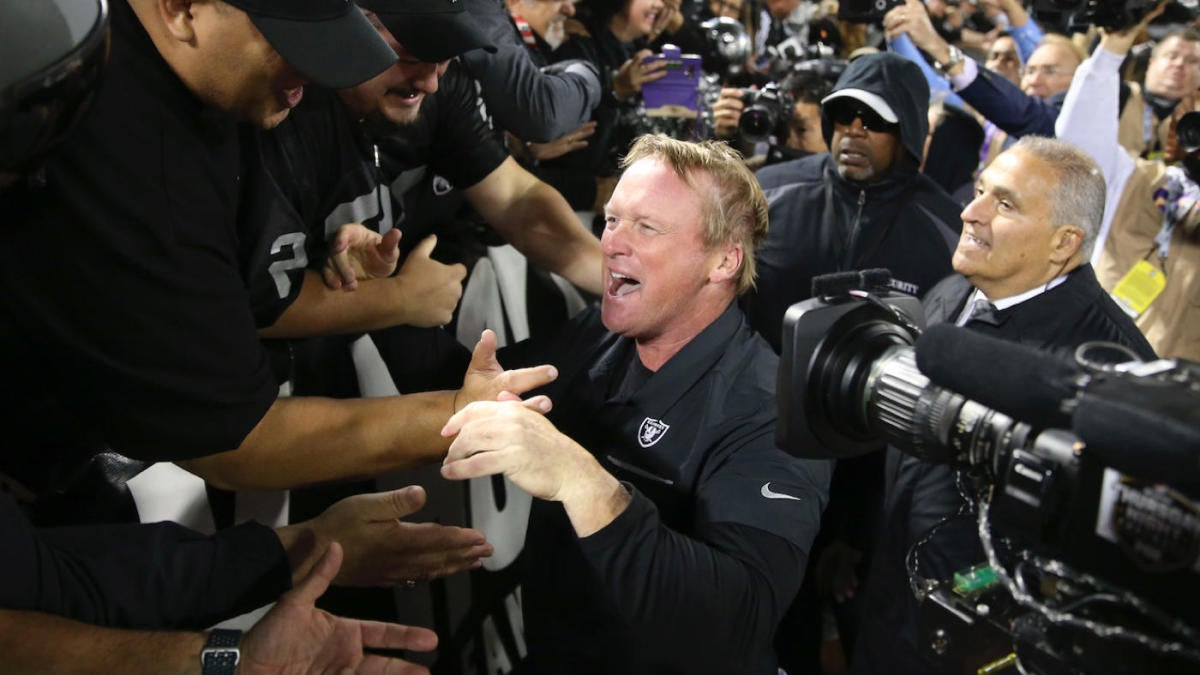 Let's all be blatantly honest here. No one outside of the Oakland Raiders organization, who isn't a rabidly optimistic fan, believed heading into 2019 that the team would not only be relevant in November, but also in contention for the AFC West crown. Yet, here they are sitting at 5-4 and just 1.5 games back of the division-leading Kansas City Chiefs, by virtue of a loss to them earlier this season, very much in control of their own fate going forward.

This is the same team that went 4-12 in 2018 on the heels of trading away a Hall of Fame pass rush talent in Khalil Mack, and then gave up a third- and fifth-rounder in 2019 to acquire All-Pro wide receiver Antonio Brown, who led the team (and the league) on a wild goose chase that involved a helmet dispute, frostbitten feet, an altercation with general manager Mike Mayock that reportedly involved him using a racial slur, and accusations of sexual assault; and all over a span of five months.

In the end, the Raiders were forced to admit their mistake and release Brown without him having suited up for a single game, making him the second All-Pro talent in Jon Gruden's latest stint that as Raiders coach that he didn't actually, well, coach -- in a single game. That's two black eyes for Gruden in just over one calendar year, and it turned the Raiders into the laughingstock of the league this summer, but that's all changed in a matter of eight games.

They're now winners of two straight after downing the rival Los Angeles Chargers -- a team hot off of a beatdown of the high-powered Green Bay Packers -- and their remaining seven games are quite favorable.

The quick turnaround within the organization started with the hiring of Gruden away from ESPN in 2018, who then recruited Mayock away from NFL Network to help him right the ship. The former has been chided for being too old school in his approach to football, and that's justifiable at times, but credit him for being a hard-nosed leader of men, assuming those men have a thick enough skin to take what he's dishing out.

Knock on wood if you're with me here.

"[The win over the Chargers] says a lot about our team," Gruden said following the game. "We got a lot of resilient guys that are going to keep competing. You may beat us, but we're going to be a hard out to get. We're going to battle. That's all I can say about this team. We are very happy with our foundation -- our process. A lot of guys deserve credit."

"We have a long season left to play," Gruden said. "We have so many guys hurt. I'm more worried about [preparing for] the Bengals [on Friday]."

And so it goes with the Raiders, that they've fully absorbed the energy of Gruden, who gets high off the hog when the team wins but refuses to float for more than 24 hours. When they lose, however, the hell fury lasts the entire week, or until the team figures out how to pop the cap on the nearest fire hydrant. That won't be necessary going into Week 11 against the winless Bengals with another win in tow, and it's not just that the Raiders are a legacy organization finally back to their winning ways, but that much more impressive is who they're succeeding without.

Outside of the aforementioned Mack and Brown, on injured reserve sits defensive end Arden Key, newly-acquired running back Isaiah Crowell, and linebacker Vontaze Burfict is currently serving an indefinite suspension for an illegal hit on Indianapolis Colts' tight end Jack Doyle in Week 4. They may very well also be without former 14th-overall pick Karl Joseph, with the safety nursing a foot injury the team reportedly fears could be serious -- per Ian Rapoport of NFL Network. If Joseph misses time, it'll be a devastating blow to the safety unit, seeing as 2019 first-round pick Johnathan Abram is also on IR.

The availability of Joseph up to this point notwithstanding, Gruden has the Raiders finding ways to win with a piecemeal team, and that includes having taken a risk on tight end Darren Waller, who now leads the team in receiving. Another gambit was selecting running back Josh Jacobs in the first round of the 2019 NFL Draft when many had him graded as a third-round talent, only to see Jacobs break a rookie rushing mark held by Hall of Fame halfback Marcus Allen, having already rushed for 811 yards and seven touchdowns along with another 134 yards receiving.

The breakout seasons of Waller and Jacobs have led to a resurgent Derek Carr, a player Gruden went to bat for early and often against naysayers. All told, while there's plenty of football left to play, Gruden deserves a ton of credit for what's happening in Oakland, making for an impressive farewell tour as they ready for a move to Las Vegas. Although there are a lot of solid candidates, Gruden has positioned himself in the mix for the 2019 AP NFL Coach of the Year honors.

While the organization is excited about Vegas, Gruden will miss Oakland-Alameda Coliseum, lovingly referred to as The Black Hole, and getting into the fan-fray following home wins -- as he did after the defeating the Chargers on "Thursday Night Football".

"No, I'd never rethink [getting in there with fans]," Gruden said. "Every win, I'm going down there. I got face paint all over me. I got to see some costumes I have not seen before in any football games. Awesome."

Considering the grave they've climbed out of, and despite having four losses, they're above .500, hot on the heels of the Chiefs; and Gruden is in the conversation for Coach of the Year honors. For a storied organization like the Raiders that has seen more than its fair share of hard times lately, they've found a way to just win, baby.

And that, too, is awesome.