CNN
Share on FacebookShare Share on TwitterTweet
Power gas gone out across all of the US territory of Puerto Rico on Sunday, according to PowerOutage.us, as Hurricane Fiona bears down on the islands, which are already grappling with the threat of flooding and mudslides stemming from the Category 1 storm
CNN  —

Hurricane Fiona made landfall along the extreme southwestern coast of Puerto Rico near Punta Tocon at 3:20 p.m. ET with winds of 85 mph, according to the National Hurricane Center.

Power has gone out across all of the US territory of Puerto Rico on Sunday, according to PowerOutage.us, as Hurricane Fiona bears down on the islands, which are already grappling with the threat of flooding and mudslides stemming from the Category 1 storm.

“Puerto Rico is 100% without power due to a transmission grid failure from Hurricane Fiona,” the website said.

Gov. Pedro Pierluisi confirmed the outage in a tweet, noting the entire electric system was out of service and officials have activated the proper protocols to work to restore power.

The blackout – whichfollowed hours of progressively worsening power outages – comes five years after Puerto Rico’s power grid was devastated by Hurricane Maria in September 2017, leaving many residents without electricity for months. But officials have stressed it won’t be like last time: Not long before the lights went out, Abner Gomez, head of public safety and crisis management at LUMA Energy, which operates Puerto Rico’s power grid, said utility authorities plan to repair and restore electricity with the help of local government agencies.

“This is not Maria, this hurricane will not be Maria,” Gomez said.

Fiona has continued to strengthen Sunday and now packs sustained winds of 85 mph, according to the National Hurricane Center’s update at 2 p.m. ET, at which point the storm was about 25 miles southwest of the city of Ponce.

The storm’s impacts have already been felt: At least one death has been reported in Basse-Terre in the French territory of Guadeloupe, according to the vice president of the territory’s environmental agency, who said the capital had been devastated by flooding. And in Puerto Rico, flash flooding has already begun.

Pierluisi warned the storm “will cover our entire island” in a news conference Sunday, noting winds and rain bands from the storm may extend outward up to 100 to 120 miles. “This is impacting us now,” Pierluisi said. “It’s south of Puerto Rico but very close to our coast.”

The hurricane – the third of the 2022 Atlantic Hurricane Season – is bearing down on Puerto Rico, with the eyewall approaching the southern coast, according to the National Weather Service’s office in San Juan.Winds are expected to increase along the immediate coastline, the hurricane center said, while conditions are forecast to deteriorate throughout Sunday afternoon and evening as Fiona moves near or over the southwestern part of Puerto Rico.

There is a possibility Fiona’s center might skirt Puerto Rico, precluding a traditional “landfall.” But regardless, the impacts of the storm remain the same.

The National Weather Service on Sunday warned of life-threatening to catastrophic flooding, issuing flash flood warnings for south and east Puerto Rico, including Ponce and Yabucoa, through at least mid-afternoon. The service said flooding had started after an estimated 1 to 4 inches of rain had already fallen.

Very heavy rainfall of 12 to 16 inches is forecast across a wide swath of Puerto Rico, with most of the rain expected Sunday, and isolated locations across southern and eastern Puerto Rico could see up to 25 inches, per the hurricane center. 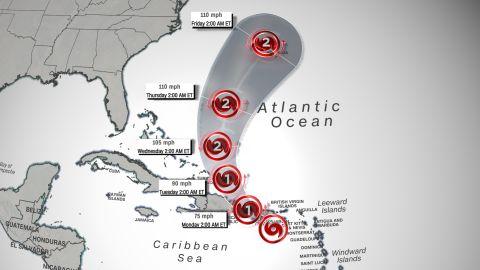 The northern and eastern Dominican Republic, too, is forecast to see 4 to 8 inches of rain, with isolated totals up to 12 inches possible.

“These rains will produce life-threatening flash flooding and urban flooding across Puerto Rico and the eastern Dominican Republic, along with mudslides and landslides in areas of higher terrain,” the hurricane center said.

Already, authorities have responded to one such landslide: Emergency officials responded Saturday evening to a landslide around 8 p.m. ET at an apartment complex in Guaynabo, according to fire and public safety officials. There were no initial reports of injuries.

Puerto Rico officials continue to closely watch the island’s mountain regions, which have suffered landslides in the past and where the soil is saturated from the rain, Pierluisi said.

Around 120 shelters with 25,000 cots have been opened for those in need, the governor said. Classes Monday have been canceled and government workers – save emergency workers – should stay home, too.

A hurricane warning – indicating hurricane conditions are expected – was issued for Puerto Rico, including the islands of Vieques and Culebra, and later expanded to include the eastern Dominican Republic from Cabo Caucedo to Cabo Frances Viejo. The Dominican Republic’s northern coast, from Cabo Frances Viejo west to Puerto Plata, were under a hurricane watch Sunday morning, meaning hurricane conditions are possible in the next 48 hours.

The threat won’t end once the storm passes between Puerto Rico and the Dominican Republic. Further strengthening is expected, and the official forecast track indicates Fiona could be a major hurricane by Wednesday as it tracks to the east of the Bahamas and toward Bermuda.

“It appears likely that Fiona will become the first major hurricane of this Atlantic season in a few days,” the hurricane center said.