Sooners Wire
Share on FacebookShare Share on TwitterTweet
Oklahoma dominated Bedlam tonight as they were in control over rival Oklahoma State from wire-to-wire. They took the first possession of the game right down the field for a quick 7-0 lead and never…

Oklahoma dominated Bedlam tonight as they were in control over rival Oklahoma State from wire-to-wire.

They took the first possession of the game right down the field for a quick 7-0 lead and never really looked back. The game was never within two scores after the Sooners got out to a 14-0 lead.

This was arguably Alex Grinch’s finest performance in Norman. as the Oklahoma defense really completely controlled the Pokes offense the entire game. The Cowboys couldn’t run the ball and their two quarterbacks were running for their lives constantly.

This was a truly impressive, statement win for the Sooners. This is a different team than what we saw earlier in the year. 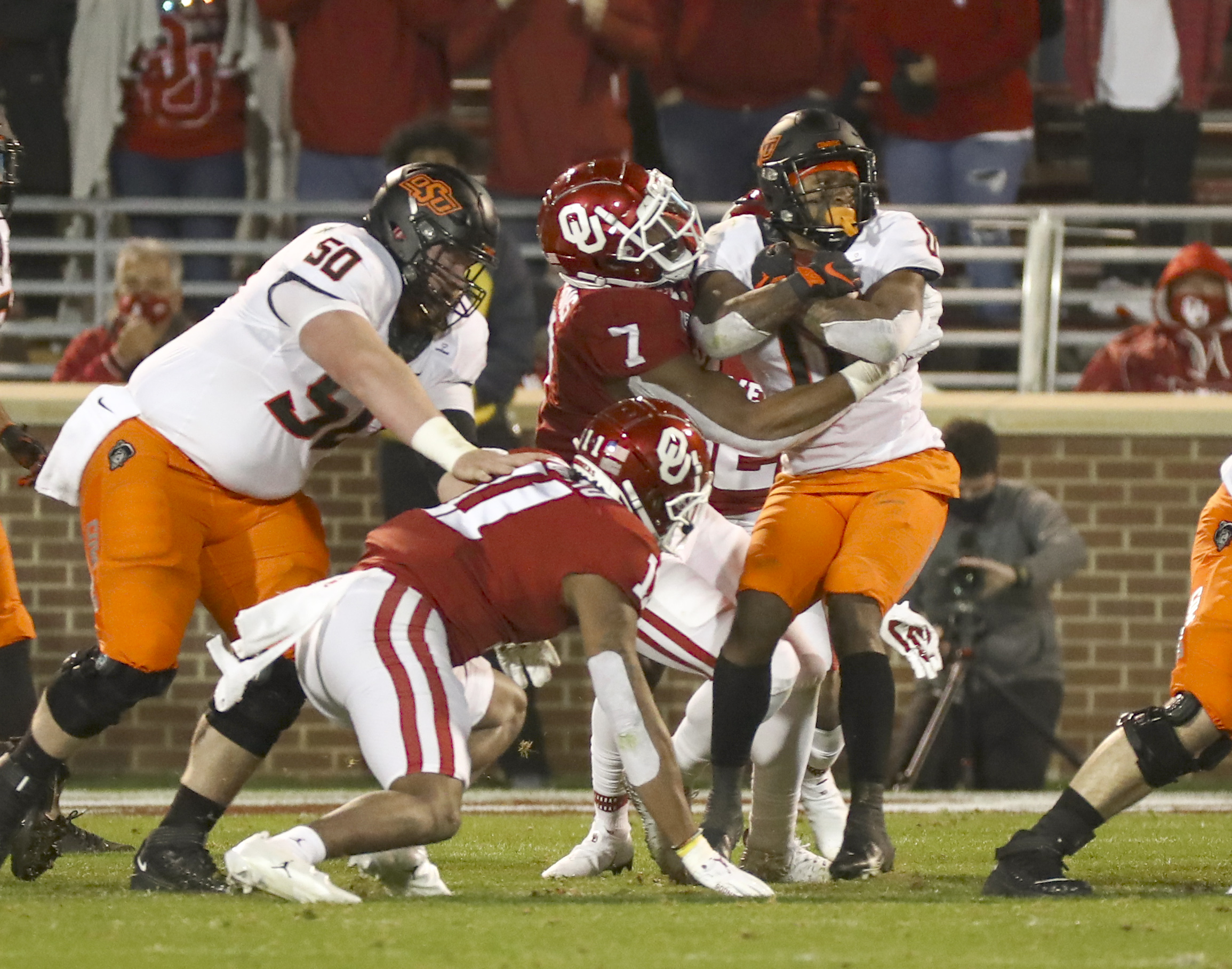 The Oklahoma State offense has not been the best this season largely because of their majorly struggling offensive line. Still, the Oklahoma defense brought it in this game.

The Cowboys ran for just under three yards per carry on the night and their quarterbacks, whether that was Spencer Sanders or Shane Illingworth, were running for their lives all game long.

Ronnie Perkins was absolutely everywhere and the defensive line in general simply was wreaking havoc on the Pokes offense. Chuba Hubbard and Tylan Wallace had minimal impact as well – which is how you know the Oklahoma State offense had a rough night.

I can’t remember the last time you could really say the Sooner defense went out and won them a game, but you could definitely argue they did tonight. 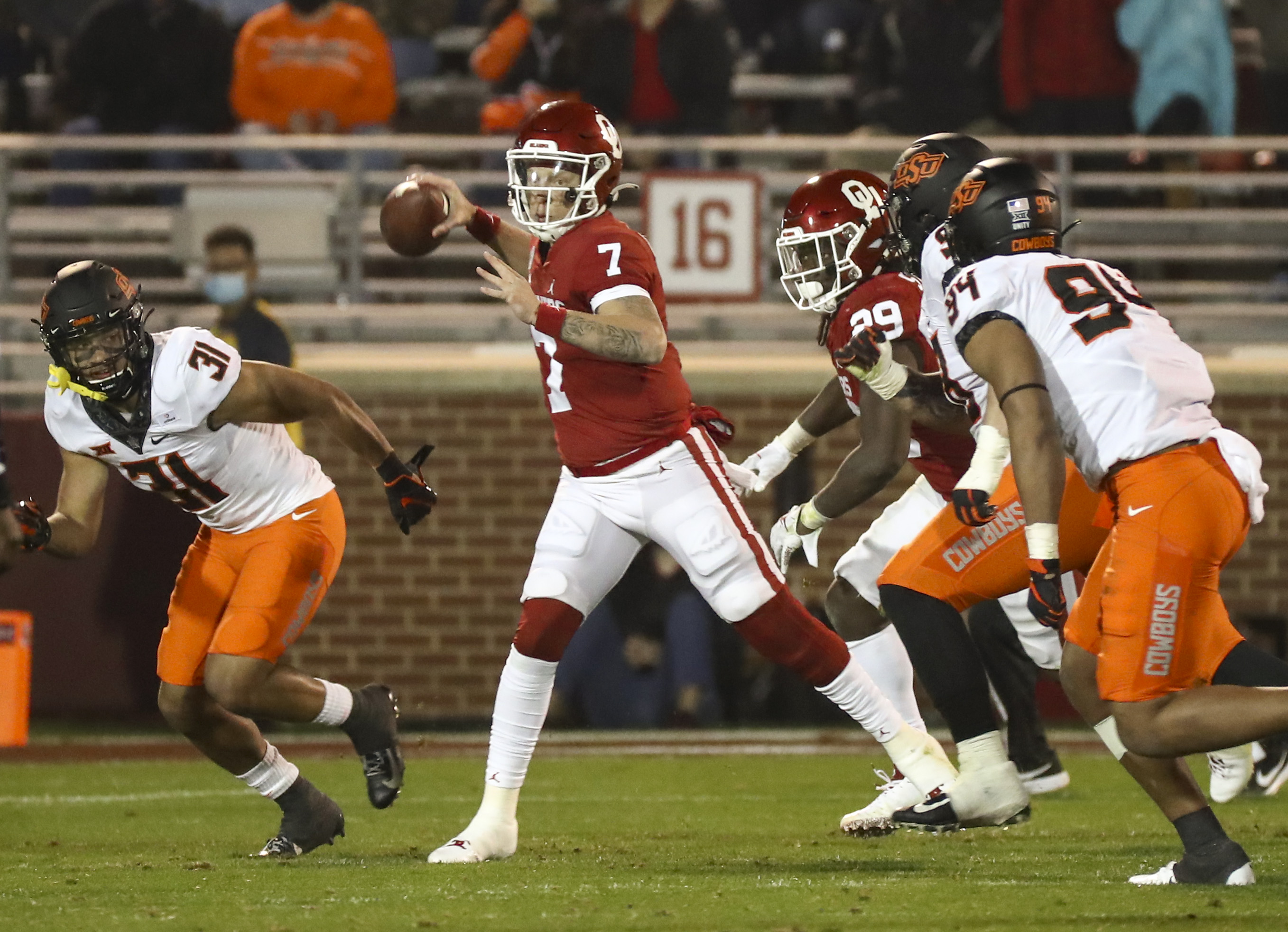 I’ll admit, I thought there was a good chance that the Oklahoma State defense would force Spencer Rattler into some turnovers and mistakes in this game.

I still picked the Sooners to win, and thought Rattler would make plays, but I felt mishaps were inevitable. I was wrong.

Rattler was fantastic in this game, throwing four touchdowns and having ZERO interceptions. Pair that again with Rhamondre Stevenson continuing to feast and the offense was really solid tonight.

They hit a bit of a lull after a lightning quick start, but they were able to ice the game in the fourth quarter with some of their best drives of the season.

If Rattler throws for 300+ yards while not turning it over and Stevenson runs for over 100 yards himself – Oklahoma will not lose.

They were sensational, and never gave the Pokes life tonight.

Mike Gundy did some weird things 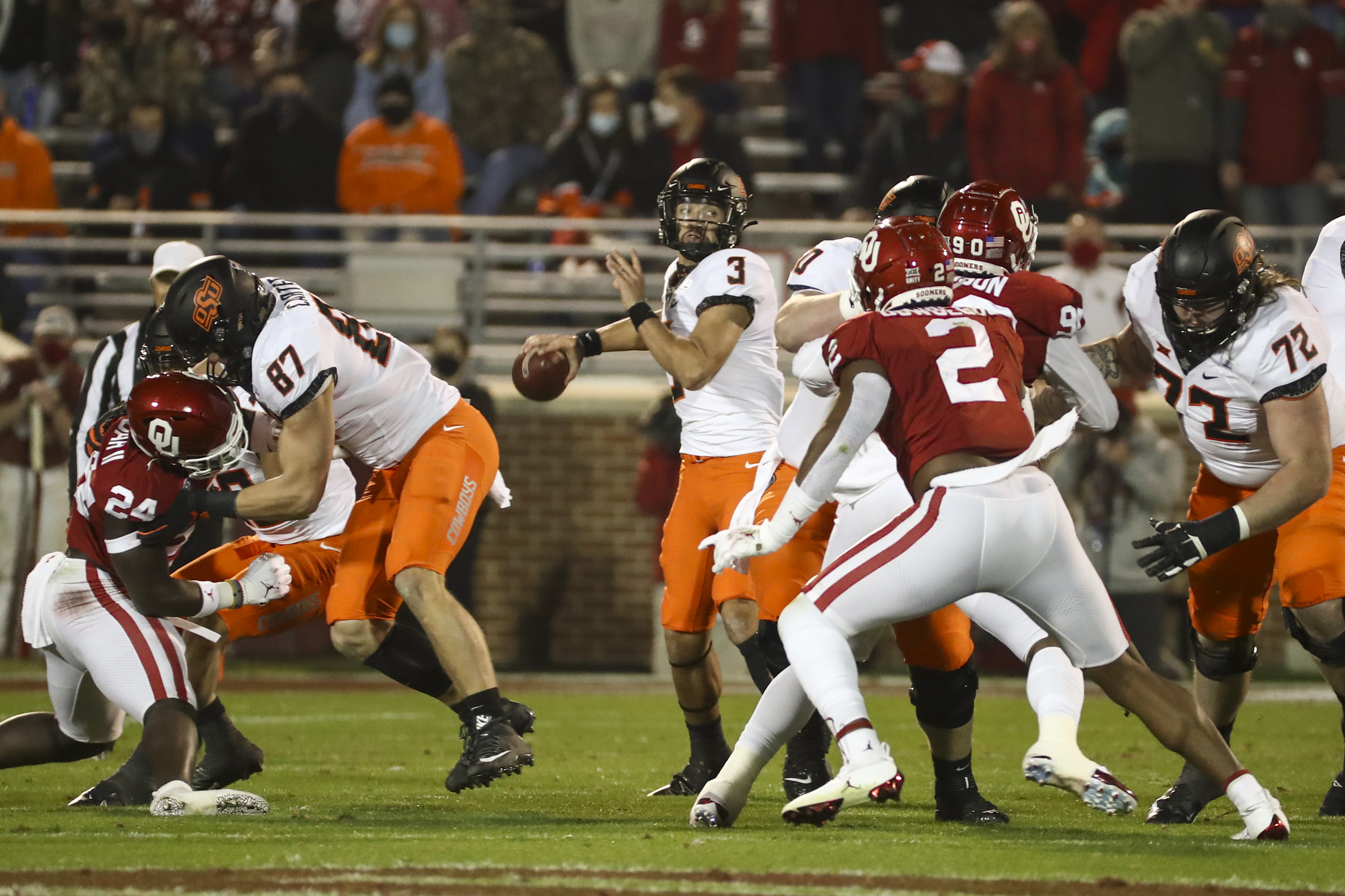 Oklahoma was simply a much better team in this game – but Mike Gundy did some weird stuff in this game. Most notably, the inexplicable decision to leave Spencer Sanders out of the game for as long as he did.

Sanders left the game after an apparent injury in the opening quarter and was replaced by Shane Illingworth. Illingworth would go on to play the bulk of the game with very little success, completing just five of his 21 passes.

Then, in the fourth quarter, Sanders returned to action. At some point, he was cleared to return and Mike Gundy elected to not bring him back in for reasons I can’t explain. Sanders didn’t play well tonight either, but he certainly gave them a better shot than Illingworth did.

Then, in another baffling move, down 34-13 in the fourth quarter Gundy elected to punt the ball on fourth down inside the Oklahoma 40-yard line. He did pin the Sooners down at the one…but they then drove 99 yards to ice the game. That punt made no sense.

Gundy continues to shrink in the big games – namely against Oklahoma. He had some head-scratching moves tonight.