CBSSports.com
Share on FacebookShare Share on TwitterTweet
Texas stormed back in the second half but failed to finish the job as Oklahoma got back into the win column 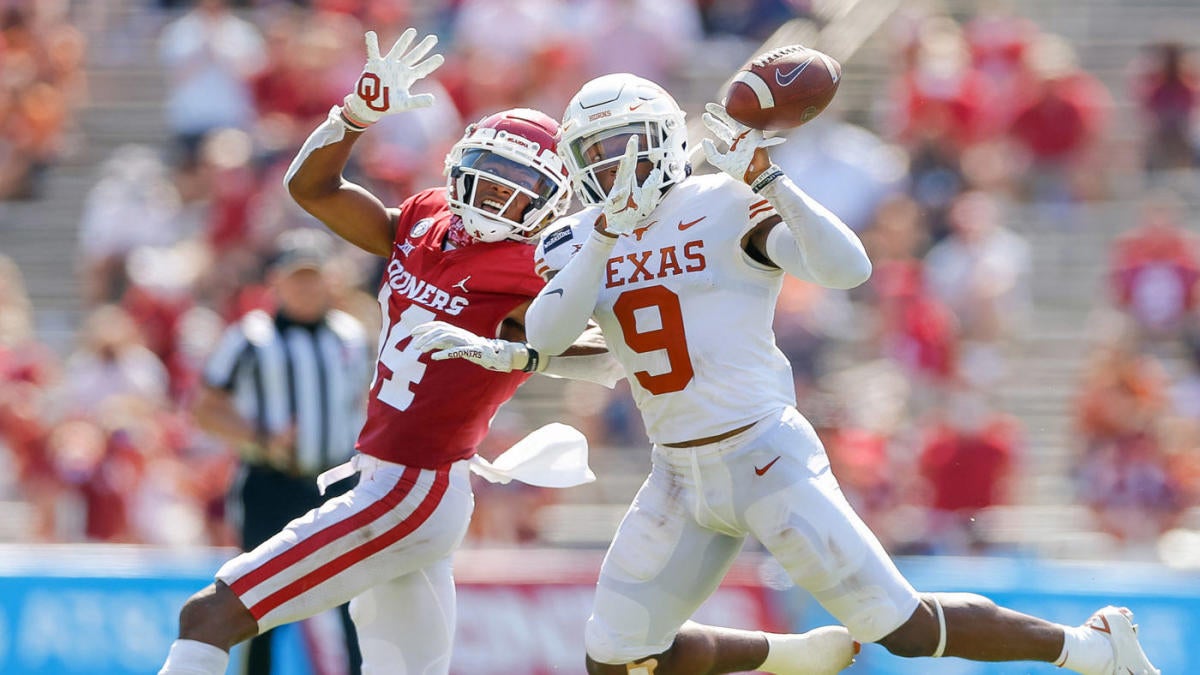 The annual Red River Showdown in the Cotton Bowl between No. 22 Texas and Oklahoma had a must-win undertone for both teams as neither the Longhorns nor the Sooners can afford to get too far behind in the race for the Big 12 Championship Game. That sense of urgency took center stage as the Sooners survived yet another fourth-quarter collapse to outlast the Longhorns 53-45 in four overtimes.

In a wild game featuring several momentum swings, the Sooners found themselves leaning on two things they haven't been able to before: the ground game and the pass rush. Oklahoma hit 208 yards on the ground, mostly from TJ Pledger, who hit 131 yards and two touchdowns in a career day. Marcus Major and Spencer Rattler also contributed with 43 and 51 yards, respectively, along with a pair of touchdowns.

The ground game has been hit or miss in most of the early part of the season, and with Seth McGowan (concussion protocol) out for the game, it was up to Pledger, Major and Rattler to pick up the slack. By the third and fourth quarters, Oklahoma was hoping to grind out a victory.

Rattler overcame his worst 30 minutes of football in his young career to finish with 209 yards passing and three touchdowns. He had two turnovers in the first half, resulting in coach Lincoln Riley making a switch to Tanner Mordecai. By the start of the second half, though, Rattler was back on the field playing smarter, more confident football.

Oklahoma also got to Texas quarterback Sam Ehlinger a lot for the second straight year, notching six sacks and seven quarterback hurries. The Achilles heel for the Sooners, though, has been the fourth quarter. Leading by two scores with under five minutes to play, Oklahoma allowed two quick scores as the Longhorns tied things up with 14 seconds remaining.

Both teams exchanged touchdowns in the first two overtimes, but a pair of missed field goals in the third overtime kept the game going. Rattler then hit Drake Stoops for a 25-yard touchdown in the fourth overtime and Tre Brown intercepted Ehllinger's pass on the next possession to give his team the win.

Oklahoma avoids going 0-3 in the Big 12, which last happened in 1998. Texas has now lost five of its last six against the Sooners. Here's what else we learned from Saturday's crazy finish.

Oklahoma won by running the ball

One of the concerning deficiencies of Oklahoma's offense over its last two losses is that the running game has been lacking. Heading into Saturday, Oklahoma was averaging 3.6 yards per rush with three touchdowns. To put that into context, Oklahoma led the Big 12 in rushing in each of the last three years while averaging 5-6 yards per carry. Some of the dropoff was explainable: Kennedy Brooks opted out, Trey Sermon transferred, Jalen Hurts was gone, and Rhamondre Stevenson was suspended. Oklahoma still has plenty of talent at running back, it just wasn't getting the push from the offensive line.

That changed against Texas. With McGowan out, the Sooners did a great job handling more responsibility. Major and Rattler also stepped up. Granted, it got to the point for a while in the second half where Oklahoma was relying a lot on the run and Rattler almost wasn't even a threat passing the ball. That changed in overtime when Rattler fired off some impressive touchdown throws. But on a day when there weren't many big plays down the field, the run game made a huge impact.

The Sooners are allergic to fourth quarters

The one thing we can say about Oklahoma through four games is this team doesn't know how to finish down the stretch. A strong defensive effort will get overshadowed by yet another late collapse and the points on the scoreboard. Oklahoma actually played really tight defense and got in the backfield for three and a half quarters. Maybe they were gassed, or maybe they let off the gas too soon. In any case, Texas scored two touchdowns in the final five minutes of the fourth quarter. Since starting Big 12 play, Oklahoma has been outscored 45-10 in the fourth quarter. That isn't a sustainable way to play.

Texas can't get out of its own way

The Longhorns are not without their problems, either. The recurring theme for Texas in 2020 has been mistake-prone football. The errors are often unforced and they show up in just about every conceivable way. The penalties were bad again: 11 for 101 yards. Among them were a couple of costly personal fouls, one of which took what would have been a fourth-and-1 from the OU 2-yard line and moved it back to a fourth-and-16. Another, an unsportsmanlike penalty on an Oklahoma punt return, set the Sooners up in good position to score on a short field.

The turnovers were just as costly. For as great as Ehlinger played, he had two interceptions, including the one that sealed the game. Keaontay Ingram also had another fumble. The blocked field goal in the third overtime was just the latest special teams miscue for this program. Neither team was clean, but Texas' mistakes ended up being a little more costly.

The 'Horns couldn't run the ball

Oh, sure, Ehlinger was great in that department. He had 112 yards on 23 carries, but that also takes into account both scrambles and sacks. Texas running backs had 11 carries for 29 yards -- that's 2.6 yards per rush. Running was an issue against TCU in Week 5, at least for the first half, and Saturday wasn't much better. Ehlinger definitely played hero bringing his team back late, but part of the reason why Texas was behind in the first place was because it was losing in the trenches on most standard downs.