Crimson And Cream Machine
Share on FacebookShare Share on TwitterTweet
Spencer Rattler and Marvin Mims give OU all the offense necessary to pound the Horned Frogs in road victory. 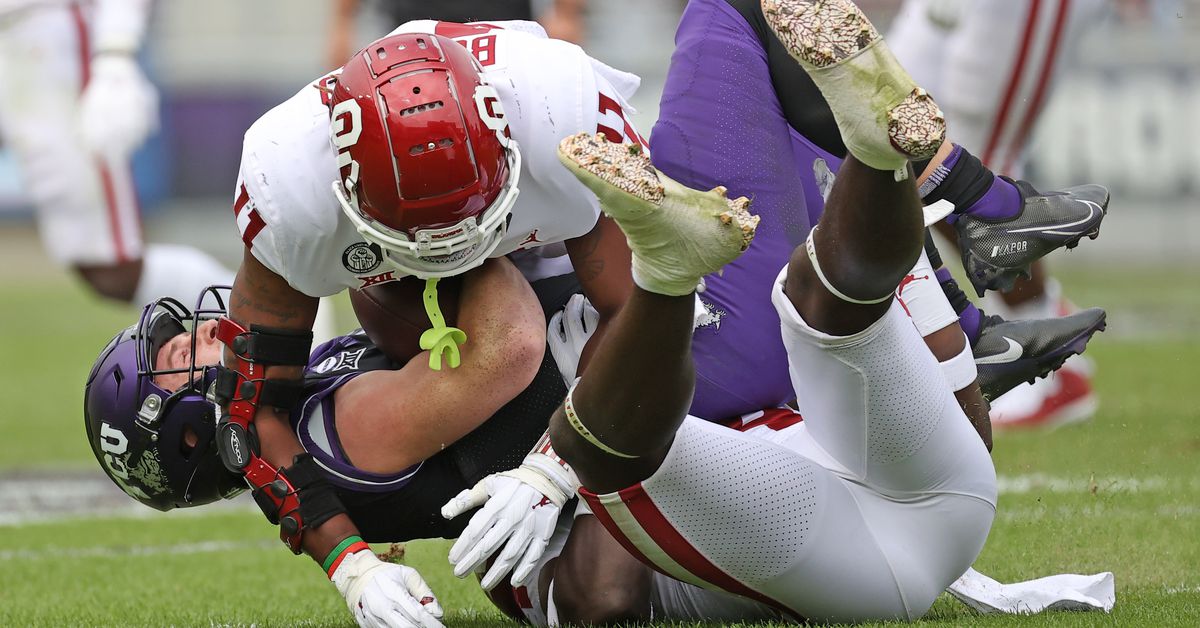 You haven’t heard this very often lately: The Oklahoma Sooners won with defense on Saturday.

OU put the clamps on the TCU Horned Frogs in a 33-14 win that saw OU give up just one touchdown before the waning moments of the game. The victory ran OU’s record to 2-2 in Big 12 play and 3-2 overall.

“Boom or bust” might be the best way to describe the performance of the OU offense. Redshirt freshman QB Spencer Rattler frequently tested the TCU secondary down the field, hitting enough deep shots to give the OU defense ample breathing room. Rattler completed 13-of-22 attempts for 332 yards and two touchdowns, which works out to a staggering 25.5 yards per completion.

Promising freshman receiver Marvin Mims had a spectacular day, hauling in four catches for 132 yards and two TDs. The two scores covered 50 and 61 yards. Mims added a 38-yard punt return late in the game to help the Sooners seal the win.

Additionally, sophomore wideout Theo Wease continued to emerge as a go-to target on money downs. He finished the game with three receptions for 87.

While the Sooners were getting vertical in the passing game, running back T.J. Pledger plugged away on the ground. Pledger knocked out 122 rushing yards and a touchdown on 22 attempts. Pledger’s partner in the RB rotation, freshman Seth McGowan, ran for 41 yards on 11 carries, but he also had one reception for 43 yards.

Brkic’s big day did offer a warning about the Sooners’ tendency to bog down in the red zone. Three drives stalled out once OU got inside the TCU 20 yard line. More consistency in the running game would probably help in that regard – even after adjusting for sacks, OU pounded out just 3.9 yards per attempt on the ground.

With the Sooners approaching the back half of league play, their hopes for a sixth consecutive Big 12 championship remain in play. Next week, they will travel to Lubbock for a Halloween night game versus the Texas Tech Red Raiders.