Daily Northwestern
Share on FacebookShare Share on TwitterTweet
Football Northwestern had an excellent start to the game, holding Wisconsin to zero yards on its first possession and quickly driving down the field for a score. But Graham Mertz and the Badgers offense quickly bounced back with seven-yards on a quarterba 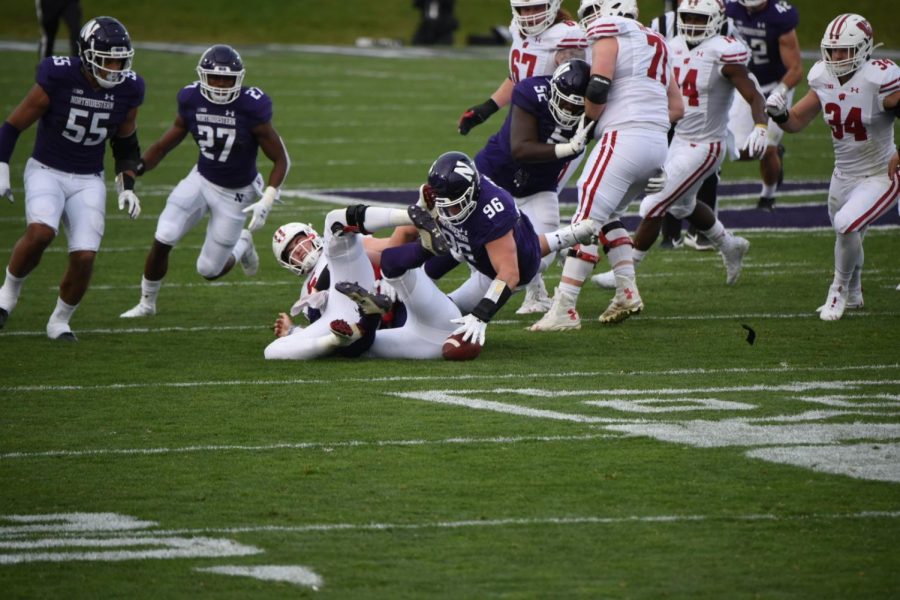 Northwestern had an excellent start to the game, holding Wisconsin to zero yards on its first possession and quickly driving down the field for a score. But Graham Mertz and the Badgers offense quickly bounced back with seven-yards on a quarterback scramble and a 10-yard pass to wide receiver Jack Dunn.

That’s when the Wildcats imposed their will. Senior linebacker Paddy Fisher hit Wisconsin running back Garret Groshek hard as he took off with the football, knocking it loose and ripe for the picking. Senior linebacker Blake Gallagher scooped it up to end a promising drive and send the Cats’ offense onto the field.

The two senior leaders came up big again late in the first quarter with the Cats and Badgers tied at seven apiece. With Mertz scrambling and his offense near the red zone, a hard hit by Gallagher knocked the ball loose; it was picked up by junior defensive lineman Trevor Kent.

Coach Pat Fitzgerald said it before the game: When Northwestern plays Wisconsin, the team that wins the turnover battle usually wins the game. NU had five — three interceptions and two fumbles — which stymied a Wisconsin offense that had scored 94 points in its first two games of the season. The Badgers’ five turnovers were their most in a game since 2015.

In 2019, the Cats recorded just 17 takeaways in 12 games. Every week, Fitzgerald would lament his defense’s inability to create turnovers, saying it was on par with the offense’s lack of execution.

Through five games this year, they’ve already got 15 takeaways, including 11 interceptions. Seven different NU players have joined the Pick Club, led by sophomore Brandon Joseph, who has five.

Joseph had two of them today. On consecutive Wisconsin drives, Joseph capitalized on Mertz’s mistakes and found the ball.

“Maybe I should say the other way around,” Fitzgerald said. “The ball has found him.”

His second helped Northwestern put points on the board. With the teams tied at seven with five minutes left in the second quarter, Mertz’s pass to Hayden Rucci tipped off the hands of the wide receiver and into Joseph’s beckoning arms.

The Cats turned that interception into a seven-play drive culminating in a touchdown for Ramaud Chiakhiao-Bowman and a seven point lead.

Greg Newsome’s pick — Mertz’s third of the day — in the middle of the third quarter helped end another promising Wisconsin drive. Newsome followed as the wide receiver he was tailing lost him by moving inside the field before cutting back to the sideline. He recognized the play, diving to catch an underthrown pass from Mertz at the fifty yard-line. And was then mobbed by the closeby NU sideline. It was the first interception of his three-year Northwestern career.

It earned him entry into the Pick Club. It’s the secondary’s answer to the 2015 Sky Team, a way to push the defense into emphasizing interceptions and ball skills. Newsome is the fifth member of the secondary to gain membership this season. Two linebackers have also recorded interceptions.

“It feels good to join the pick club,” said Newsome, who said he had practiced that exact offensive play against Chiakhiao-Bowman in practice. “It’s about damn time.”