The Cut
Share on FacebookShare Share on TwitterTweet
The sure-to-be Gen-Z classic subverts the tropes while paying homage. 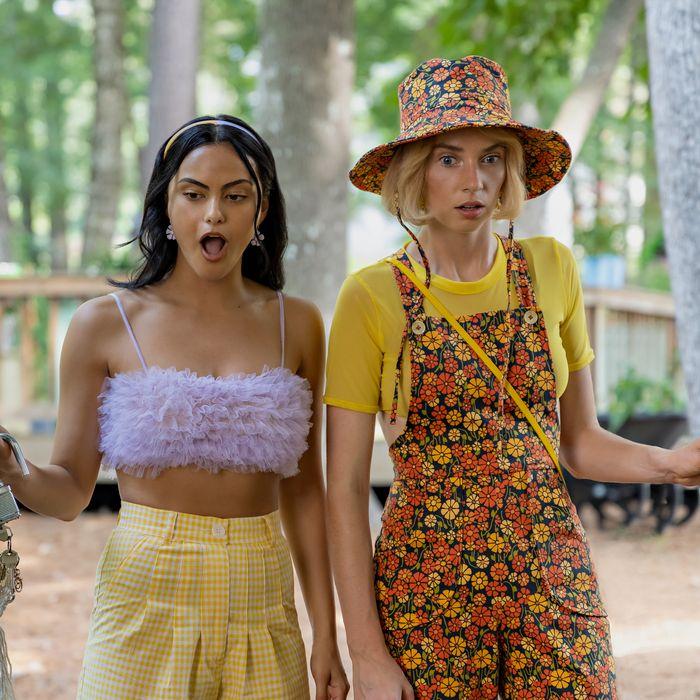 In the teen-movie canon, the revenge film reigns supreme. Watching characters (usually women) take down their high-school enemies — the purest form of petty wish fulfillment — brings a sense of euphoria for the viewer, and rooting for a bad character’s demise without feeling any guilt is a unique cinematic pleasure. But with Do Revenge, a new addition to the teen-revenge genre, comes Gen Z’s answer to the question: What if vengeance is not so black and white?

The premise for Do Revenge, written by Sweet/Vicious duo Jennifer Kaytin Robinson and Celeste Ballard, starts as your typical revenge tale. Drea (Camila Mendes), a driven rising senior at an elite Miami prep school, becomes a social pariah after her rich boyfriend, Max (Austin Abrams), leaks an intimate video. Feeling upset, Drea makes a deal with the new girl in school, Eleanor (Maya Hawke), to exact revenge on those who have wronged them. Eleanor will infiltrate Max’s elite group of popular kids and find dirt on him, while Drea will take down Carissa (Ava Capri), a girl Eleanor says outed her as a tween and spread a rumor that she was a predator. It’s Mean Girls meets Alfred Hitchcock’s Strangers on a Train, with dashes of Heathers and Cruel Intentions thrown in for good measure (and a scene directly inspired by the infamous 10 Things I Hate About You paintball date). But while the film is full of references, it manages to put its own twist on the revenge-teen genre by blurring the line between protagonist and villain.

When co-writing the script and directing the film, Robinson tells the Cut she had one driving question: “What would the choice be in a traditional ’90s movie, and how do we subvert that choice?” In some cases, the answer is simple, like giving Tara (Alisha Boe), the best friend who abandons Drea after the video leak, a real redemption arc. “The idea of someone making a mistake and trying to make amends was really important to me,” Robinson says. “I don’t know that would have existed in a movie that came out in the ’90s or 2000s.”

In Do Revenge, now streaming on Netflix, the subversion is done almost entirely by presenting viewers with a Latina protagonist, a clear shift away from centering white protagonists in the ’90s and ’00s films that influenced Robinson, like Cruel Intentions, Heathers, and Clueless. In Cruel Intentions and Clueless, most of the characters are also extremely rich, which cloaks them in an extra layer of safety. Their actions, for the most part, have no consequences (except for Heathers, which ends with mass death). Drea, on the other hand, was raised by a single mother and is one of the few scholarship students at Rosehill Country Day. Unlike Kathryn Merteuil, Cruel Intentions’ disputed villain, played by Sarah Michelle Gellar, Drea’s financial circumstances are precarious.

Clockwise from the top: Heathers, Cruel Intentions, Clueless, and Do Revenge. Photo-Illustration: by The Cut; Photos: Shutterstock, Netflix

Because of this, Do Revenge can move beyond exploring the archetype of the mean girl who creates chaos just because she can and toward an understanding of the specific type of ruthlessness exhibited by Drea, who doesn’t manipulate people out of boredom but almost out of necessity as a scholarship student in a prep-school world. “The difference between Kathryn and Drea is her empathy and heart,” Robinson explains. “Drea shoves it down because she feels like that’s stopping her from succeeding and she snuffs out the part of her that is a more empathetic, vulnerable person.”

However, Drea’s class status isn’t always legible to those around her. She dresses just as well as, if not better than, her classmates, and she knows how to navigate the world of the elite so well, she has practically become one of them. But for Robinson, it was always important that Drea would not have the same level of comfort and safety as her peers. “The story could be told with a white person at the center, but it’s not as interesting to me,” she explains, adding, “It wasn’t a coincidence that the three people [taken down by Drea and Eleanor] — Erica, Carissa, and Max — are all white people.” It would have been easy for Robinson to place a non-white protagonist at the center of Do Revenge, ignore the necessity of code switching or feelings of discomfort among elites, and still get credit for adding diversity to her film. Instead, she committed to considering how Drea’s ethnic identity would impact her life, her future, and her opportunities, which inherently changes how Do Revenge resolves the revenge arc.

Spoiler ahead: About three-fourths of the way through the film, we learn that Drea is not just a victim, she is also a villain. Turns out, it was Drea who outed Eleanor all those years ago, and their entire friendship up until this point was part of another elaborate revenge plot. With that one reveal, Drea should go from being the girl you root for to the one you root against. But by then, the audience has identified with Drea. We cheered her on when she had Carissa expelled for growing drugs on campus, and laughed when she framed Erica, another mean girl, played by Sophie Turner, for cocaine possession at tennis camp. Not only do we like her, we also feel sympathy for her. Because Drea is Latina and a scholarship student, the audience knows the consequences for her could be devastating, and now we’re faced with a dilemma: Have we been rooting for the villain this entire time? Are these revenge plots actually fair? Does Drea deserve to be destroyed for what she did?

Jennifer Kaytin Robinson and Camila Mendes on the set of Do Revenge. Photo: Kim Simms/Netflix

Faced with the possibility that Eleanor will destroy Drea for what she’s done, suddenly the fantastical revenge plots feel overwhelming and downright terrifying. It’s one thing to laugh at Erica, a rich white girl who throws an over-the-top fit as she’s being carted away to a posh rehab center. It’s another to watch Eleanor threaten to take a page out of Drea’s book and get her mom fired by planting drugs on her.

“I want everyone to have a different feeling of when the characters were right and when they were wrong,” Robinson says of the twist. The trick is getting the audience to question their complicity in rooting for the downfall of certain characters, while leaving room for the satisfaction that comes with watching mean characters suffer — the entire reason the revenge genre works in the first place.

The tone in Do Revenge shifts depending on who is punished. “Being framed for having cocaine and having your life destroyed is definitely horrible,” Robinson admits. “But the thing about this movie that is so fun is that it doesn’t live in reality, so you get to play by different rules.” Robinson describes Erica’s storyline as “heightened camp fun,” adding that she tried to create a “sliding scale” of real stakes when it comes to the consequences of the revenge plots. But even as the film benefits from the intoxicating delight of vengeance, it subverts the genre in its final act. Do Revenge ends with Drea and Eleanor planning one final attack on the popular elite, including Max, who, thanks to his white-male privilege, has managed to dodge all consequences.

In the end, they don’t even have to execute their plan to get revenge on Max. He sinks himself by admitting to his role in leaking the tape and ruining Drea’s life on a live video feed. His acceptance into Yale is revoked, and all of his friends abandon him, so he does pay for what he did, but it’s not extreme. (No unwarranted trips to rehab for him!) “It was a conscious choice to not go past the public humiliation, which mirrors what he did to Drea,” Robinson says, making clear that any “bigger consequences” wouldn’t serve the story she wanted to tell. Yes, it is a revenge film, but it’s also an indictment of the very concept. “Everyone in this movie is the hero and everyone is the villain,” Robinson explains. Do Revenge asks the audience to face their complicity in wanting characters to get revenge, and question their complacency in accepting who is deserving of harm just because the protagonist says so — a paradox that resets the genre for the next generation.

Get the Cut newsletter delivered daily