A partnership made in the MAGAverse: Matt Gaetz and Marjorie Taylor Greene team up to battle political opposition

CNN
Share on FacebookShare Share on TwitterTweet
Republican Reps. Marjorie Taylor Greene of Georgia and Matt Gaetz of Florida have a lot in common. As each lawmaker increasingly finds themselves at the center of controversy, they often go out of their way to show public support for each other, raising c 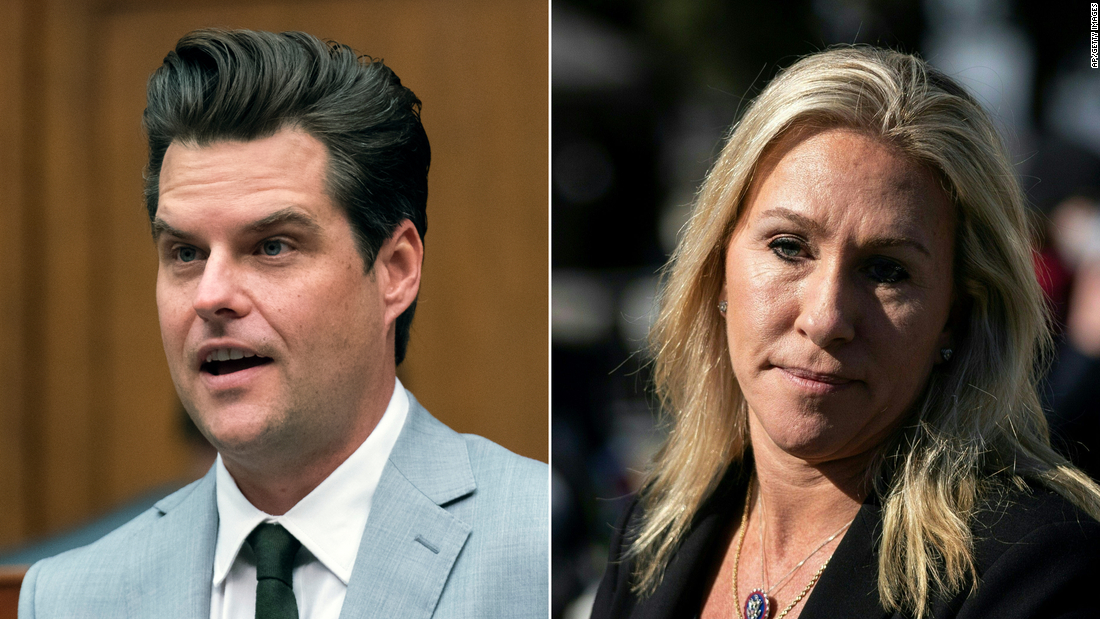 They've now formed a joint fundraising committee and are making plans to travel the country together on what they are calling an "America First" tour.
The pair were early and passionate supporters of former President Donald Trump, and they have no problem challenging the establishment leaders within their own party. As the pressure on each grows, they have formed an unsurprising bond, often seen talking to each other on the floor of the House of Representatives, and they back each other up when others in the GOP aren't rushing to their defense.
Earlier this month, when Greene flirted with the idea of forming an "America First" caucus, a leaked flier promoting the caucus received sharp criticism for using inflammatory rhetoric. While many Republicans -- even some from the far-right Freedom Caucus -- were quick to distance themselves from the document and the caucus itself, Gaetz proudly proclaimed he was ready to sign up. Plans for the caucus were eventually scrapped after blowback from leadership.
Greene has returned the favor. When news broke of a federal investigation into Gaetz, which includes allegations of sex trafficking and prostitution, many Democrats and even fellow GOP Rep. Adam Kinzinger of Illinois called for him to resign. But Greene defended her Florida colleague.
"I have proudly defended Matt Gaetz from the beginning because I know he has done nothing wrong and I recognized this playbook right from the start," Greene tweeted.
Now the two are solidifying that alliance through the joint fundraising committee -- which generally allows politicians to secure a single, larger check from a donor and then split the money among several committees -- and their "America First" tour, which is set to kick off next Friday with an event at the Villages, a retirement community that is in neither of their congressional districts.
"There are millions of Americans who need to know they still have advocates in Washington D.C., and the America First movement is consistently growing and fighting," Gaetz said in a statement announcing the tour. Gaetz's and Greene's offices did not respond to interviews request from CNN.
And while the duo continues to draw attention to themselves, some of their GOP colleagues in Washington are worried their side show is a distraction from Republicans hoping to regain power in the House next year.
"I think these people get too much attention. I don't really want to elevate or amplify their voices. They're not the Republican Party that I am excited to be a leader within," one Republican lawmaker, speaking on the condition of anonymity to speak more freely, told CNN. "For me, it'd be better if these guys just go away."
But more than just soak up the spotlight, the pair raises questions about the future of the Republican party, and more importantly who the face of it is.
"This is part of the Republican Party's internal struggle about, you know, is this the party of Trump or is this the party of conservative values? And you know, Matt Gaetz and Marjorie Taylor Greene are many things, but you know, conservative Republicans they are not," the lawmaker said.
These members going away -- at least in the short term -- seems unlikely. Despite calls for him to step down, Gaetz has vowed that he will not resign and instead has stepped up his fundraising efforts. He has denied all wrongdoing and has not been charged with any crimes.
Greene has also become a fundraising force, despite being kicked off her congressional committees. The Democratic-controlled House voted to remove her in February in the wake of recently unearthed incendiary and violent past statements from the congresswoman that triggered widespread backlash. But the freshman raised an unprecedented $3.2 million in the first quarter of 2021, which largely came from an online spigot of small-dollar donations from people across the country.
Some Democrats have called on Gaetz to be removed from his committees as well because of his legal troubles. But House Minority Leader Kevin McCarthy has taken a neutral position on Gaetz and his future, saying that he will allow the investigation to play itself out.
"I spoke with Mr. Gaetz about the accusations," McCarthy said shortly after the investigation was revealed. "He's told me he's innocent of the accusations. I explained to Mr. Gaetz the rules inside our conference. If there was something to come forward we'd take action."
Some Republicans fear that the more the pair are under attack, the stronger their base of support becomes. A separate GOP member of Congress argued that removing Greene from her committees left her only one option: waging a public relations war.
"I tell the Democrats, who ask me what we are going to do about MTG, that this situation is one of their own creation," the Republican lawmaker told CNN.
But other Republicans believe this partnership between the Georgia and Florida Republicans could end up doing greater long-term damage to a party struggling to rebuild after failing to retake the House in 2020 and losing the White House and the Senate.
"It's obviously a bad look for the party. This is not who we are. This is not how we get the majority back. It's a distraction that's only going to hurt our efforts to talk about our agenda and talk about policy," said a GOP congressional aide.
Similar shots
Topics of the week
Father's Day 2021 Nets Ben Simmons Amazon Prime Day Suns Juneteenth Devin Booker U.S. Open Carl Nassib Severe Thunderstorm Warning
Hot topics