The Philadelphia Inquirer
Share on FacebookShare Share on TwitterTweet
The rookie is the fourth player in Phillies history to end a game with his first career homer. “It’s every parent’s dream to be able to see your kid do something like that,” his father, Mark, said. 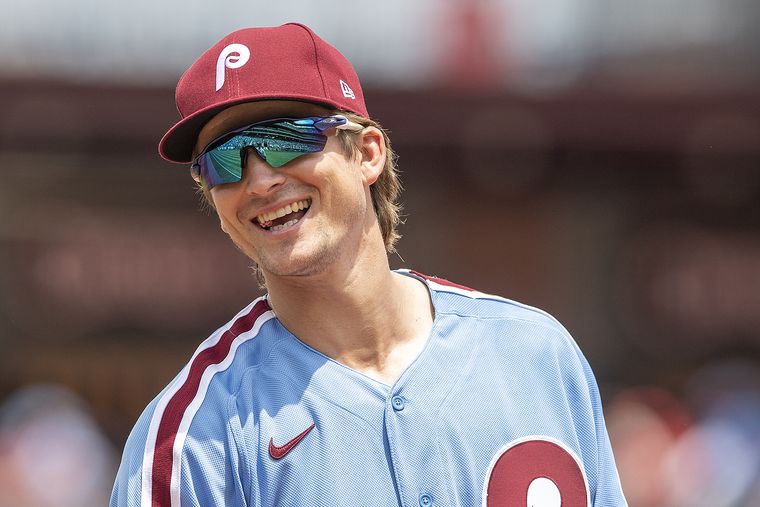 At the start of Wednesday night’s game, Luke Williams was the most anonymous player in the Phillies’ lineup. By lunchtime Thursday, his name had become the newest chant at Citizens Bank Park.

Williams gave rise to the concept of an “overnight sensation” by hitting a walk-off home run in his first major-league start one day after getting called up by the Phillies and four after helping Team USA clinch a berth in the Olympics. Never mind that he hit 23 homers in 458 minor-league games. He’s the fourth player in the Phillies’ 139-year history to end a game with his first career homer, joining David Doster in 1996, Rick Joseph in 1967, and John Peters in 1921.

And if the whole thing seems a little too good to be true, well, imagine how Williams’ parents, sister, and younger brother feel.

“It’s indescribable. Amazing,” Mark Williams, Luke’s father, said Thursday before watching the Phillies wrap up a three-game series against the Atlanta Braves with Luke back in the lineup at third base. “Hopefully he gets to stay with the team and help the team out for a good amount of time.”

The Williams family has been on this baseball odyssey with Luke for more than a week.

They were with him in Port St. Lucie, Fla., where he went 8-for-18 with a homer in four games for Team USA. No sooner did they arrive home Sunday — Mark and Jeannine on a 6 a.m. flight from Fort Lauderdale to Los Angeles; sister Sami to Des Moines, where she just graduated from Iowa State; brother Ike to Utah, where he’s attending college — did Luke call with the news that the Phillies were calling him up.

“The next day we got the call saying, ‘Hey, can you be on a plane Tuesday?’ ” said Mark Williams, who hopped the first flight out of L.A. with Jeannine on Tuesday morning. “We’re like, ‘Absolutely. We wouldn’t miss it for anything.’ It’s just exciting.”

They were all here, then, (minus Luke’s older brother, Jacob, who was in Mexico) for Luke’s debut Tuesday night, a pinch-hit at-bat in which he singled on a drag bunt and kept going all the way to third on a two-base error by Braves pitcher Drew Smyly. Williams, who plays eight positions, got the start in center field Wednesday night and doubled in the fourth inning.

And that would’ve been enough to make the whole trip worthwhile. But Williams, who turned down a scholarship offer from Cal Poly to sign with the Phillies after being drafted in the third round in 2015, hit the first walk-off homer he could remember since a travel tournament before his senior year at Dana Point (Calif.) High.

But this homer must have topped that one, right?

The Williamses were outfitted Thursday in jerseys that Luke collected over the years. Mark wore a road Phillies gray uniform, while Sami — a first-team All-American softball infielder after helping Iowa State to the NCAA Tournament — wore a red spring-training shirt with Williams’ Grapefruit League No. 85 on the back.

They were all on the field after the home run Wednesday night as Luke conducted live interviews and got doused with ice water by teammates after the Phillies’ most rousing victory since Bryce Harper’s walk-off grand slam in 2019. Phillies pitcher Zach Eflin called Williams “Captain America.”

“I think that’s every dad’s dream, right?” Mark Williams said. “It’s every parent’s dream to be able to see your kid do something like that.”

The journey will continue next week, too. With the Phillies headed on the road for a three-game series at Dodger Stadium, Mark and Jeannine Williams will be there. They wouldn’t miss it.

“I get very emotional,” Jeannine said. “But I’m just so proud of him. He has worked so hard.”