Sporting News
Share on FacebookShare Share on TwitterTweet
Liverpool have sealed their place in the Champions League final with a brilliant late fightback against Villarreal to win 3-2 on the night in Spain. 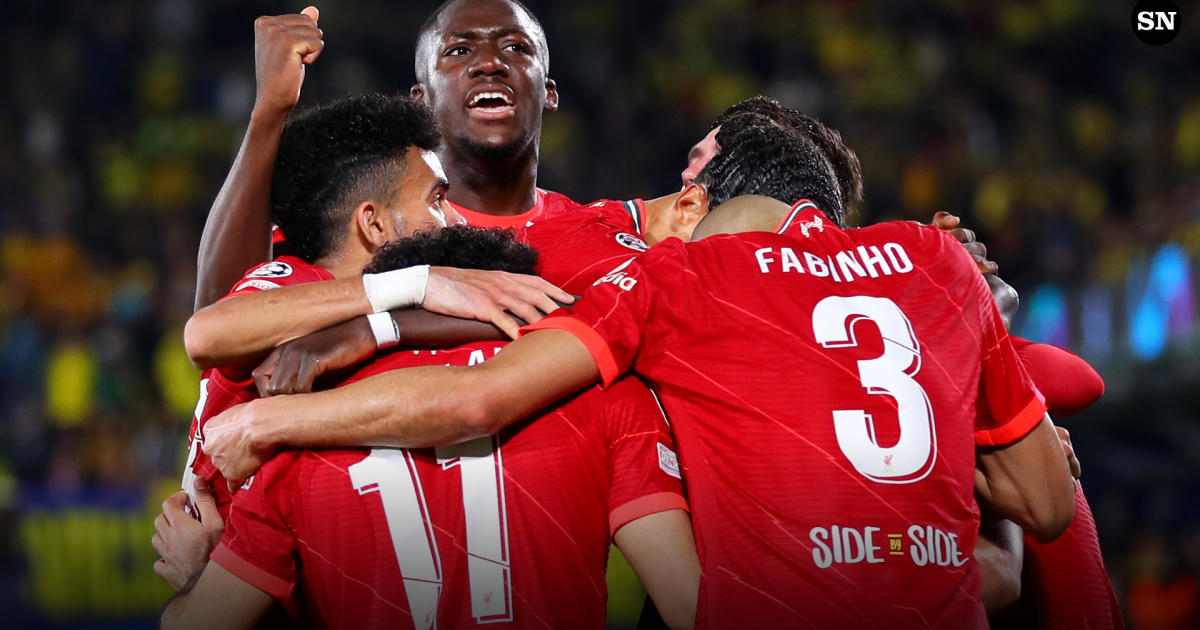 Liverpool are through to a third Champions League final in five seasons after an incredible 5-2 aggregate semi-final win over Villarreal.

Jurgen Klopp's side surrendered their two-goal first-leg advantage in a disjointed first-half display in Castellon, as goals from Boulaye Dia and Francis Coquelin threatened to cause an iconic upset.

However, the half-time introduction of Luis Diaz turned the tide for Liverpool, as the Colombian headed them level on the night, following Fabinho's close-range finish.

The visitors showed their ruthlessness late on, as Sadio Mane pounced on Geronimo Rulli's error to slot home a third goal, before Etienne Capoue was dismissed for a second booking in the final minutes.

With Liverpool's 2022 quadruple dreams in danger of ending in bizarre fashion in Castellon, Klopp once again turned to his substitutes bench on a big European night.

The second-half introductions of Diaz and Roberto Firmino against Inter Milan in the last 16 saw the Reds over the line at the San Siro, and the Colombia international proved his worth again tonight.

Klopp is attempting to balance Diaz against Diogo Jota within his starting front three, but Diaz's immediate impact since signing in January is quickly moving him up the pecking order.

Liverpool in the first half vs Villarreal:

The first 25 minutes of the second half:

His pace and directness instantly unsettled Villarreal's set-up after the break, with spaces that did not exist in the first 45 minutes opening up.

Another crucial goal, to level the game on the night, demonstrates his consistency in key moments, and he looks to nail down a starting spot in Paris later this month.

Diaz's introduction helped to imbalance Villarreal's rigid defence but the adaptability of Mane underlined how important Liverpool's No.10 is to Klopp.

He rotated with Jota between a wide left and a central position before break, but Diaz's energy is best utilised out wide, and Mane moved into the middle.

The former Southampton man has made the position his own in recent weeks, with Diaz starting more games, and Mo Salah settled on the right.

But, Mane's intelligence both on and off the ball makes him a perfect operator to drop deep and link with the midfield, while springing in behind with greater impetus than Jota or Firmino.

A outstanding player across the front line, Mane's seamless switch to a "false nine" has unlocked another level to his game, and allows Diaz and Salah to flourish even more.

???? One last road trip to Paris to tick off for the Reds. #VILLIV | #YNWA pic.twitter.com/WU5JI3vODg

The narrative of the night will be dominated by Liverpool's fightback to write another chapter in their European legacy.

However, the meticulous Klopp will be concerned by their listless first-half display, with Villarreal unlucky not to be ahead by more than two goals.

Crosses into the box have been an issue at times for the Liverpool defence this season, with Trent Alexander-Arnold well beaten by Coquelin, as Villarreal smelt blood.

Villarreal's goals were not borne out of Liverpool errors, but a lack of cohesion and intensity right the way through the team on the night.

Even within their gruelling schedule, Liverpool have maintained their reputation for smothering opposition teams early on, but the ferocity of Villarreal's early play disrupted their flow, and it is an issue for Klopp to address ahead of two finals this month.

FULL-TIME: An incredible night at the Estadio de la Ceramica!

A game of two halves in Castellon as Liverpool produced a dominant second half performance to break Villarreal hearts on the night. Boulaye Dia and Francis Coquelin's early goals set the stage for a potential shock but the Reds were ruthless in the second half, as Fabinho, Luis Diaz and Sadio Mane completely turned the tie around to seal their place in the final.

88th Min: Liverpool break and look for a fourth on the night but Salah gets his feet in a tangle and Villarreal clear their lines.

Liverpool substitute Curtis Jones zips away from Capoue and the former Spurs midfielder brings him down. A second booking and the Frenchman is sent off!!!

Villarreal will end the game with ten men.

From 2-0 down to 3-2 in front on the night...........and 5-2 on aggregate!!!!! Keita's long ball forward frees Mane in behind and Rulli makes a mess of his clearance to let the Senegalese star to roll home a fifth aggregate goal!!!

Back in full control of this tie! ????#UCL pic.twitter.com/dlKwB2yvPm

Mane passes the ball into an empty net after rounding Gerónimo Rulli! ⚽️

Liverpool have turned this around with such ease in the second half!

Three goals in the space of 12 minutes ????#UCL pic.twitter.com/XsohPejL2j

66th Min: LIVERPOOL HAVE TURNED IT AROUND

Klopp's visitors have wrestled control back and they are now 30 minutes away from the final in Paris!!! Alexander-Arnold has time to hang a cross into the back post and Diaz nods past Rulli.

What a reaction from Liverpool!!!

A reaction has been coming from Liverpool and Klopp's side are back in front on aggregate. Salah spots a gap in behind the Villarreal back line and Fabinho fires home through Rulli's legs.

Liverpool weren't going to roll over that easily...

Villarreal are caught sleeping from a quick Liverpool free kick and Trent Alexander-Arnold's shot loops of Coquelin and clips the top of Geronimo Rulli's crossbar.

Liverpool come again and Diaz goes for an acrobatic volley at the back post but his effort flies wide!!

50th Min: Liverpool have struggled more than any other game this season with a first half xG of 0.006

Liverpool have three touches in the Villarreal penalty area for their lowest first-half total in all competitions this season, while their 0.06 xG is their second-lowest first-half mark.#VILLIV #UCL

A HUGE 45 MINUTES INCOMING IN CASTELLON

A change at the break for Liverpool as Luis Diaz replaces Jota but Moreno looks set to soldier on for Villarreal.

46' - The second-half is underway. Diaz is on in place of Jota at the break.

An incredible first 45 minutes in Castellon as goals from Boulaye Dia and Francis Coquelin have flipped the script to level the tie at 2-2 on aggregate.

Liverpool need a response in the second 45 as the Yellow Submarine look for a historical upset!!!!

Incredible stuff as Villarreal draw level on aggregate just before the break. Etienne Capoue does well to keep a loose ball alive inside the box and his back post dink is headed home by Francis Coquelin!!!!

A great cross, a stunning leap, and a perfect header! ????

Lo Celso burst in behind Virgil van Dijk and collides with Alisson............but referee Danny Makkelie waves away the hosts shouts for a spot kick.

Worrying news for Villarreal as Moreno appears to be struggling........

An incredible moment. Everyone expects a penalty, ref immediately waved it away.

23rd Min: Liverpool break through again as Jota races in behind the Villarreal back line but Raul Albiol recovers superbly to snuff out the danger.

15th Min: More positive play from Liverpool as a loose ball bounces kindly for Naby Keita and his drive clips the top of the crossbar.........but the offside flag goes up!!

What a time for Boulaye Dia to score his first-ever Champions League goal!

A DREAM start for Villarreal as Boulaye Dia hands them a 1-0 lead!!!!

Boulaye Dia gets the opener! ⚽️

Villarreal have already halved their deficit in the third minute of the game! ????

This tie IS NOT over! ????#UCL pic.twitter.com/fKUIE4JZ7F

Giovani Lo Celso's cross is recycled back into the box by Pervis Estupinan and Dia pokes home past Alisson!!!

What a time for Boulaye Dia to score his first #UCL goal! ???? pic.twitter.com/k73ozw98zL

Liverpool get the game underway!!!

5 Mins to KO: Moreno is the key for Villarreal

Can Moreno inspire Villarreal to the final?

20 Mins to KO: Villarreal will be hoping to spring a shock

Former Arsenal star Robert Pires played on that famous night against Villarreal - both later joining the Yellow Submarine - and he believes Liverpool will be in for a battle right from the start tonight!!

Villarreal's only previous Champions League semi final came in 2006 as Arsene Wenger's Arsenal drew 0-0 in the second leg in Castellon to progress to the final with a 1-0 aggregate win. Can Emery rewrite history tonight?

Torrential rain in the Castellon area has continued all day with the poor weather set to continue right up until KO at the Estadio de la Ceramica.

Bucketing down in Villarreal again pic.twitter.com/n9n2uHk60g

A bold starting side for Emery on the night in Castellon as Spain international Gerard Moreno returns to lead the hosts attack. He replaces Arnaut Danjuma, with Boulaye Dia preferred ahead of Samuel Chukwueze as his strike partner.

The BIG GUNS are back for Klopp following a raft of changes for their 2-0 Premier League win over Newcastle. Two alterations from the first leg win at Anfield with Naby Keita and Diogo Jota in for skipper Jordan Henderson and Luis Diaz.

The Reds to face @VillarrealCF tonight in the #UCL semi-final second leg! #VILLIV

1 hour 40 mins to KO: Just over 90 minutes until KO on a HUGE night at the Estadio de la Ceramica

2 hours to KO: Welcome to The Sporting News' live coverage of Liverpool's second-leg trip to Villarreal, with a place in Paris on the line. Home boss Unai Emery wants perfection from Villarreal:

In the US, Spanish-language coverage of the Champions League is also available on fuboTV, which offers a free trial to new subscribers.

In Canada, every Champions League game streams live on DAZN.