CNN
Share on FacebookShare Share on TwitterTweet
Three top ethics experts and prominent critics of President Donald Trump on Wednesday formally requested the Senate Ethics Committee investigate whether Republican Sen. Lindsey Graham of South Carolina violated the chamber's rules in his probe over how ma
In a letter, Walter Shaub, a former top ethics watchdog for the federal government, Richard Painter, the chief ethics lawyer for President George W. Bush's administration, and Claire Finkelstein, the director of the University of Pennsylvania's Center for Ethics and the Rule of Law, asked the panel to look into Graham's call last week with Georgia Secretary of State Brad Raffensperger, and whether Graham "suggested" that Raffensperger "disenfranchise Georgia voters by not counting votes lawfully cast for the office of president."
They also asked the panel to investigate whether Graham "threatened anyone with a Senate investigation of the Georgia vote tally."
The Senate panel reviews complaints "from virtually any source," according to its guidelines, but whether it will probe Graham is uncertain. The panel, which is evenly split between three Democrats and three Republicans, acts in secrecy and often offers little more than a slap on the wrist to admonish a senator's misconduct.
Graham told CNN "no, not at all" on Wednesday when asked if he's concerned about facing any ethics investigation.
"I get accused of everything, I'm just going to keep being me," Graham said in the Capitol. "I called up the Secretary of State to find out how you verify a signature and what database you use because I think it's important that if we're going to vote by mail, we get it right." 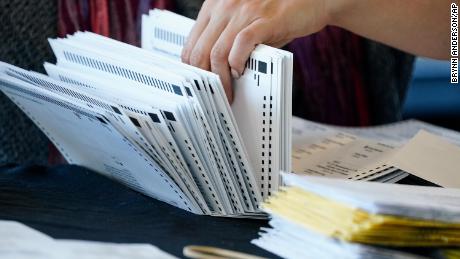 Graham, the chairman of the Senate Judiciary Committee and a top Trump ally, has no oversight over election matters, which falls under the jurisdiction of the Senate Rules Committee, and has faced a barrage of criticism for his interventions in the democratic process.
But he defended his call to Raffensperger, who is currently overseeing the Georgia recount, and has said that he also investigated the voting practices of Arizona and Nevada -- two other states that Joe Biden won. Graham has maintained that he's interested in protecting the integrity of absentee voting and zeroing-in on signature matching, although there is no evidence of widespread voter fraud.
Graham has not looked into states that Trump won. Asked why not, Graham said Wednesday "because they're not in question. I mean, we're looking at states where there's a contest. I'm not looking at states that he lost. I'm looking at states where there's a challenge."
Graham spokesman Kevin Bishop also dismissed the ethics complaint, noting that Painter and Shaub are "long-time, frequent and vocal critics of Sen. Graham."
In the letter, the three ethics experts and Trump critics wrote that if the allegations are true, Graham's conduct is "an abuse of office" and "unbecoming of a senator," and claimed that the Ethics committee led by Oklahoma Republican Sen. James Lankford and Delaware Democratic Sen. Chris Coons should "seek an appropriate sanction or any other appropriate remedy."
"For the Chairman of the Senate Judiciary Committee to suggest to a state Secretary of State that he refrain from counting lawful votes threatens the electoral process and damages representative democracy," they wrote.
Raffensperger said on CNN's "The Situation Room" on Monday that Graham had hinted that he should try to discard some ballots in Georgia.
"It was just an implication of, 'Look hard and see how many ballots you could throw out,'" said Raffensperger.
Georgia election implementation manager Gabriel Sterling, who works for Raffensperger, said on Tuesday that he had participated in the call with Graham on Friday. Sterling said he had heard the senator ask if state officials could throw out all of the absentee ballots where a "percentage" of signatures did not "truly" match.
Graham's comments "might have gone a little to the edge of" what people deem acceptable, said Sterling. But he added that he understood why Raffensperger and Graham interpreted the conversation differently.
"The President is going to continue to fight; his supporters continue to fight," Sterling said. "Our job is to continue to follow the law, and we were answering process questions."

CNN's Sarah Fortinsky and Ted Barrett contributed to this report.