Khloé Kardashian has responded after a Twitter user said she looks like an, 'alien,' as a result of, 'plastic surgery.'

The reality star didn't hold back in her response, and even suggested they mute or block her.

The Kardashian sister was criticised in the comments of an advert for Nurtec.

Khloé fronted the advertisement for the prescription medicine used to treat migraines.

The Twitter user wrote, 'Does research indicate that the more plastic surgery someone has the more likely they are to suffer from migraines?'

They continued, 'What kind of pharmaceutical company chooses someone who has had so much plastic surgery they look like an alien, as their spokesperson?'

Khloé responded, 'sorry you feel that way. You have every right to block/mute me.'

She went on, 'I am trying to help many out there who suffer in silence. I R completely entitled to your opinions. Just as I am mine.'

Khloé noticed the Twitter user had, 'feminist,' written in their bio.

So she concluded, 'I don’t think you should refer to yourself as a feminist if you are attacking a woman unprovoked'

This isn't the only battle Khloé is fighting at the moment.

She has come under fire for calling people out on using single-use plastic water bottles. 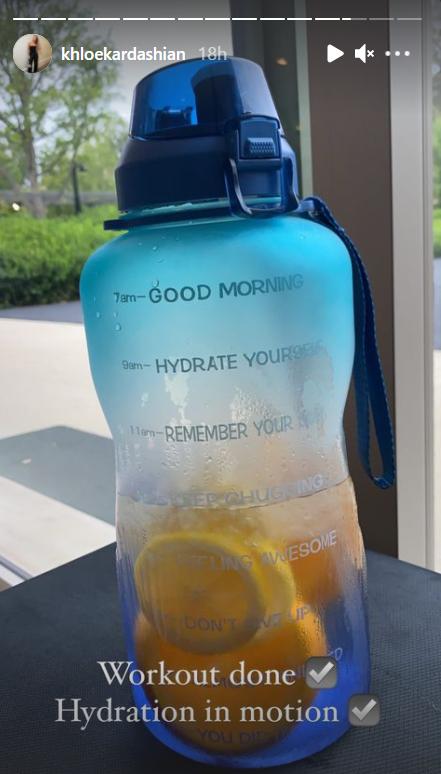 She told her followers that she often sees people pouring water from single-use plastic bottles into the reusable bottles.

Khloé said it, "irks," her because it, "defeats the purpose."

She offered these people a solution by advising them to buy water filtration adaptors to attach to their sinks.

Many took to social media, slamming the reality star for sending mixed messages.

'I’m irked because Khloe Kardashian flys all over the world on private jets causing massive pollution.'

After seeing the comments, she took to social media to set the record straight.

In a Twitter thread, Khloé said, 'I am constantly learning and trying to be better for the environment for the sake of my daughter.'

'I am the last one to say that I’m super environmentally conscious because I know how much more I have to learn.'

'All I was simply saying is a pet peeve of MINE,' she continued.

'I find it silly that people are pouring 4 to 5 single use plastic bottles into a reusable container. It’s sort of defeats the purpose.'

'I was trying to provide a suggestion such as a water filtration system that you can buy easily for the price of a case of water bottles.'

'It’s not about being perfect'

Khloé went on, 'Sometimes plastic water bottles are the only option for some people and I totally get that.

'Sometimes it’s what I grab. It’s not about being perfect. It’s about learning and hopefully making small changes for our future.'

'Holy smokes. Anyways I love when I get educated on easy tips as to how to potentially make a change in our world.'

'Feel free to tweet me some tips,' the 36-year-old added.

'I’m always down to learn and I’ll see how that incorporates into my life. Hopefully We all do our part in our own ways.'

'I’m proud of us all for doing our best and simply trying.'