Fox News
Share on FacebookShare Share on TwitterTweet
Sparks flew on “The View” Thursday as the co-hosts clashed over whether or not CNN chief medical correspondent Dr. Sanjay Gupta should have appeared on popular podcast host Joe Rogan's “The Joe Rogan Experience” to discuss the coronavirus vaccine.
Media top headlines October 14

Sparks flew on "The View" Thursday as the co-hosts clashed over whether or not CNN chief medical correspondent Dr. Sanjay Gupta should have appeared on "The Joe Rogan Experience" podcast to discuss the coronavirus vaccine.

Co-hosts Joy Behar and Sunny Hostin slammed Rogan, agreeing they wouldn't be making attempts to reach out to his vast audience because of his refusal to take the coronavirus vaccine, as well as some of his past remarks, while co-hosts Sherri Shepherd, Ana Navarro and Sara Haines agreed it was beneficial for listeners to hear the two discuss the topic.

Rogan suggested getting natural immunity from contracting the coronavirus was better than taking the vaccine. Rogan later claimed to Gupta it would be best to actually take the vaccine and then get sick to better your immunity.

"Yes, let’s listen to a radio talk show host instead of a scientist and a doctor," Behar said sarcastically. "Clearly Dr. Gupta did not change Joe Rogan’s mind."

Navarro praised Gupta and Rogan for having the conversation, and noted that because Rogan had millions of listeners, even just a few people changing their minds to take the vaccine would be significant.

"He's so arrogant," Behar said before co-host Sherri Shepherd chimed in, describing how she knew Rogan as "a very smart man" and thought it was great the two had respectful discourse on the subject. 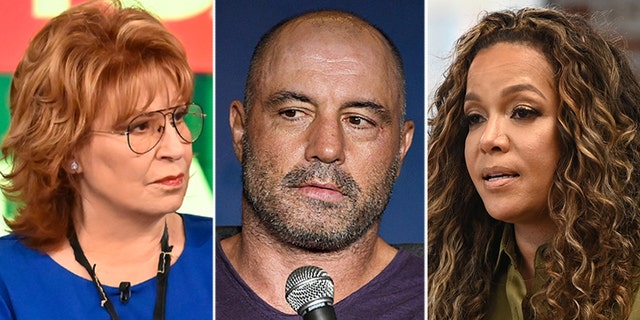 Behar read a quote from radio show host Howard Stern sharply criticizing Rogan for choosing not to take the vaccine.

"But then I don’t think by saying, ‘You’re an idiot,’ is going to change a person’s mind," Shepherd said, to which Hostin replied that even Gupta couldn't convince the host.

"But you’re not going to change a mind. You’re not trying to change Joe’s mind, but out of 200 million listening there might be a mind changed. And Sanjay respected Joe enough to actually go on there," Shepherd said.

Haines said there needed to be more conversations about these topics and not less if people actually wanted to move the needle on what others believe.

"I think this was so important to go on there, not to convince Joe Rogan and not have the intention of convincing anyone else. Provide the facts, answer with science. Let people make up their own minds," Haines said. "That’s the problem in this day and age. We’re telling people how to feel. They will feel what they want. Give them enough information that they make that decision and win on merit."

Hostin retorted with a list of disparaging labels for Rogan.

"Yes, he has all of these listeners. That’s so wonderful. But some of the stuff that he has said – he’s transphobic. He's Islamophobic. He has said racist things … and these people continue to listen to him," Hostin said. "I think if you are still listening to him, knowing his history, I’m not interested in reaching out to you."

Shepherd added that people shouldn't be calling anybody else idiots because she wouldn't want to be called an idiot for what she believes.

"You are going to change my mind when you have a respectful discourse because I want to make my own decisions. There are people that still listen to Joe that still are wavering, and because Sanjay went on there and said things about the mask and the pricking of fingers, they might go, ‘Oh if I can change one heart, another heart can change another heart.’"