CNN
Share on FacebookShare Share on TwitterTweet
We now have a look at Lin-Manuel Miranda bringing one of his Broadway hits to the big screen.
The first trailer for "In the Heights" debuted Thursday, and it's a major production.
The film tells the story of a mostly Hispanic neighborhood in New York City and centers around bodega owner Usnavi, played by Anthony Ramos. 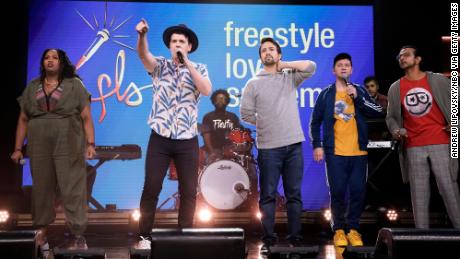 It also stars Corey Hawkins, Marc Anthony, Jimmy Smits, Melissa Barrera, Daphne Rubin-Vega, Dascha Polanco and Stephanie Beatriz and is directed by Jon M. Chu of "Crazy Rich Asians" fame.
Judging by the trailer, the movie sticks close to the Tony-winning musical on which it is based.
The success of "In the Heights" on the Great White Way was a precursor to Miranda's mega-successful "Hamilton."
The Warner Bros. adaptation of "In the Heights" is scheduled to hit theaters next summer. Warner Bros. is owned by CNN's parent company.
Similar shots
This week's most popular shots
Topics of the week
Father's Day 2021 Nets Suns Juneteenth U.S. Open Sixers Chrissy Teigen Clippers Kawhi Leonard Nintendo E3
Hot topics