The New York Times
Share on FacebookShare Share on TwitterTweet
Ms. Omar, a member of the “Squad” of progressive women of color elected to the House two years ago, topped a well-funded challenger in a victory for the left. 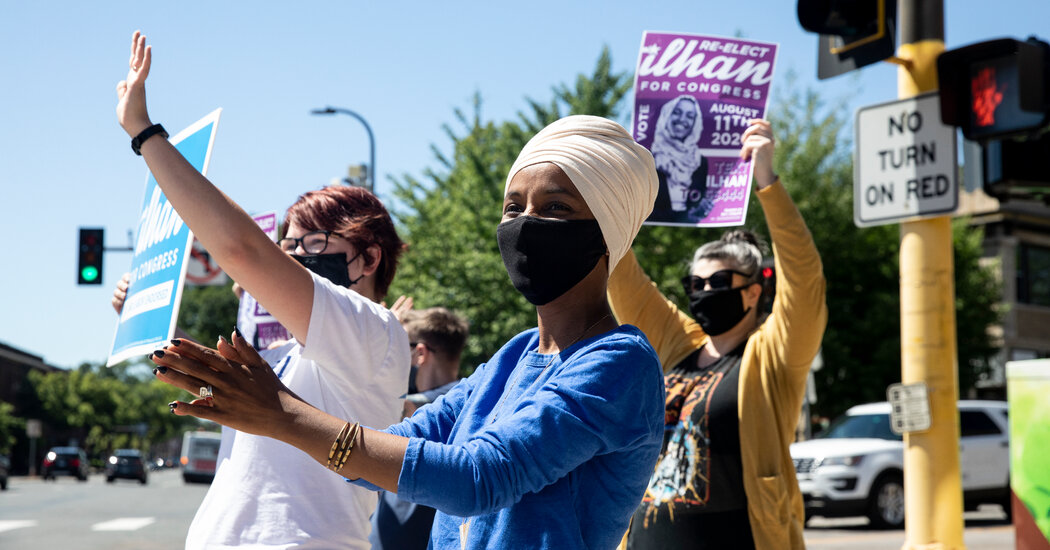 MINNEAPOLIS — Representative Ilhan Omar of Minnesota fended off a well-funded primary challenger on Tuesday, ensuring a clean sweep of re-election fights for the group of first-term Democratic congresswomen of color known as the Squad and sending a message to Washington about the staying power of the party’s new progressive voices.

Ms. Omar, who made history in 2018 by becoming the first Somali-American to be elected to Congress, as well as the first naturalized citizen of African birth and the first woman of color from Minnesota to do so, secured the victory after spending her first two years in the Washington spotlight.

Her unabashed embrace of left-wing politics has won her loyal followers, both in Minnesota and across the country. She has, however, become a lightning rod for conservatives and has faced criticism from some Democrats, particularly after several episodes in 2019 in which she was accused of making anti-Semitic remarks.

In the deep-blue district, Ms. Omar’s primary success on Tuesday virtually assures she will serve a second term in Congress. Early Wednesday, she was leading her chief opponent, Antone Melton-Meaux, by more than 15 percentage points.

“In Minnesota, we know that organized people will always beat organized money,” Ms. Omar wrote on Twitter. “Tonight, our movement didn’t just win. We earned a mandate for change. Despite outside efforts to defeat us, we once again broke turnout records. Despite the attacks, our support has only grown.”

Mr. Melton-Meaux had received extensive financial support from national groups hoping to see the incumbent ousted. During the second quarter of 2020, Mr. Melton-Meaux raised six times as much as Ms. Omar did, and an analysis from The MinnPost showed about 20 percent of his large-dollar donations came with bundling help from pro-Israel political action committees. Mr. Melton-Meaux also received the endorsement of The Star Tribune, the region’s flagship newspaper.

But Democrats rallied to Ms. Omar’s aid in recent weeks, making bedfellows of progressives such as Representative Alexandria Ocasio-Cortez and establishment figures like Speaker Nancy Pelosi.

The race was more than a referendum on her first term, and was upended by the two factors that have reshaped every facet of political life in 2020: the coronavirus pandemic and the national protests over racial inequality and police brutality that began in May after George Floyd was killed in Minneapolis. The unrest was particularly acute in Minneapolis, where fires and chaos raged for days. One Police Department precinct was burned to the ground.

Ms. Omar and Mr. Melton-Meaux both emphasized the need for social justice and an end to systemic racism. But Ms. Omar’s vision of progressive change went further, as she embraced calls to restructure the Police Department altogether, diverting money to invest in social services.

The virus also forced most of the campaigning inside and online. Some observers thought it could further highlight Mr. Melton-Meaux’s financial advantage as he flooded airwaves for weeks.

Mr. Melton-Meaux had sought to make the election a referendum on Ms. Omar’s national profile, deploying a similar argument that did not work in Michigan, when Representative Rashida Tlaib beat back a challenger who tried to cast her as too progressive and nationally focused for the district.

On Election Day, Ms. Omar made several public appearances, a sign that her campaign was taking nothing for granted.

In the afternoon, she courted voters at a market in Minneapolis, ordering Mexican food and eating with staff members with no sign of concern.

“Everything in this primary has felt troubling, from the money coming to the overt xenophobic messaging,” she said. “But this is the Fifth. This is Minneapolis. This is the place not only to make an overt statement about how excited they are to have immigrants in their neighborhood, but they voted one into Congress.”

Later, at an evening campaign event in Dinkytown, a Minneapolis neighborhood where Ms. Omar likes to spend election nights talking to voters, young supporters gathered as people in cars drove past yelling “Ilhan!” and “We love you!”

Britt D’Arezzo, 22, said national perceptions of Ms. Omar didn’t account for her retail politics and her visibility at home.

“They don’t know her local activism,” Ms. D’Arezzo said. “They don’t see her walking around and just hanging out on corners. They don’t see the way she connects with us.”

Ms. Omar’s victory was one of the final electoral priorities for progressive organizations during the 2020 primary season, which began with abject disappointment for them but has since turned around. When the leading progressive candidates, Senators Bernie Sanders of Vermont and Elizabeth Warren of Massachusetts, lost the party’s presidential nomination to former Vice President Joseph R. Biden Jr., some had written the left wing of Democrats off — minimizing it as a collection of activists and social media voices, not something with mass electoral appeal.

In the months since, a string of insurgent victories in down-ballot races — and the strong re-elections of people like Ms. Omar, Representative Rashida Tlaib of Michigan and Representative Alexandria Ocasio-Cortez of New York — point to a more complicated picture, and a wing of the party that remains ascendant.

In recent months, challengers supported by groups like Justice Democrats and the Sunrise Movement have won primaries in New York, Illinois and Missouri. The victory in St. Louis was particularly notable, the first time a Black challenger had been able to unseat a member of the Black Congressional Caucus, a key block of the House leadership’s power that represents many deep-blue Democratic districts.

Taken together, the triumphs by challengers and primary victories by incumbents have offered a path forward for political movements on the left. If you can get into office and stay there, people like Ms. Omar argue, you can prove to constituents that your proposed reforms are not radical.

Justice Democrats also issued a statement about Ms. Omar’s success on Tuesday. In recent weeks, Democrats across the spectrum have lined up to support the incumbent, making a rare alliance between Speaker Nancy Pelosi and the groups that seek to push her left.