Bonner County Daily Bee
Share on FacebookShare Share on TwitterTweet
COEUR d’ALENE — The prayer walk Geoffrey Winkler led on Saturday was a lot less dangerous than the one in September 2018.

COEUR d’ALENE — The prayer walk Geoffrey Winkler led on Saturday was a lot less dangerous than the one in September 2018.

Then, he covered 220 miles in 15 days as he circled Kootenai County.

That’s because on day two, he came upon a bear den. On day 6, he encountered a cougar. On day 13, he was surrounded by wolves.

Yeah, he prayed, all right.

While there were no predators at McEuen Park on Saturday, there were a few dogs, kids, bicyclists and skateboarders. And none of those were going to deter the pastor of New Life Church from leading a one-hour prayer walk on the day between Good Friday and Easter Sunday.

“If anything, this quarantine has highlighted how much we need each other,” he told the group of about 10 people who joined him on a breezy, sunny morning.

Before they headed out, Winkler said people shouldn’t curse what is going on with the coronavirus.

“Amazing breakthroughs are happening,” he said, citing things like:

• Innovations and relationships forming in business.

As he spoke, clouds broke apart and sunlight fell across the group.

“We’re going to continue to press in to all the things God wants to release over our community and over our state,” he said.

Then, he added, “we’re just going to start walking. Ready?”

As participants walked and kept their distance, some prayed aloud. Others, silently. A few wore masks.

Sometimes, the conversation turned to daily challenges and the usual light banter, then returned to prayer.

Two arrived well after the 9 a.m. starting time, but for a good reason.

“We had to have coffee, so we’re late,” the woman answered with a laugh.

Cindy Gonzalez said she wanted to be there because “God is in control. God’s not causing this, and he’s not happy with it. He wants the people to stand up and pray.”

Martha McCain said it was good to be out walking in a beautiful park on a nice day, surrounded by people of faith.

She said while these are difficult times, she is looking forward to the changes it may bring, like getting back to faith and family.

Weadick was determined not to miss it.

“He’s a great leader in our community,” Weadick said of Winkler. “What he does, God blesses. I want to be around that, support that, and help trying to push forward with great innovation to love and serve our community.”

The walk over, the men and women formed a spaced-out circle for prayer and song.

Winkler, wrapping things up, said loudly, “He is risen.”

“He is risen indeed,” came a unified response. 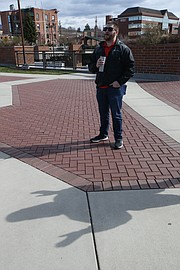