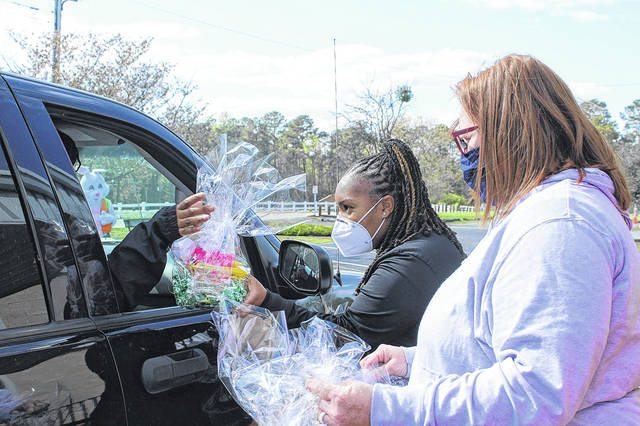 Children happily received their free Easter baskets from Clinton Recreation and Parks personnel during a special event this week.

The team at Clinton Recreation and Parks had on Kidz Bop for the children plus the Easter Bunny was available for photos. A woman came to Royal Lane just to dance with the Easter Bunny then drive off to enjoy the rest of her day.

The children who weren’t scared of the Easter Bunny were excited to get out of their cars and take a picture with the dancing bunny. Yolanda Williams was very excited to bring her two boys to the Easter basket giveaway and capture a photo of her boys with the Easter bunny.

Team members Recreation Program Manager Alyssa Bradshaw and Vonnie McNeil would go up to the cars and ask for the names of the children then go and retrieve baskets.

“We knew that the community was tired of sitting in the house so we came up with a drive through so they can sit in their car, we have a mask and we can give them the basket,” McNeil said. “I’m creative here, I’m always doing something creative. It’s pretty cool. I’m really excited now because I know that we’re opening for everybody to come in on Monday. But we still have to be careful but I’m excited. I know the kids are excited to come back and play.

The number of Easter baskets the team was set to give away increased quite a bit since the idea first originated. They were set to purchase 85 baskets to youth ages 13 and under around Clinton and Sampson County, then upped that to 130. By the day of the giveaway, they had 150 baskets to pass out to the youth of the county.

The Easter baskets were completely free to the community, all people had to do was register their kid for a basket through recreation software.

The Clinton Fire Department was supposed to be present at the event, sadly they were pulled away to a number of calls and they could not house the Easter bunny for people to wave to. The Easter bunny made the best of the situation by dancing to the music, waving to the people in the drive-thru and posing for pictures. The Easter bunny even attempted to start a dance battle with team members but they decided to get into battle.

The baskets had some swag in them such as eggs with stickers, candy and a small toy. Plus the baskets had some type of sports-related item like small soccer balls, basketballs and footballs — representing the impending kick-off of rec sports this Monday, April 5. The baskets also had Recreation and Parks cups and pencils and bubbles. Lastly, some special baskets had a lucky egg that had a certificate for one free day at the pool.

The 150 baskets came from the Clinton Recreation and Parks’ budget. They started planning the event in mid-February and started registration in March. They hit their capacity for registration the day before the event and had to turn some away.