CNBC
Share on FacebookShare Share on TwitterTweet
Stephen King adaptation "Doctor Sleep" is expected to earn between $20 million and $25 million in its opening weekend.

Since 1976, nearly 50 movies based on Stephen King's prolific collection of novels, novellas and short stories have been released in cinemas around the globe.

"Doctor Sleep" tells the story of Danny Torrance, the young son of Jack Torrance from "The Shining," who is now grown. Danny, played by Ewan McGregor, has been numbing his psychic abilities with alcohol but is still haunted by the memory of his father. When he meets a young girl who possesses the same gifts that he has, he must protect her from a group of people who seek to kill her and steal her powers.

The Warner Bros. film, which is rated R, is expected to earn between $20 million and $25 million in its opening weekend.

"Once people see this movie Thursday night, I think we are going to see some really big numbers," Paul Dergarabedian, senior media analyst at Comscore, said.

Dergarabedian saw a screener of the film last month and said the film "is very R," hinting at moments of horror and gore that were not shown in the trailer.

"It's going to play a little bit older," Shawn Robbins, chief analyst at Boxoffice.com, agreed. "It's a little more cerebral. It could open at $25 million. It's a King movie, and his fans will show up."

King of the box office

And show up they have. Since "Carrie" was adapted into a film and released in 1976, movies based on King's work have tallied more than $2.8 billion in sales at the global box office. 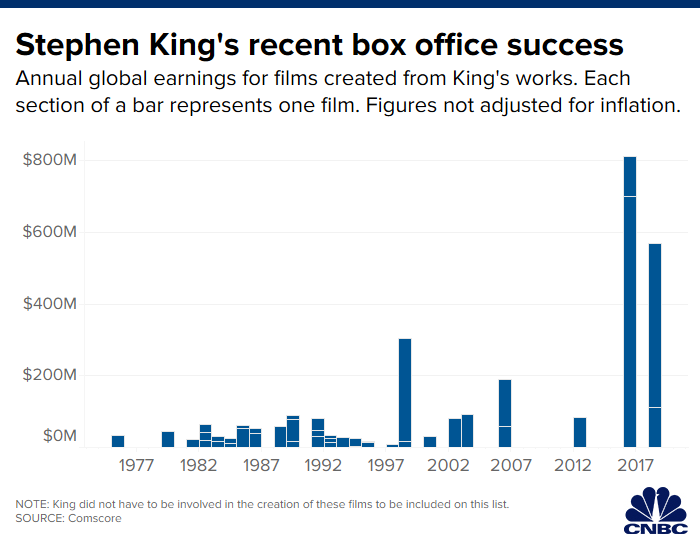 "I said, 'Look, I'm a King fanatic, I have been since I'm a kid, you are my hero, but when I read 'Doctor Sleep,' all the images in my head were Kubrick's images,'" Flanagan told Entertainment Weekly about his version of "Doctor Sleep."

King has always been very vocal about his discontentwith Kubrick's film. Namely, how Kubrick portrayed Jack and Danny's father-son relationship and that he left the iconic Overlook Hotel standing at the end of the film. In King's novel, the hotel is destroyed.

Bill Skarsgard as Pennywise the Clown in a still from Warner Bros.' "It: Chapter 2."

When King wrote the sequel the hotel remained destroyed. So, in order for Flanagan to mesh Kubrick's masterpiece with King's work, he decided to use the ending of Kubrick's film, hotel abandoned but not blown-up, as the jumping off point for his iteration of "Doctor Sleep."

Notably, Flanagan painstakingly recreated the interior of the Overlook Hotel for the film in a studio lot in Atlanta, Georgia.

"All I can say is, Mike took my material, he created a terrific story, people who have seen this movie flip for it, and I flipped for it, too," King told EW. "Because he managed to take my novel of 'Doctor Sleep,' the sequel, and somehow weld it seamlessly to the Kubrick version of 'The Shining' the movie. So, yeah, I liked it a lot."