Sporting News
Share on FacebookShare Share on TwitterTweet
Dejounte Murray's name is being floated around in trade rumors. The Spurs may not trade him but there's a reason why he is rumored to be available. 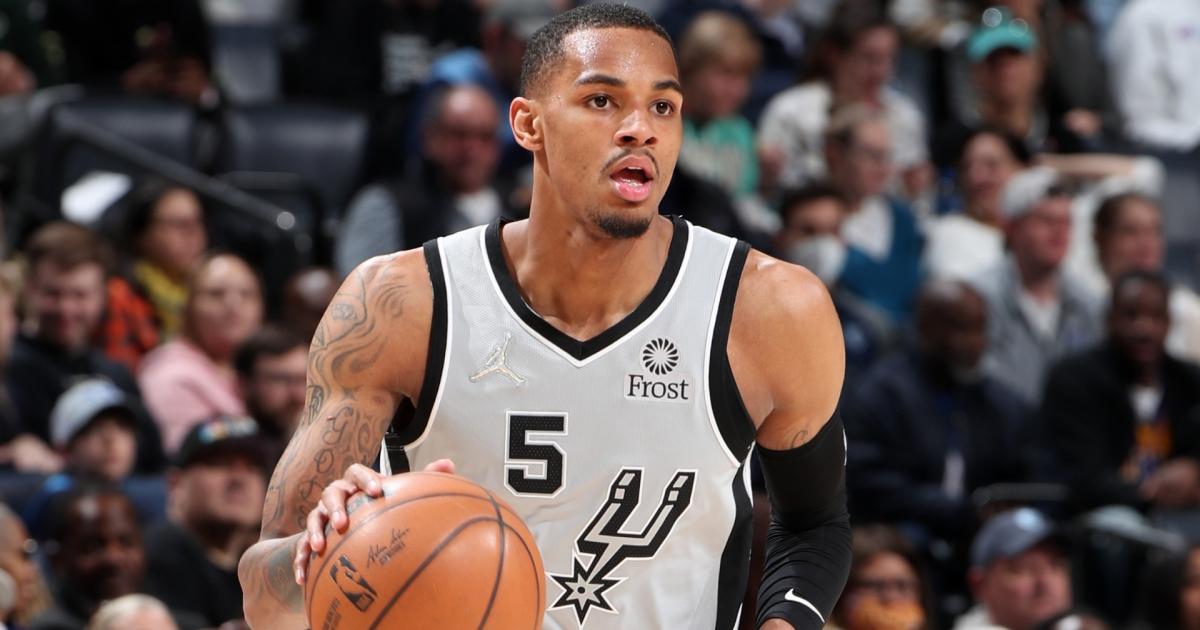 Dejounte Murray was one of the NBA's breakout stars during the 2021-22 NBA season, and it looked like he would be a key part of the Spurs' future.

However, there is now buzz that he could be traded ahead of the 2022 NBA Draft.

Bleacher Report's Jake Fischer has reported that Murray's name has popped up in trade rumors across the NBA. The Spurs have been willing to listen to offers for Murray, but their asking price is high.

The Spurs are fielding offers for Murray and have told multiple interested teams it would take a 'Jrue Holiday-like package' for San Antonio to part with the 25-year-old floor general, setting a rough benchmark of three first-round picks for any suitor to pry Murray free.

Murray, for one, seems to be buying into these trade rumors. He quote-tweeted the story that Fischer reported with a simple message.

The message marked Murray's second cryptic tweet of the week; his first, which came on Tuesday, simply contained four sets of the eyes emoji.

Murray was named an All-Star for the first time last season and averaged 21.1 points, 8.3 rebounds, 9.2 assists and 2 steals per game during the season. All were career-best marks, and he led the NBA in steals per game.

As such, it's no surprise that the Spurs would want a hefty return for him. It's just a question of whether they will get a "Jrue Holiday-type package" or whether the team will opt to keep Murray.

MORE: Who do the Spurs land in SN's final NBA mock draft?

Given Murray's stats and his extremely high trade value, some may be asking why Murray's name is even popping up in trade rumors. The answer to that is simple.

The Spurs don't seem likely to contend any time soon. They have a solid roster, but they are lacking star power outside of Murray. That's part of the reason they went 34-48 last season to barely make it into the NBA play-in tournament.

As such, it may behoove the Spurs to rebuild. That appears to be their preferred course of action, and as Fischer reports, Murray on a max extension wouldn't exactly fit well into that timeline.

There’s a sense among NBA executives that San Antonio is still open to an extended rebuild, and Murray’s inevitably expensive contract extension is already looming on the horizon. His current four-year, $64 million deal is set to expire in 2024, and Murray is expected to command a maximum salary in line with his current production and skill progression.

Giving up Murray would surely sting from an on-the-court perspective, but San Antonio would also be selling high on him. That could position the Spurs for more future success than signing Murray to a lucrative, long-term contract.

Of course, that doesn't mean Murray will be traded. But he certainly is a player to watch during the 2022 NBA Draft and ahead of free agency.

NBA DRAFT BIG BOARD: Paolo Banchero is the top prospect in 2022 NBA Draft

The Bucks acquired Jrue Holiday ahead of the 2020-21 NBA season as an upgrade over Eric Bledsoe. Milwaukee hoped that Holiday's hard-nosed defense would help them become a legitimate title contender.

It paid off immediately. The Bucks won the 2021 NBA Finals with Holiday serving as the team's third star along with Giannis Antetokounmpo and Khris Middleton.

That said, getting Holiday was no easy feat. The Bucks had to give up a lot to get the Pelicans guard in a four-team trade, as you can see below.

Still, there are contenders out there that may believe they are one piece away from being a title contender. As such, they may look at Murray and then back at the Holiday trade and think, "Why can't we do the same?"