Even with majorities in Congress, Biden faces a hard time getting his Covid relief bill passed

CNBC
Share on FacebookShare Share on TwitterTweet
Biden will have to get a large coronavirus relief plan through a closely divided Congress as the Senate holds Trump's impeachment trial. 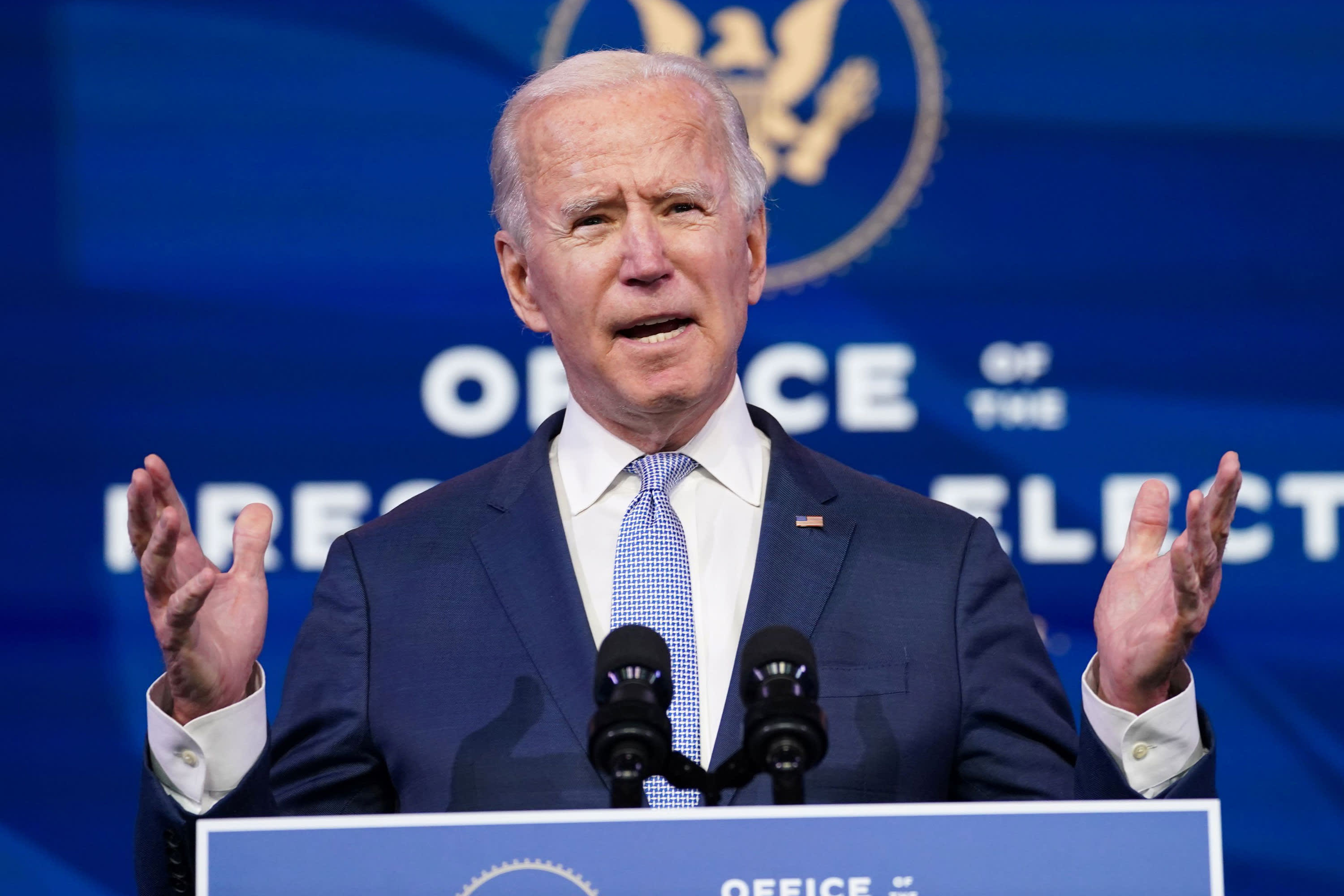 U.S. President-elect Joe Biden address the protests taking place in and around the U.S. Capitol in Washington as the U.S. Congress held a joint session to certify the 2020 election results, at a news conference at his transition headquarters in Wilmington, Delaware, January 6, 2021.

President-elect Joe Biden faces a range of pitfalls in trying to push his coronavirus relief plan through Congress.

The Democrat unveiled his $1.9 trillion aid proposal Thursday and will make his case for it in a prime-time speech, scheduled for 7:15 p.m. ET. He will push for more direct cash to Americans, an extension of and increase to supplemental employment insurance, state and local government relief, Covid-19 vaccine distribution funds and rental assistance, among other goals.

His call for fresh assistance comes as a rampaging pandemic, which killed a record 4,327 Americans on Tuesday, batters the U.S. economy. Initial jobless claims rose to 965,000 last week, the highest since late August, the Labor Department said Thursday.

Biden has said reining in the virus and boosting the economy will be his top priorities after he takes office on Jan. 20. He will have to navigate a political mess, which includes GOP resistance to more spending and the impeachment trial, to get a relief plan through Congress.

The president-elect has consulted with congressional allies about the plan in recent weeks and aims to get it through Congress as quickly as he can, senior Biden administration officials told reporters Thursday. Asked about whether it has approval within the whole Senate Democratic caucus, an official said, "We're hopeful that the ideas that are laid out here and the action that is reflected here is something there is a lot of support for."

Speaker Nancy Pelosi, D-Calif., and Biden's Democratic Party control the House. Democrats will gain a narrow Senate majority this month when Sens.-elect Raphael Warnock and Jon Ossoff from Georgia are sworn in. Vice President-elect Kamala Harris will hold a tiebreaking vote in the 50-50 Senate.

The slim Democratic majorities in both chambers could create some headaches for Biden.

The House can pass bills with a simple majority of 218 votes in a full chamber. Democrats now hold 222 seats. However, the number will temporarily drop to 219 when three Democrats — Cedric Richmond of Louisiana, Marcia Fudge of Ohio and Deb Haaland of New Mexico — join Biden's administration.

It will leave Democrats with a thin margin of error to pass legislation. The party will either have to win support from all of its members or earn Republican votes to approve a coronavirus aid package.

Biden aims to pass his relief plan with bipartisan support, a person familiar with the transition team's thinking confirmed to CNBC. GOP backing could prove even more important in the Senate. A bill would need support from all Democrats and 10 Republicans unless Democrats opt to use a procedure called budget reconciliation to pass it with only a majority.

Using the process could limit what Democrats can put in a bill, because it applies only to revenue and spending measures. It could also take longer to approve legislation through reconciliation.

In addition, the Senate has to decide how much time it can devote to pandemic aid as it considers whether to convict Trump on charges of inciting an insurrection and moves to confirm Biden's Cabinet. McConnell said Wednesday that he would not start the president's trial until Tuesday — the day before Biden's inauguration — at the earliest. Trump's first impeachment trial last year took about three weeks.

In a statement Wednesday, Biden said he hopes the Senate can juggle all of those responsibilities at the same time.

"This nation also remains in the grip of a deadly virus and a reeling economy," he said after the House impeached Trump. "I hope that the Senate leadership will find a way to deal with their Constitutional responsibilities on impeachment while also working on the other urgent business of this nation."

Congressional Democrats said it did not go far enough to help jobless Americans struggling to afford food and housing. But many Republicans will not want to spend more federal money soon after voting for the last package.

The bill, which came about months after Congress let pandemic-era financial lifelines for individuals and businesses collapse over the summer, included a $300 per week unemployment insurance boost through mid-March. It extended pandemic-era expansions of jobless benefits.

It sent payments of $600, plus the same amount for every child, to most Americans. It also put more than $300 billion into small business support, more than $8 billion into vaccine distribution and $25 billion into rental assistance.

Biden's plan calls for $1,400 direct payments, which would bring the total between the two packages to $2,000. It would extend the pandemic-era expansion of unemployment benefits through September, and hike the federal supplement to $400 a week from $300.

It would send $350 billion more to state and local governments. The plan would inject $20 billion into a national Covid-19 vaccination program and $50 billion into an expansion of testing.

Biden's proposal would include $170 billion for K-12 and higher education. It would put another $30 billion into rental and utilities assistance, and extend federal eviction and foreclosure moratoriums through September. The plan would also expand child tax credits.

As part of the package, the president-elect also called on Congress to raise the federal minimum wage to $15 per hour. It does not include Biden's proposed $10,000 in student-loan forgiveness, though the administration is expected to extend a federal loan payment and interest moratorium past its current expiration date at the end of the month.

The Democratic-held House passed a bill in December to boost the payments in the year-end package to $2,000. Senate Minority Leader Chuck Schumer, D-N.Y., considers sending more money to Americans a top priority when his party takes control of the chamber.

"Democrats wanted to do much more in the last bill and promised to do more, if given the opportunity, to increase direct payments to a total of $2,000 — we will get that done," he wrote in a letter to Senate Democrats on Tuesday.

"We will also further support vaccine distribution efforts and help American families, small businesses, schools and state and local governments. As soon as the new Senate is organized and Vice-President Harris has been sworn in, we will immediately set to work to deliver on that goal," he said.

Democrats will have to balance tricky political dynamics to get a bill through Congress, as Republicans have signaled a renewed focus on budget deficits now that a Democratic president is set to take the reins.

The Biden plan would not raise any revenue to offsets the costs, according to a senior administration official. The Biden official cited historically low interest rates, along with comments from Federal Reserve Chair Jerome Powell and others that the risk of underdoing relief is higher than the danger of overdoing it, in making the case for the spending.

At least one Senate Democrat, Manchin, has joined the GOP in expressing concerns about the cost of further relief. On Friday, he tweeted: "If the next round of stimulus checks goes out they should be targeted to those who need it."

The bill House Democrats passed in December set eligibility for checks the same way the bipartisan package did. Individuals who made up to $75,000 in 2019, and couples filing jointly who earned up to $150,000 that year, received the full amount. The payments were reduced by 5% of every dollar someone makes above those thresholds.

Because it would take more income for a larger $2,000 check to phase out under those terms, individuals who made up to $115,000 would receive some amount of direct cash under the House-passed bill.

While Manchin has cast doubts on the larger payments, Republicans such as Rubio and Hawley have supported them.

Democrats will also face some opposition on state and local government aid. Congress set the issue aside during the latest round of relief talks because McConnell would not send more money to the governments without also passing coronavirus-related liability protections for businesses.

A bipartisan group of lawmakers who wrote a framework for the bill that ultimately became law last month failed to agree on both state and local support and a legal shield for businesses.

Still, Democrats may get a handful of GOP senators to support a bill that includes state and local government relief. Sen. Bill Cassidy of Louisiana, among other Republicans, has warned states and cities will have to lay off first responders if they do not receive more cash from Congress.