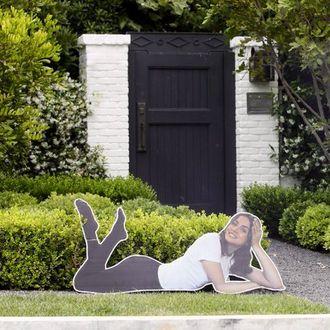 Ah, to have a disposable arts and crafts budget while in quarantine. As alerted to us by the celebrity stan account that has been blocked by the actress herself, Ana de Armas has seemingly commissioned a cardboard cutout of herself to put in front of her Los Angeles home to … troll the paparazzi? For taking all of those photos of Armas and her new boyfriend Ben Affleck drinking iced coffee, walking a dog, and drinking more iced coffee? Or revenge for the fact that we discovered Affleck’s secret and very dad Instagram page? Jury’s still out. However, Affleck’s three children got in on the glamour pose fun, as they were also spotted giggling and helping Armas find a good spot for the cutout on her lawn.

Ana de Armas trolls the obsessed paparazzi by placing a cardboard cut-out version of herself in the front yard of her current residence. (June 5, 2020) pic.twitter.com/SKmpxq1tDN

Affleck and de Armas have been dating since March, after they met on the set of their upcoming psychological drama Deep Water. They’ve since reveled in typical couple stuff together, like beach photoshoots and mask nuzzling.

Ben Affleck’s kids decided that one Ana de Armas wasn’t enough so they brought a life-size poster cut-out of her to play with outside as well. (June 4, 2020) pic.twitter.com/neX6vZ6ZZa