Sporting News
Share on FacebookShare Share on TwitterTweet
Sporting News is tracking live scoring updates and highlights from Alabama vs. Georgia on Saturday. Follow for complete results from the SEC rivalry game. 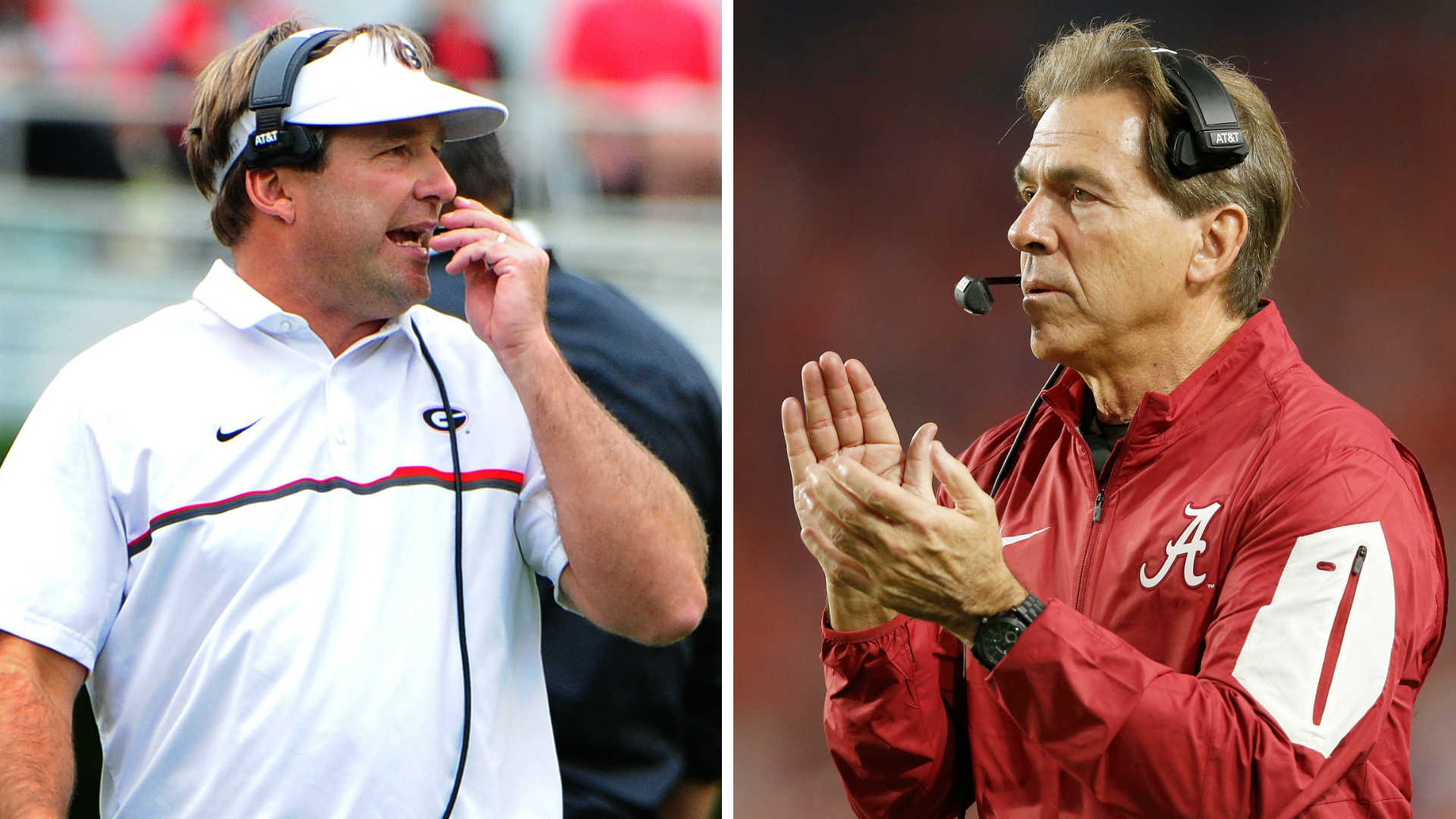 No. 2 Alabama and No. 3 Georgia will face off in an early favorite for game of the year on Saturday.

Each of the last two meetings between the Crimson Tide and Bulldogs, the 2018 SEC championship and 2018 College Football Playoff national championship game, resulted in one-score wins for the Tide. Georgia coach Kirby Smart will look to earn his first win against the Tide since leaving Nick Saban's program to coach Georgia in 2016. Saban, meanwhile, was cleared to coach Saturday after testing producing a positive coronavirus test on Wednesday (later deemed a false positive in accordance with SEC COVID-19 protocols).

Regardless, Saturday's matchup will be a strength-vs.-strength matchup: Alabama boasts the No. 1 offense in the SEC behind quarterback Mac Jones, running back Najee Harris and receivers Jaylen Waddle, DeVonta Smith and John Metchie III. But Georgia boasts the conference's best defense, which allows only 12.3 points and 236.7 yards per game.

Conversely, will Alabama's defense be able to make enough stops vs. Georgia's offense? Or will the Tide defense pick it up after an eye-opening win over Ole Miss? Sporting News is tracking live scoring updates and highlights from Alabama vs. Georgia on Saturday. Follow below for complete results from the SEC rivalry game.

9:22 p.m.: Georgia converts on third-and-2 with a 19-yard connection with George Pickens, his first catch of the game.

9:16 p.m.: Jones is sacked for a small loss on third down; Alabama kicker Will Reichard out to attempt the 33-yard field goal.

9:11 p.m.: Forristal makes a third down-converting catch and immediately falls down. Alabama has it first-and-10 at Georgia's 21.

9:10 p.m.: Eric Stokes is alled for holding on Smith, giving Alabama 10 yards and an automatic first down. Mental error by the DB there gives the Tide a fresh set of downs at the Georgia 33.

9:07 p.m.: Another catch by Smith, this one for 13 yards. However, ones is called for unintentional grounding on the next play, making it second-and-22 from the Alabama 45.

9:06 p.m.: Alabama comes out swinging on their ensuing drive. Jones connects with DeVonta Smith on consecutive passes to get the Tide out to Georgia's 45 (the last pass was nearly intercepted, however).

9:02 p.m: TOUCHDOWN GEORGIA. The Bulldogs' first play of the second quarter is an 82-yard touchdown connection between Bennett and Cook. Alabama linebacker Christian Harris had position to defend it but completely misjudged the ball. That'll make it 14-7 Georgia, the Bulldogs' first lead of the night.

8:57 p.m.: Alabama gets out to near midfield before stalling on the drive. Georgia will take over at its 14-yard line after the punt with just a couple seconds remaining in the quarter.

8:54 p.m.: Jones hit DeVonta Smith for the first time on the crossing route for a 12-yard gain. Bama is driving at its 37-yard line. One play later, Harris grinds for an 11-yard gain to get out to the 48.

8:50 p.m.: Georgia converts on third down with Bennett catching James Cook out of the backfield. Bulldogs have it first-and-goal from the 10.

8:47 p.m.: Receiver Jermaine Burton drops a touchdown pass in the end zone — Bennett's pass was slightly behind, but still very catchable. It's third-and-9 Georgia from Alabama's 20.

8:46 p.m.: On the ensuing play, freshman running back Kendall Milton gashes Alabama for 24 yards straight up the gut. Georgia is driving at the 21, just outside the red zone.

8:45 p.m.: Stetson hits Jackson down the sideline, but the receiver can't bring it in. The Bulldogs will face second-and-10 from Alabaama's 45.

8:44 p.m.: Jones clearly feels pressure on the third-down pass-rush and short-arms it to his open receiver. A 30-yard punt gives Georgia the ball around its 40.

8:43 p.m.: Waddle drops a pass that would have gone for 26 yards to midfield; but it's not all bad. Forristal is out of the locker room and running on his own power.

8:37 p.m.: Waddle gets a decent return, but Patrick Surtain II is called for block in the back. The Tide will take over at their own 7.

8:36 p.m.: Alabama gets off the field on third down; Bennett tried to hit Kearis Jackson, but Alabama's Daniel Wright and Brian Branch double-covered it. Punt team coming on again.

8:30 p.m.: Jones hits Metchie underneath for a 9-yard gain out to the 49. It's fourth-and-1, but the punting unit will come out. Georgia will take over at their 15-yard line.

8:24 p.m.: The Alabama defense forces a Stetson Bennett sack on third-and-long; Dylan Moses and Christian Barmore get the credit. That's an interception and three-and-out by the Tide defense to start the game. Alabama will take back over on its 23.

8:18 p.m.: TOUCHDOWN ALABAMA. On the very next play, Jones hits John Metchie III over the top for a 40-yard touchdown with 13:16 left in the quarter.

8:17 p.m.: Jaylen Waddle takes a tunnel screen 16 yards across midfield for Alabama. Tide are driving at the 40.

8:14 p.m.: INTERCEPTION GEORGIA. The play stands as called on the field. They'll take over at Bama's 41.

8:11 p.m.: Already there's a huge play by Georgia. On the first play from scrimmage, linebacker Azeez Ojulari knocks pressures Mac Jones and knocks affects his pass; Richard Lecounte is credited for the interception, but it's under review. Meanwhile, tight end Miller Forristal is being looked at by trainers.

8:10 p.m.: Georgia wins the toss and defers. Alabama's offense will take over at the 24-yard line to start the game.

​Alabama's game against Georgia is the second of three "SEC on CBS" broadcasts for the Tide in 2020; the first was a 52-24 win vs. Texas A&M in Week 5; the third will be at LSU in Tiger Stadium on Nov. 14. As for Georgia, this is the first of two "SEC on CBS" broadcasts.The Bulldogs' second appearance will occur on Nov. 7 against Florida in Jacksonville, Fla.